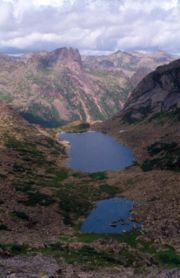 The Sayan Mountains are a mountain range
Mountain range
A mountain range is a single, large mass consisting of a succession of mountains or narrowly spaced mountain ridges, with or without peaks, closely related in position, direction, formation, and age; a component part of a mountain system or of a mountain chain...
between northwestern Mongolia
Mongolia
Mongolia is a landlocked country in East and Central Asia. It is bordered by Russia to the north and China to the south, east and west. Although Mongolia does not share a border with Kazakhstan, its western-most point is only from Kazakhstan's eastern tip. Ulan Bator, the capital and largest...
and southern Siberia
Siberia
Siberia is an extensive region constituting almost all of Northern Asia. Comprising the central and eastern portion of the Russian Federation, it was part of the Soviet Union from its beginning, as its predecessor states, the Tsardom of Russia and the Russian Empire, conquered it during the 16th...
, Russia
Russia
Russia or , officially known as both Russia and the Russian Federation , is a country in northern Eurasia. It is a federal semi-presidential republic, comprising 83 federal subjects...
.

While the general elevation is 2000 to 2700 m (8,858 ft), granite
Granite
Granite is a common and widely occurring type of intrusive, felsic, igneous rock. Granite usually has a medium- to coarse-grained texture. Occasionally some individual crystals are larger than the groundmass, in which case the texture is known as porphyritic. A granitic rock with a porphyritic...
s and metamorphic slate
Slate
Slate is a fine-grained, foliated, homogeneous metamorphic rock derived from an original shale-type sedimentary rock composed of clay or volcanic ash through low-grade regional metamorphism. The result is a foliated rock in which the foliation may not correspond to the original sedimentary layering...
s reach altitudes of over 3000 m (9,843 ft), with the highest being Mönkh Saridag at 3492 m (11,457 ft). The principal mountain pass
Mountain pass
A mountain pass is a route through a mountain range or over a ridge. If following the lowest possible route, a pass is locally the highest point on that route...
es lie 1800 to 2300 m (7,546 ft) above the sea, for example Muztagh pass at 2280 m (7,480 ft), Mongol pass at 1980 m (6,496 ft), Tenghyz pass at 2280 m (7,480 ft) and Obo-sarym pass at 1860 m (6,102 ft).

At 92°E the system (the Western Sayan) is pierced by the Ulug-Khem or Upper Yenisei River
Yenisei River
Yenisei , also written as Yenisey, is the largest river system flowing to the Arctic Ocean. It is the central of the three great Siberian rivers that flow into the Arctic Ocean...
, and at 106°, at its eastern extremity, it terminates above the depression of the Selenga
Selenga
The Selenge is a major river in Mongolia and Buryatia, Russia. Its source rivers are the Ider River and the Delgermörön river. It flows into Lake Baikal and has a length of 616 miles...
-Orkhon Valley
Orkhon Valley
Orkhon Valley Cultural Landscape sprawls along the banks of the Orkhon River in Central Mongolia, some 360 km west from the capital Ulaanbaatar. It was inscribed by UNESCO in the World Heritage List as representing evolution of nomadic pastoral traditions spanning more than two millennia...
. From the Mongolian plateau
Mongolian Plateau
The Mongolian Plateau is part of the larger Central Asian Plateau and has an area of approximately 2,600,000 square kilometres. It is occupied by Mongolia in the north and Inner Mongolia in the south. The plateau includes the Gobi Desert as well as dry steppe regions...
the ascent is on the whole gentle, but from the plains of Siberia it is much steeper, despite the fact that the range is masked by a broad belt of subsidiary ranges of an Alpine character, e.g. the Usinsk, Oya, Tunka
Tunka range
The Tunka range is a part of the Eastern Sayan.Coordinates: 52°N 101°E - 52°N 103°ELength:180 kmHighest summit: 3156 mRivers: Irkut and other tributaries of Angara River-Russian:...
and Kitoi
Kitoi range
The Kitoy Range is a part of the Eastern Sayan.Length:180 kmHighest summit: 3215 mRivers: Kitoy and other tributaries of Angara River...
ranges.

Between the breach of the Yenisei and Lake Khövsgöl at 100° 30' E. the system bears also the name of Yerghik-taiga. The flora is on the whole poor, although the higher regions carry good forests of larch
Larch
Larches are conifers in the genus Larix, in the family Pinaceae. Growing from 15 to 50m tall, they are native to much of the cooler temperate northern hemisphere, on lowlands in the north and high on mountains further south...
, pine
Pine
Pines are trees in the genus Pinus ,in the family Pinaceae. They make up the monotypic subfamily Pinoideae. There are about 115 species of pine, although different authorities accept between 105 and 125 species.-Etymology:...
, juniper
Juniper
Junipers are coniferous plants in the genus Juniperus of the cypress family Cupressaceae. Depending on taxonomic viewpoint, there are between 50-67 species of juniper, widely distributed throughout the northern hemisphere, from the Arctic, south to tropical Africa in the Old World, and to the...
, birch
Birch
Birch is a tree or shrub of the genus Betula , in the family Betulaceae, closely related to the beech/oak family, Fagaceae. The Betula genus contains 30–60 known taxa...
, and alder
Alder
Alder is the common name of a genus of flowering plants belonging to the birch family . The genus comprises about 30 species of monoecious trees and shrubs, few reaching large size, distributed throughout the North Temperate Zone and in the Americas along the Andes southwards to...
, with rhododendron
Rhododendron
Rhododendron is a genus of over 1 000 species of woody plants in the heath family, most with showy flowers...
s and species of Berberis
Berberis
Berberis , the barberries or pepperidge bushes, is a genus of about 450-500 species of deciduous and evergreen shrubs from 1-5 m tall with thorny shoots, native to the temperate and subtropical regions of Europe, Asia, Africa, North America and South America. They are closely related to the genus...
and Ribes
Ribes
Ribes is a genus of about 150 species of flowering plants native throughout the temperate regions of the Northern Hemisphere. It is usually treated as the only genus in the family Grossulariaceae. Seven subgenera are recognized....
. Lichens and mosses clothe many of the boulders that are scattered over the upper slopes.