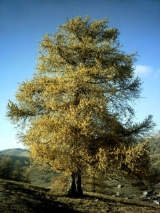 Encyclopedia
Larches are conifers in the genus Larix, in the family Pinaceae
Pinaceae
Pinaceae are trees or shrubs, including many of the well-known conifers of commercial importance such as cedars, firs, hemlocks, larches, pines and spruces. The family is included in the order Pinales, formerly known as Coniferales. Pinaceae are supported as monophyletic by its protein-type sieve...
. Growing from 15 to 50m tall, they are native to much of the cooler temperate northern hemisphere, on lowlands in the north and high on mountains further south. Larch are among the dominant plants in the immense boreal forest
Taiga
Taiga , also known as the boreal forest, is a biome characterized by coniferous forests.Taiga is the world's largest terrestrial biome. In North America it covers most of inland Canada and Alaska as well as parts of the extreme northern continental United States and is known as the Northwoods...
s of Russia
Russia
Russia or , officially known as both Russia and the Russian Federation , is a country in northern Eurasia. It is a federal semi-presidential republic, comprising 83 federal subjects...
and Canada
Canada
Canada is a North American country consisting of ten provinces and three territories. Located in the northern part of the continent, it extends from the Atlantic Ocean in the east to the Pacific Ocean in the west, and northward into the Arctic Ocean...
.

Although a conifer, the larch is a deciduous
Deciduous
Deciduous means "falling off at maturity" or "tending to fall off", and is typically used in reference to trees or shrubs that lose their leaves seasonally, and to the shedding of other plant structures such as petals after flowering or fruit when ripe...
tree
Tree
A tree is a perennial woody plant. It is most often defined as a woody plant that has many secondary branches supported clear of the ground on a single main stem or trunk with clear apical dominance. A minimum height specification at maturity is cited by some authors, varying from 3 m to...
and loses its leaves in the autumn. The shoots are dimorphic, with growth divided into long shoots typically 10–50 centimetres long and bearing several bud
Bud
In botany, a bud is an undeveloped or embryonic shoot and normally occurs in the axil of a leaf or at the tip of the stem. Once formed, a bud may remain for some time in a dormant condition, or it may form a shoot immediately. Buds may be specialized to develop flowers or short shoots, or may have...
s, and short shoots only 1–2 mm long with only a single bud. The leaves
Leaf
A leaf is an organ of a vascular plant, as defined in botanical terms, and in particular in plant morphology. Foliage is a mass noun that refers to leaves as a feature of plants....
are needle-like, 2–5 centimetres long, slender (under 1 cm wide). They are borne singly, spirally arranged on the long shoots, and in dense clusters of 20–50 needles on the short shoots. The needles turn yellow and fall in the late autumn, leaving the trees leafless through the winter.

Larch cones
Conifer cone
A cone is an organ on plants in the division Pinophyta that contains the reproductive structures. The familiar woody cone is the female cone, which produces seeds. The male cones, which produce pollen, are usually herbaceous and much less conspicuous even at full maturity...
are erect, small, 1–9 cm long, green or purple, ripening brown 5–8 months after pollination; in about half the species the bract scales are long and visible, and in the others, short and hidden between the seed scales. Those native to northern regions have small cones (1–3 cm) with short bracts, with more southerly species tending to have longer cones (3–9 cm), often with exserted bracts, with the longest cones and bracts produced by the southernmost species, in the Himalaya. 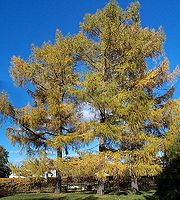 There are 10–15 species; those marked with an asterisk (*) in the list below are not accepted as distinct species by all authorities. In the past, the cone bract length was often used to divide the larches into two sections (sect. Larix with short bracts, and sect. Multiserialis with long bracts), but genetic evidence does not support this division, pointing instead to a genetic divide between Old World
Old World
The Old World consists of those parts of the world known to classical antiquity and the European Middle Ages. It is used in the context of, and contrast with, the "New World" ....
and New World
New World
The New World is one of the names used for the Western Hemisphere, specifically America and sometimes Oceania . The term originated in the late 15th century, when America had been recently discovered by European explorers, expanding the geographical horizon of the people of the European middle...
species, with the cone and bract size being merely adaptations to climatic conditions. More recent genetic studies have proposed three groups within the genus, with a primary division into North American and Eurasian species, and a secondary division of the Eurasian into northern short-bracted species and southern long-bracted species; there is some dispute over the position of Larix sibirica, a short-bracted species which is placed in the short-bracted group by some of the studies and the long-bracted group by others. 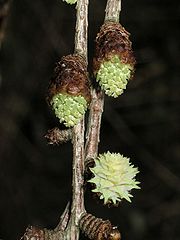 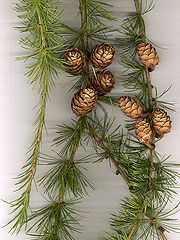 Most if not all of the species can be hybridised in cultivation. The best known hybrid is the Dunkeld Larch Larix × marschlinsii (syn. L. × eurolepis, an illegitimate name), which arose more or less simultaneously in Switzerland and Scotland when L. decidua and L. kaempferi hybridised when planted together.

Larch is used as a food plant by the larva
Larva
A larva is a distinct juvenile form many animals undergo before metamorphosis into adults. Animals with indirect development such as insects, amphibians, or cnidarians typically have a larval phase of their life cycle...
e of a number of Lepidoptera
Lepidoptera
Lepidoptera is a large order of insects that includes moths and butterflies . It is one of the most widespread and widely recognizable insect orders in the world, encompassing moths and the three superfamilies of butterflies, skipper butterflies, and moth-butterflies...
species - see list of Lepidoptera that feed on larches.

Larches are prone to the fungal
Fungus
A fungus is a member of a large group of eukaryotic organisms that includes microorganisms such as yeasts and molds , as well as the more familiar mushrooms. These organisms are classified as a kingdom, Fungi, which is separate from plants, animals, and bacteria...
canker
Canker
Canker and anthracnose are general terms for a large number of different plant diseases, characterised by broadly similar symptoms including the appearance of small areas of dead tissue, which grow slowly, often over a period of years. Some are of only minor consequence, but others are ultimately...
disease Lachnellula willkommii (Larch Canker); this is particularly a problem on sites prone to late spring frosts, which cause minor injuries to the tree allowing entry to the fungal spores.

Larch is a wood
Wood
Wood is a hard, fibrous tissue found in many trees. It has been used for hundreds of thousands of years for both fuel and as a construction material. It is an organic material, a natural composite of cellulose fibers embedded in a matrix of lignin which resists compression...
valued for its tough, waterproof and durable qualities; top quality knot-free timber is in great demand for building yacht
Yacht
A yacht is a recreational boat or ship. The term originated from the Dutch Jacht meaning "hunt". It was originally defined as a light fast sailing vessel used by the Dutch navy to pursue pirates and other transgressors around and into the shallow waters of the Low Countries...
s and other small boat
Boat
A boat is a watercraft of any size designed to float or plane, to provide passage across water. Usually this water will be inland or in protected coastal areas. However, boats such as the whaleboat were designed to be operated from a ship in an offshore environment. In naval terms, a boat is a...
s, for exterior cladding of buildings and interior panelling. The timber is resistant to rot when in contact with the ground, and is suitable for use as posts and in fencing. The hybrid Dunkeld Larch is widely grown as a timber
Timber
Timber may refer to:* Timber, a term common in the United Kingdom and Australia for wood materials * Timber, Oregon, an unincorporated community in the U.S...
crop in northern Europe, valued for its fast growth and disease resistance.

In central Europe
Central Europe
Central Europe or alternatively Middle Europe is a region of the European continent lying between the variously defined areas of Eastern and Western Europe...
larch is viewed as one of the best wood materials for the building of residences. Planted on borders with birch, both tree species were used in pagan "sagged" cremations. One "sąg" of wood was required for a cremation
Cremation
Cremation is the process of reducing bodies to basic chemical compounds such as gasses and bone fragments. This is accomplished through high-temperature burning, vaporization and oxidation....
stack. Sąg is sometimes used today as a Polish forestry unit measuring approximately 4 × 1 × 1 m.

Larches are often used in bonsai
Bonsai
is a Japanese art form using miniature trees grown in containers. Similar practices exist in other cultures, including the Chinese tradition of penjing from which the art originated, and the miniature living landscapes of Vietnamese hòn non bộ...
culture, where their knobby bark, small needles, fresh spring foliage and especially autumn colour are appreciated. European Larch
European Larch
Larix decidua, common name European larch, is a species of larch native to the mountains of central Europe, in the Alps and Carpathians, with disjunct lowland populations in northern Poland and southern Lithuania.-Description:...
, Japanese Larch
Japanese Larch
Japanese Larch is a species of larch native to Japan, in the mountains of Chūbu and Kantō regions in central Honshū....
and Tamarack Larch
Tamarack Larch
Tamarack Larch, or Tamarack, or Hackmatack, or American Larch is a species of larch native to Canada, from eastern Yukon and Inuvik, Northwest Territories east to Newfoundland, and also south into the northeastern United States from Minnesota to Cranesville Swamp, West Virginia; there is also a...
are the species most commonly trained as bonsai.