Encyclopedia
San Agustin Church is a Roman Catholic church under the auspices of The Order of St. Augustine
Augustinians
The term Augustinians, named after Saint Augustine of Hippo , applies to two separate and unrelated types of Catholic religious orders:...
, located inside the historic walled city of Intramuros in Manila
Manila
Manila is the capital of the Philippines. It is one of the sixteen cities forming Metro Manila.Manila is located on the eastern shores of Manila Bay and is bordered by Navotas and Caloocan to the north, Quezon City to the northeast, San Juan and Mandaluyong to the east, Makati on the southeast,...
. Completed by 1607, it is the oldest church still standing in the Philippines
Philippines
The Philippines , officially known as the Republic of the Philippines , is a country in Southeast Asia in the western Pacific Ocean. To its north across the Luzon Strait lies Taiwan. West across the South China Sea sits Vietnam...
. No other surviving building in the Philippines has been claimed to pre-date San Agustin Church.

The present structure is actually the third Augustinian church erected on the site. The first San Agustin Church was the first religious structure constructed by the Spaniards on the island of Luzon
Luzon
Luzon is the largest island in the Philippines. It is located in the northernmost region of the archipelago, and is also the name for one of the three primary island groups in the country centered on the Island of Luzon...
. Made of bamboo
Bamboo
Bamboo is a group of perennial evergreens in the true grass family Poaceae, subfamily Bambusoideae, tribe Bambuseae. Giant bamboos are the largest members of the grass family....
and nipa
Nypa fruticans
Nypa fruticans, known as the attap palm , nipa palm , and mangrove palm or buah atap , buah nipah , dừa nước , Ging Pol in Sinhala in Sri Lanka and gol pata , dani . It is the only palm considered a mangrove in the Mangroves Biome...
, it was completed in 1571, but destroyed by fire in December, 1574 during the attempted invasion of Manila by the forces of Limahong
Limahong
Limahong, Lim Hong or also called Lin Feng was a notorious Chinese pirate and warlord who invaded the northern Philippine Islands in 1574. He built up a reputation for his constant raids to ports in Guangdong, Fujian and southern China...
. A second church made of wood was constructed on the site. This was destroyed in February 1583, in a fire that started when a candle set ablaze the drapes of the funeral bier during the interment of the Spanish Governor-General
Governor-General of the Philippines
The Governor-General of the Philippines was the title of the government executive during the colonial period of the Philippines, governed mainly by Spain and the United States, and briefly by Great Britain, from 1565 to 1935....
Gonzalo Ronquillo de Peñalosa. 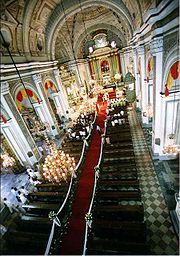 The Augustinians decided to rebuild the church using stone, and to construct as well an adjacent monastery
Monastery
Monastery denotes the building, or complex of buildings, that houses a room reserved for prayer as well as the domestic quarters and workplace of monastics, whether monks or nuns, and whether living in community or alone .Monasteries may vary greatly in size – a small dwelling accommodating only...
. Construction began in 1586, from the design of Juan Macias. The structure was built using hewn adobe
Adobe
Adobe is a natural building material made from sand, clay, water, and some kind of fibrous or organic material , which the builders shape into bricks using frames and dry in the sun. Adobe buildings are similar to cob and mudbrick buildings. Adobe structures are extremely durable, and account for...
stones quarried from Meycauayan
Meycauayan, Bulacan
The City of Meycauayan is a 1st Class, highly urbanized city in the province of Bulacan, Philippines. The city is located about 19 km north of Manila and about 22 km south of Malolos City, the provincial capital city. It is bounded by the town of Marilao to the north, Valenzuela City to...
, Binangonan and San Mateo, Rizal
San Mateo, Rizal
San Mateo, Rizal is a first class urban municipality of Rizal Province. Located on the island of Luzon, San Mateo is one of 13 municipalities and a capital city that make up the Province of Rizal, Region 4-A of the Philippines. San Mateo is part of the Metro Luzon Urban Beltway...
. The work proceeded slowly due to the lack of funds and materials, as well as the relative scarcity of stone artisans. The monastery was operational by 1604, and the church was formally declared complete on January 19, 1607, and named St. Paul of Manila. Macias, who had died before the completion of the church, was officially acknowledged by the Augustinians as the builder of the edifice.
San Agustin Church was looted by the British
Great Britain
Great Britain or Britain is an island situated to the northwest of Continental Europe. It is the ninth largest island in the world, and the largest European island, as well as the largest of the British Isles...
forces which occupied Manila in 1762 during the Seven Years' War
Seven Years' War
The Seven Years' War was a global military war between 1756 and 1763, involving most of the great powers of the time and affecting Europe, North America, Central America, the West African coast, India, and the Philippines...
. In 1854, the church was renovated under the supervision of architect Luciano Oliver. Nine years later, on June 3, 1863, the strongest earthquake at that time, hit Manila leaving widespread destruction to the city with San Agustin Church, the only public building left undamaged in the city. A series of strong earthquakes struck Manila again in 1880 - from the 18th of July to the 20th. This time, the tremors left a huge crack on the left bell tower of the church The crack was eventually repaired but the left tower was permanently removed as it appears today. The church withstood the other major earthquakes that struck Manila before in 1645, 1699, 1754, 1796, 1825 and 1852.

On August 18, 1898, the church was the site where Spanish Governor-General Fermin Jaudenes prepared the terms for the surrender of Manila to the United States of America following the Spanish-American War
Spanish-American War
The Spanish–American War was a conflict in 1898 between Spain and the United States, effectively the result of American intervention in the ongoing Cuban War of Independence...
.
During the Japanese occupation of the Philippines during World War II
World War II
World War II, or the Second World War , was a global conflict lasting from 1939 to 1945, involving most of the world's nations—including all of the great powers—eventually forming two opposing military alliances: the Allies and the Axis...
, San Agustin Church was turned into a concentration camp for prisoners. In the final days of the Battle of Manila, hundreds of Intramuros residents and clergy were held hostage in the church by Japanese soldiers
Imperial Japanese Army
-Foundation:During the Meiji Restoration, the military forces loyal to the Emperor were samurai drawn primarily from the loyalist feudal domains of Satsuma and Chōshū...
; many of the hostages would be killed during the three-week long battle. The church itself survived the bombardment of Intramuros by American and Filipino forces with only its roof damaged, the only one of the seven churches in the walled city to remain standing. The adjacent monastery however was totally destroyed, and would be rebuilt in the 1970s as a museum under the design of architect Angel Nakpil. 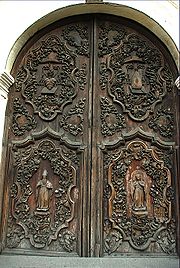 San Agustín Church measures 67.15 meters long and 24.93 meters wide.. Its elliptical foundation has allowed it to withstand the numerous earthquakes that have destroyed many other Manila churches. It is said that the design was derived from churches built by the Augustinians in Mexico
Mexico
The United Mexican States , commonly known as Mexico , is a federal constitutional republic in North America. It is bordered on the north by the United States; on the south and west by the Pacific Ocean; on the southeast by Guatemala, Belize, and the Caribbean Sea; and on the east by the Gulf of...
. The facade is unassuming and even criticized as "lacking grace and charm", but it has notable baroque
Baroque architecture
Baroque architecture is a term used to describe the building style of the Baroque era, begun in late sixteenth century Italy, that took the Roman vocabulary of Renaissance architecture and used it in a new rhetorical and theatrical fashion, often to express the triumph of the Catholic Church and...
touches, especially the ornate carvings on its wooden doors. The church courtyard is graced by several granite sculptures of lions, which had been gifted by Chinese
China
Chinese civilization may refer to:* China for more general discussion of the country.* Chinese culture* Greater China, the transnational community of ethnic Chinese.* History of China* Sinosphere, the area historically affected by Chinese culture...
converts to Catholicism.

The church interior is in the form of a Latin cross. The church has 14 side chapels and a trompe-l'œil ceiling painted in 1875 by Italian
Italy
Italy , officially the Italian Republic languages]] under the European Charter for Regional or Minority Languages. In each of these, Italy's official name is as follows:;;;;;;;;), is a unitary parliamentary republic in South-Central Europe. To the north it borders France, Switzerland, Austria and...
artists Cesare Alberoni and Giovanni Dibella. Up in the choir loft are hand-carved 17th-century seats of molave, a beautiful tropical hardwood.

San Agustin Church also hosts an image of Our Lady of Consolation (Nuestra Senora de Consolacion y Correa), which was canonically crowned by Manila Archbishop Cardinal Jaime Sin in 2000.
The source of this article is wikipedia, the free encyclopedia.  The text of this article is licensed under the GFDL.