Encyclopedia
Ruggero Leoncavallo was an Italian opera
Opera
Opera is an art form in which singers and musicians perform a dramatic work combining text and musical score, usually in a theatrical setting. Opera incorporates many of the elements of spoken theatre, such as acting, scenery, and costumes and sometimes includes dance...
composer
Composer
A composer is a person who creates music, either by musical notation or oral tradition, for interpretation and performance, or through direct manipulation of sonic material through electronic media...
. His two-act work Pagliacci
Pagliacci
Pagliacci , sometimes incorrectly rendered with a definite article as I Pagliacci, is an opera consisting of a prologue and two acts written and composed by Ruggero Leoncavallo. It recounts the tragedy of a jealous husband in a commedia dell'arte troupe...
remains one of the most popular works in the repertory, appearing as number 20 on the Operabase list of the most-performed operas worldwide.

The son of a police magistrate, Leoncavallo was born in Naples
Naples
Naples is a city in Southern Italy, situated on the country's west coast by the Gulf of Naples. Lying between two notable volcanic regions, Mount Vesuvius and the Phlegraean Fields, it is the capital of the region of Campania and of the province of Naples...
on 23 April 1857. As child he moved with his father in the town of Montalto Uffugo
Montalto Uffugo
Montalto Uffugo is a town and comune of the province of Cosenza in the Calabria region of southern Italy.-External links:* - Hosts images and extractions of vital records for the residents of Montalto Uffugo....
in Calabria
Calabria
Calabria , in antiquity known as Bruttium, is a region in southern Italy, south of Naples, located at the "toe" of the Italian Peninsula. The capital city of Calabria is Catanzaro....
where Leoncavallo lived during his adolescence. He later returned to Naples and was educated at the city's San Pietro a Majella Conservatory. After some years spent teaching and in ineffective attempts to obtain the production of more than one opera, he saw the enormous success of Pietro Mascagni
Pietro Mascagni
Pietro Antonio Stefano Mascagni was an Italian composer most noted for his operas. His 1890 masterpiece Cavalleria rusticana caused one of the greatest sensations in opera history and single-handedly ushered in the Verismo movement in Italian dramatic music...
's Cavalleria rusticana
Cavalleria rusticana
Cavalleria rusticana is an opera in one act by Pietro Mascagni to an Italian libretto by Giovanni Targioni-Tozzetti and Guido Menasci, adapted from a play written by Giovanni Verga based on his short story. Considered one of the classic verismo operas, it premiered on May 17, 1890 at the Teatro...
in 1890, and he wasted no time in producing his own verismo
Verismo
Verismo was an Italian literary movement which peaked between approximately 1875 and the early 1900s....
hit, Pagliacci
Pagliacci
Pagliacci , sometimes incorrectly rendered with a definite article as I Pagliacci, is an opera consisting of a prologue and two acts written and composed by Ruggero Leoncavallo. It recounts the tragedy of a jealous husband in a commedia dell'arte troupe...
. (According to Leoncavallo, the plot of this work had a real-life origin: he claimed it derived from a murder trial, in Montalto Uffugo, over which his father had presided.)

Pagliacci was performed in Milan
Milan
Milan is the second-largest city in Italy and the capital city of the region of Lombardy and of the province of Milan. The city proper has a population of about 1.3 million, while its urban area, roughly coinciding with its administrative province and the bordering Province of Monza and Brianza ,...
in 1892 with immediate success; today it is the only work by Leoncavallo in the standard operatic repertory. Its most famous aria "Vesti la giubba
Vesti la giubba
"Vesti la giubba" is a famous tenor aria from Ruggero Leoncavallo's 1892 opera Pagliacci. "Vesti la giubba" is the conclusion of the first act, when Canio discovers his wife's infidelity, but must nevertheless prepare for his performance as Pagliaccio the clown because "the show must go on".The...
" ("Put on the costume" or, in the better-known older translation, "On with the motley") was recorded by Enrico Caruso and laid claim to being the world's first record to sell a million copies (although this is probably a total of Caruso's various versions of it made in 1902, 1904 and 1907).

The next year his I Medici was also produced in Milan, but neither it nor Chatterton
Chatterton (opera)
Chatterton is a dramma lirico or opera in three acts by Ruggiero Leoncavallo. The libretto was written by the composer himself and is freely adapted from the life of the young English poet from Bristol, Thomas Chatterton .Considered by the romantics as the perfect archetype of the accursed poet,...
(belatedly produced in 1896)—both early works—obtained much lasting favour. Much of Chatterton, however, was recorded by the Gramophone Company (later HMV
HMV
His Master's Voice is a trademark in the music business, and for many years was the name of a large record label. The name was coined in 1899 as the title of a painting of the dog Nipper listening to a wind-up gramophone...
) as early as 1908, and remastered on CD almost 100 years later by Marston Records. Leoncavallo himself conducts the performance.

It was not until Leoncavallo's La bohème
La bohème (Leoncavallo)
La bohème is an Italian opera in four acts, with music and libretto by Ruggero Leoncavallo, based on Scènes de la vie de bohème by Henri Murger. The opera received its premiere at the Teatro la Fenice, Venice on May 6, 1897....
was performed in 1897 in Venice
Venice
Venice is a city in northern Italy which is renowned for the beauty of its setting, its architecture and its artworks. It is the capital of the Veneto region...
that his talent obtained public confirmation. However, it was outshone by Puccini
Giacomo Puccini
Giacomo Antonio Domenico Michele Secondo Maria Puccini was an Italian composer whose operas, including La bohème, Tosca, Madama Butterfly, and Turandot, are among the most frequently performed in the standard repertoire...
's opera of the same name
La bohème
La bohème is an opera in four acts,Puccini called the divisions quadro, a tableau or "image", rather than atto . by Giacomo Puccini to an Italian libretto by Luigi Illica and Giuseppe Giacosa, based on Scènes de la vie de bohème by Henri Murger...
and on the same subject, which was premiered in 1896. Two tenor arias from Leoncavallo's version are still occasionally performed, especially in Italy.

Subsequent operas by Leoncavallo were 1900's Zazà (the opera of Geraldine Farrar
Geraldine Farrar
Geraldine Farrar was an American soprano opera singer and film actress, noted for her beauty, acting ability, and "the intimate timbre of her voice." She had a large following among young women, who were nicknamed "Gerry-flappers".- Early life and opera career :Farrar was born in Melrose,...
's famous farewell performance at the Met
Metropolitan Opera
The Metropolitan Opera is an opera company, located in New York City. Originally founded in 1880, the company gave its first performance on October 22, 1883. The company is operated by the non-profit Metropolitan Opera Association, with Peter Gelb as general manager...
), and 1904's Der Roland von Berlin. He had a brief success with Gli zingari which premiered in Italian in London in 1912, with a long run at the Hippodrome Theatre. Gli zingari also reached the United States but soon disappeared from the repertoire.

After a series of operettas, Leoncavallo tried for one last serious effort (Edipo Re), but he died before he could finish the orchestration, which was completed by Giovanni Pennacchio. From the 1970s the opera has had a number of revivals, both as concert performances (including Rome 1972, Amsterdam 1977 and Vienna
Konzerthaus, Vienna
The Konzerthaus in Vienna was opened 1913. It is situated in the third district just at the edge of the first district in Vienna. Since it was founded it has always tried to emphasise both tradition and innovative musical styles.In 1890 the first ideas for a Haus für Musikfeste came about...
1998) as well as fully staged productions in Turin in 2002 and the Thessaloniki Opera 2008. In Edipo Re (a short one act work) the composer uses exactly the same melody for the final scene Miei poveri fior, per voi non più sole... (with the blinded Edipo) as he had for the Act IV Soprano aria from Der Roland von Berlin. It has been assumed (see The New Grove Dictionary of Opera) that Leoncavallo left the opera more or less complete (except for the orchestration), but Pennacchio may have had to do more and may have 'filled in the gaps' using Leoncavallo's earlier music. Unusually, Leoncavallo did not write the libretto. The libretto for Edipo Re was written by Giovacchino Forzano
Giovacchino Forzano
Giovacchino Forzano was an Italian playwright, librettist, stage director, and film director. A resourceful writer, he produced opera librettos for most of the major Italian composers of the early twentieth century, including the librettos for Giacomo Puccini's Suor Angelica and Gianni...
, who also wrote Il piccolo Marat
Il piccolo Marat
Il piccolo Marat is a dramma lirico or opera in three acts by Pietro Mascagni, 1921, from a libretto by Giovacchino Forzano.-Performance history:...
for Pietro Mascagni
Pietro Mascagni
Pietro Antonio Stefano Mascagni was an Italian composer most noted for his operas. His 1890 masterpiece Cavalleria rusticana caused one of the greatest sensations in opera history and single-handedly ushered in the Verismo movement in Italian dramatic music...
and two of the one-act operas for Puccini's Il trittico
Il trittico
Il trittico is the title of a collection of three one-act operas, Il tabarro, Suor Angelica, and Gianni Schicchi, by Giacomo Puccini...
.

Little or nothing from Leoncavallo's other operas is heard today, but the baritone arias from Zazà were great concert and recording favourites among baritones and Zazà as a whole is sometimes revived, as is his La bohème. The tenor arias from La bohème remain recording favorites.

Leoncavallo also composed songs, most famously Mattinata
Mattinata (Leoncavallo)
NOTE: There are actually three songs called "Mattinata," each set to its own words. This article details the second song. The three are:* Mattinatafirst line - "Mary, tremando"words - anonymousmusic - Tostidate - 1897* Mattinata...
, which he wrote for the Gramophone Company (which became HMV) with Caruso's unique voice in mind. On 8 April 1904, Leoncavallo accompanied Caruso at the piano as they recorded the song. On December 8, 1905 he recorded five of his own pieces for the reproducing piano Welte-Mignon
Welte-Mignon
M. Welte & Sons, Freiburg and New York was a manufacturer of orchestrions, organs and reproducing pianos, established in Vöhrenbach by Michael Welte in 1832.-Overview:...
.

Leoncavallo was the librettist for most of his own operas. Many considered him the greatest Italian librettist of his time after Boito
Arrigo Boito
Arrigo Boito , aka Enrico Giuseppe Giovanni Boito, pseudonym Tobia Gorrio, was an Italian poet, journalist, novelist and composer, best known today for his libretti, especially those for Giuseppe Verdi's operas Otello and Falstaff, and his own opera Mefistofele...
. Among Leoncavallo's libretti for other composers is his contribution to the libretto for Puccini's Manon Lescaut
Manon Lescaut (Puccini)
Manon Lescaut is an opera in four acts by Giacomo Puccini. The story is based on the 1731 novel L’histoire du chevalier des Grieux et de Manon Lescaut by the Abbé Prévost....
. 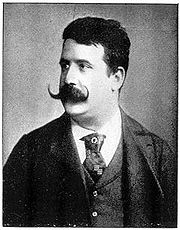