Encyclopedia
Chatterton is a dramma lirico or opera
Opera
Opera is an art form in which singers and musicians perform a dramatic work combining text and musical score, usually in a theatrical setting. Opera incorporates many of the elements of spoken theatre, such as acting, scenery, and costumes and sometimes includes dance...
in three acts (four acts in its original 1876 version) by Ruggiero Leoncavallo. The libretto
Libretto
A libretto is the text used in an extended musical work such as an opera, operetta, masque, oratorio, cantata, or musical. The term "libretto" is also sometimes used to refer to the text of major liturgical works, such as mass, requiem, and sacred cantata, or even the story line of a...
was written by the composer himself and is freely adapted from the life of the young English poet from Bristol
Bristol
Bristol is a city, unitary authority area and ceremonial county in South West England, with an estimated population of 433,100 for the unitary authority in 2009, and a surrounding Larger Urban Zone with an estimated 1,070,000 residents in 2007...
, Thomas Chatterton
Thomas Chatterton
Thomas Chatterton was an English poet and forger of pseudo-medieval poetry. He died of arsenic poisoning, either from a suicide attempt or self-medication for a venereal disease.-Childhood:...
(1752–1770).

Considered by the romantics as the perfect archetype of the accursed poet, Chatterton became famous for his brilliant pastiches of medieval poetry, which he attributed to an imaginary 15th-century monk whom he called Thomas Rowley. At the age of 18, to escape his misery, he committed suicide in London by taking poison.

Chatterton, composed in 1876, is the debut opera of a young Leoncavallo freshly graduated from the Naples conservatory
Music Conservatories of Naples
The Music Conservatory of Naples is a music institution in Naples, southern Italy. It is currently located in the complex of San Pietro a Majella.-San Pietro a Majella:...
. However, the composer failed in his attempt to get his work performed because the promoter of the planned production disappeared with Leoncavallo's money shortly before the premiere. Leoncavallo would have to wait until after the financial success of his best known opera, 1892's Pagliacci
Pagliacci
Pagliacci , sometimes incorrectly rendered with a definite article as I Pagliacci, is an opera consisting of a prologue and two acts written and composed by Ruggero Leoncavallo. It recounts the tragedy of a jealous husband in a commedia dell'arte troupe...
, to see Chatterton produced.

The opera finally premiered on March 10, 1896, at the Teatro Drammatico Nazionale
National Dramatic Theatre
The National Dramatic Theatre or National Theatre was a theatre in Rome, now demolished to build Via Nazionale....
, Rome
Rome
Rome is the capital of Italy and the country's largest and most populated city and comune, with over 2.7 million residents in . The city is located in the central-western portion of the Italian Peninsula, on the Tiber River within the Lazio region of Italy.Rome's history spans two and a half...
, in a revised version of the original four-act opera. The work was not successful even after another revision which was completed in 1905. Today, Chatterton is rarely performed. 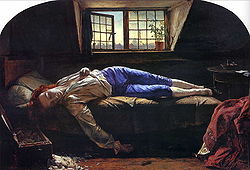 Chatterton lives as a lodger in a wealthy home. Unable to live by his writing, he has to look for a job to support himself. Unfortunately, he can only get a job as a servant. The other aspect of the situation is his thwarted and concealed love for Jenny Clark (Kitty Bell in Vigny's play), the wife of the industrialist who is his landlord. Finally, faced with an impossible love and a menial job, a despairing Chatterton kills himself. He is followed immediately in death by Jenny.