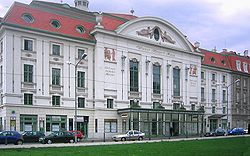 In 1890 the first ideas for a Haus für Musikfeste came about. The idea of the new multi purpose building was to be more interesting to the broader public than the traditional Wiener Musikverein. In addition to the concert hall, the first drawings by Ludwig Baumann
Ludwig Baumann
-References:*German language Wikipedia: Ludwig Baumann. Retrieved October 29, 2005....
for the Olympion included an ice-skating area and a bicycle club. In an attached open air area 40,000 visitors would be able to attend events. The drawings were not accepted. However, today an ice skating area is situated right next to the building.

The building is about 70x40 meters and had originally three halls, in which there can be simultaneous concerts, since they are sound-proofed. The original art nouveau
Art Nouveau
Art Nouveau is an international philosophy and style of art, architecture and applied art—especially the decorative arts—that were most popular during 1890–1910. The name "Art Nouveau" is French for "new art"...
building was partly destroyed during renovations and adaptions, but the building was reconstructed from original sketches in the 1970s. A historic organ
Pipe organ
The pipe organ is a musical instrument that produces sound by driving pressurized air through pipes selected via a keyboard. Because each organ pipe produces a single pitch, the pipes are provided in sets called ranks, each of which has a common timbre and volume throughout the keyboard compass...
was installed in the Konzerthaus by the Austria
Austria
Austria , officially the Republic of Austria , is a landlocked country of roughly 8.4 million people in Central Europe. It is bordered by the Czech Republic and Germany to the north, Slovakia and Hungary to the east, Slovenia and Italy to the south, and Switzerland and Liechtenstein to the...
n firm Rieger
Rieger Orgelbau
Rieger Orgelbau is an Austrian firm of organ builders, known generally as Rieger. The firm was founded by Franz Rieger. From 1873 it was known as Rieger & Söhne, and from 1879 as Gebrüder Rieger, after his sons took over. At the end of World War II, the firm was nationalised by the Czech government...
in 1913. Between 1997 and 2000 the house was completely renovated.

The Konzerthaus has the Vienna Symphony Orchestra
Vienna Symphony Orchestra
-History:In 1900, Ferdinand Löwe founded the orchestra as the Wiener Concertverein . In 1913 it moved into the Konzerthaus, Vienna. In 1919 it merged with the Tonkünstler Orchestra. In 1933 it acquired its current name...
, the Wiener Kammerorchester, the Wiener Singakademie
Wiener Singakademie
As the first mixed choir in Vienna, the Wiener Singakademie was founded in 1858 with the idea to establish a "Singübungsanstalt" . From the beginning, its repertory has been shaped by two major interests: the fostering of the works of the traditional masters, and the inclusion of contemporary works...
and the Klangforum Wien
Klangforum Wien
The Klangforum Wien is an Austrian chamber orchestra, based in Vienna at the Konzerthaus, which specialises in contemporary classical music.Founded by composer and conductor Beat Furrer in 1985, it is run on collective principles, having no official principal conductor. Sylvain Cambreling is...
in residence. Several subscriptions also include concerts by the Vienna Philharmonic Orchestra
Vienna Philharmonic Orchestra
The Vienna Philharmonic is an orchestra in Austria, regularly considered one of the finest in the world....
and other organizations.

The Wiener Konzerthausgesellschaft also conducts several Festivals during the year.