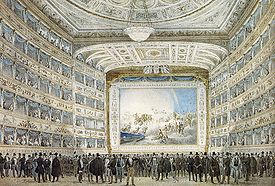 Teatro La Fenice is an opera
Opera
Opera is an art form in which singers and musicians perform a dramatic work combining text and musical score, usually in a theatrical setting. Opera incorporates many of the elements of spoken theatre, such as acting, scenery, and costumes and sometimes includes dance...
house in Venice
Venice
Venice is a city in northern Italy which is renowned for the beauty of its setting, its architecture and its artworks. It is the capital of the Veneto region...
, Italy
Italy
Italy , officially the Italian Republic languages]] under the European Charter for Regional or Minority Languages. In each of these, Italy's official name is as follows:;;;;;;;;), is a unitary parliamentary republic in South-Central Europe. To the north it borders France, Switzerland, Austria and...
. It is one of the most famous theatres in Europe, the site of many famous operatic premieres. Its name reflects its role in permitting an opera company to "rise from the ashes" despite losing the use of two theatres (to fire and legal problems respectively). Since opening and being named La Fenice, it has burned and been rebuilt twice more. 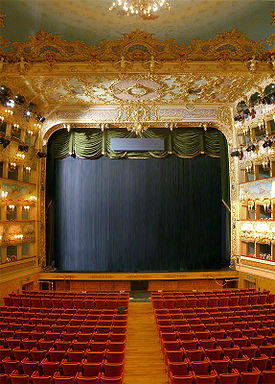 In 1774, the San Benedetto Theatre, which had been Venice's leading opera house for more than forty years, burned to the ground. No sooner had it been rebuilt than a legal dispute broke out between the company managing it and the owners, the Venier family. The issue was decided in favor of the Veniers.
The construction began in June 1790, and by May 1792 the theatre was completed. It was named "La Fenice", in reference to the company's survival, first of the fire, then of the loss of its former quarters. La Fenice was inaugurated on May 16, 1792 with an opera by Giovanni Paisiello
Giovanni Paisiello
Giovanni Paisiello was an Italian composer of the Classical era.-Life:Paisiello was born at Taranto and educated by the Jesuits there. He became known for his beautiful singing voice and in 1754 was sent to the Conservatorio di S. Onofrio at Naples, where he studied under Francesco Durante, and...
entitled I Giuochi di Agrigento (libretto by count Alessandro Pepoli).

From the beginning of the 19th century, La Fenice acquired a European reputation. Rossini
Gioacchino Rossini
Gioachino Antonio Rossini was an Italian composer who wrote 39 operas as well as sacred music, chamber music, songs, and some instrumental and piano pieces...
mounted two major productions in the theatre and Bellini
Vincenzo Bellini
Vincenzo Salvatore Carmelo Francesco Bellini was an Italian opera composer. His greatest works are I Capuleti ed i Montecchi , La sonnambula , Norma , Beatrice di Tenda , and I puritani...
had two operas premiered there. Donizetti
Gaetano Donizetti
Domenico Gaetano Maria Donizetti was an Italian composer from Bergamo, Lombardy. His best-known works are the operas L'elisir d'amore , Lucia di Lammermoor , and Don Pasquale , all in Italian, and the French operas La favorite and La fille du régiment...
, fresh from his triumphs in Milan
La Scala
La Scala , is a world renowned opera house in Milan, Italy. The theatre was inaugurated on 3 August 1778 and was originally known as the New Royal-Ducal Theatre at La Scala...
and Naples, returned to Venice in 1836, after an absence of seventeen years.

In December 1836, disaster struck again when the theatre was destroyed by fire. However, it was quickly rebuilt with a design provided by the architect-engineer team of the brothers, Tommaso and Giovanni Battista Meduna. La Fenice once again rose from its ashes to open its doors on the evening of December 26, 1837.

During the First World War
World War I
World War I , which was predominantly called the World War or the Great War from its occurrence until 1939, and the First World War or World War I thereafter, was a major war centred in Europe that began on 28 July 1914 and lasted until 11 November 1918...
, La Fenice was closed, but reopened to again become the scene of much activity, attracting many of the world's greatest singers and conductors. In 1930, the Venice Biennale
Venice Biennale
The Venice Biennale is a major contemporary art exhibition that takes place once every two years in Venice, Italy. The Venice Film Festival is part of it. So too is the Venice Biennale of Architecture, which is held in even years...
initiated the First International Festival of Contemporary Music, which brought such composers as Stravinsky
Igor Stravinsky
Igor Fyodorovich Stravinsky ; 6 April 1971) was a Russian, later naturalized French, and then naturalized American composer, pianist, and conductor....
and Britten
Benjamin Britten
Edward Benjamin Britten, Baron Britten, OM CH was an English composer, conductor, and pianist. He showed talent from an early age, and first came to public attention with the a cappella choral work A Boy Was Born in 1934. With the premiere of his opera Peter Grimes in 1945, he leapt to...
, and more recently Berio
Luciano Berio
Luciano Berio, Cavaliere di Gran Croce OMRI was an Italian composer. He is noted for his experimental work and also for his pioneering work in electronic music.-Biography:Berio was born at Oneglia Luciano Berio, Cavaliere di Gran Croce OMRI (October 24, 1925 – May 27, 2003) was an Italian...
, Nono
Luigi Nono
Luigi Nono was an Italian avant-garde composer of classical music and remains one of the most prominent composers of the 20th century.- Early years :Born in Venice, he was a member of a wealthy artistic family, and his grandfather was a notable painter...
and Bussotti
Sylvano Bussotti
Sylvano Bussotti is an Italian composer of contemporary music whose work is unusually notated and often creates special problems of interpretation.Born in Florence, Bussotti learned to play the violin as a child, becoming a prodigy...
, to write for La Fenice.

On 29 January 1996, it was completely destroyed by fire. Arson was immediately suspected.
In March 2001, a court in Venice found two electricians guilty of setting the fire. Enrico Carella and his cousin, Massimiliano Marchetti, appeared to have set the building ablaze because their company was facing heavy fines over delays in repair work. Carella, the company's owner, disappeared after a final appeal was turned down. He had been sentenced to seven years in prison. Marchetti surrendered to serve a six-year sentence. Carella was ultimately arrested by Interpol in February 2007 at the Mexico-Belize border, was extradited to Italy, and released on day parole after serving 16 months.

After various delays, reconstruction began in earnest in 2001. In 650 days, a team of two hundred plasterers, artists, woodworkers, and other craftsman succeeded in recreating the ambience of the old theatre at a cost of some €90 million.

La Fenice was rebuilt in 19th-century style on the basis of a design by architect Aldo Rossi
Aldo Rossi
Aldo Rossi was an Italian architect and designer who accomplished the unusual feat of achieving international recognition in four distinct areas: theory, drawing, architecture and product design.-Early life:...
and using still photographs from the opening scenes of Luchino Visconti
Luchino Visconti
Luchino Visconti di Modrone, Count of Lonate Pozzolo was an Italian theatre, opera and cinema director, as well as a screenwriter. He is best known for his films The Leopard and Death in Venice .-Life:...
's 1954 film Senso
Senso (film)
Senso is a 1954 melodrama film, an adaptation of Camillo Boito's Italian novella Senso by the Italian director Luchino Visconti, with Alida Valli as Livia and Farley Granger as Lieutenant Franz Mahler....
, which was filmed in the house, in order to obtain details of its design. It reopened on 14 December 2003 with an inaugural concert of Beethoven
Ludwig van Beethoven
Ludwig van Beethoven was a German composer and pianist. A crucial figure in the transition between the Classical and Romantic eras in Western art music, he remains one of the most famous and influential composers of all time.Born in Bonn, then the capital of the Electorate of Cologne and part of...
, Wagner
Richard Wagner
Wilhelm Richard Wagner was a German composer, conductor, theatre director, philosopher, music theorist, poet, essayist and writer primarily known for his operas...
, and Stravinsky
Igor Stravinsky
Igor Fyodorovich Stravinsky ; 6 April 1971) was a Russian, later naturalized French, and then naturalized American composer, pianist, and conductor....
. The first opera production was La traviata
La traviata
La traviata is an opera in three acts by Giuseppe Verdi set to an Italian libretto by Francesco Maria Piave. It is based on La dame aux Camélias , a play adapted from the novel by Alexandre Dumas, fils. The title La traviata means literally The Fallen Woman, or perhaps more figuratively, The Woman...
in November 2004.

Critical response to the rebuilt La Fenice was mixed. The music critic of the paper Il Tempo, Enrico Cavalotti, was satisfied. He found the colours a bit bright but the sound good and compact. However, for his colleague Dino Villatico of the La Repubblica
La Repubblica
la Repubblica is an Italian daily general-interest newspaper. Founded in 1976 in Rome by the journalist Eugenio Scalfari, as of 2008 is the second largest circulation newspaper, behind the Corriere della Sera.-Foundation:...
the acoustics of the new hall lacked resonance and the colours were painfully bright. He found it "kitsch, a fake imitation of the past". He said that "the city should have had the nerve to build a completely new theater; Venice betrayed its innovative past by ignoring it". However, for many Venetians, a painful wound in the historical, much-admired, much adored cityscape has begun to heal.