Encyclopedia
The Teatro Massimo Vittorio Emanuele is an opera house
Opera house
An opera house is a theatre building used for opera performances that consists of a stage, an orchestra pit, audience seating, and backstage facilities for costumes and set building...
and opera company located on the Piazza Verdi in Palermo
Palermo
Palermo is a city in Southern Italy, the capital of both the autonomous region of Sicily and the Province of Palermo. The city is noted for its history, culture, architecture and gastronomy, playing an important role throughout much of its existence; it is over 2,700 years old...
, Sicily
Sicily
Sicily is a region of Italy, and is the largest island in the Mediterranean Sea. Along with the surrounding minor islands, it constitutes an autonomous region of Italy, the Regione Autonoma Siciliana Sicily has a rich and unique culture, especially with regard to the arts, music, literature,...
. It was dedicated to King Victor Emanuel II.
It is the biggest in Italy, and one of the largest of Europe (the third after the Opéra National de Paris  and the K. K. Hof-Opernhaus
Vienna State Opera
The Vienna State Opera is an opera house – and opera company – with a history dating back to the mid-19th century. It is located in the centre of Vienna, Austria. It was originally called the Vienna Court Opera . In 1920, with the replacement of the Habsburg Monarchy by the First Austrian...
in Vienna
Vienna
Vienna is the capital and largest city of the Republic of Austria and one of the nine states of Austria. Vienna is Austria's primary city, with a population of about 1.723 million , and is by far the largest city in Austria, as well as its cultural, economic, and political centre...
), renowned for its perfect acoustics. 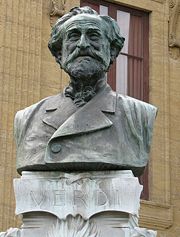 An international competition for the creation of the opera house was announced by the Palermo Council in 1864, primarily at the instigation of the mayor, Antonio Starrabba di Rudinì. For many years there had been talk of building a big new theatre in Palermo, worthy of the second biggest city in southern Italy (after Naples) and designed to promote the image of the city following the recent national unity.

The opera house was designed and overseen by the very genial Italian architect Giovan Battista Filippo Basile and, following his death in 1891, construction was then overseen by his highly artistic son, Architect Ernesto Basile
Ernesto Basile
Ernesto Basile was an Italian architect and an exponent of modernism and Art Nouveau. He became well-known because of his stylistic fusion of ancient, medieval and modern elements. He was one of the pioneers of Art Nouveau in Italy.- Life :He was born on January 31, 1857 in Palermo...
. G. B. Filippo Basile was well known in Sicily also for his previous cathedral
Cathedral
A cathedral is a Christian church that contains the seat of a bishop...
restoration design in the city of Acireale
Acireale
Acireale is a coastal city and commune in the north-east of the province of Catania, Sicily, Italy, at the foot of Mount Etna, on the coast facing the Ionian Sea. It is a diocese, famous for its churches, including the Neo-Gothic St. Peter's Basilica, St...
, as well as garden and villa
Villa
A villa was originally an ancient Roman upper-class country house. Since its origins in the Roman villa, the idea and function of a villa have evolved considerably. After the fall of the Roman Republic, villas became small farming compounds, which were increasingly fortified in Late Antiquity,...
designs in the city of Palermo
Palermo
Palermo is a city in Southern Italy, the capital of both the autonomous region of Sicily and the Province of Palermo. The city is noted for its history, culture, architecture and gastronomy, playing an important role throughout much of its existence; it is over 2,700 years old...
and Caltagirone
Caltagirone
Caltagirone is a town and comune in the province of Catania, on the island of Sicily, about 70 km southwest of Catania. It is bounded by the comuni of Acate, Gela, Grammichele, Licodia Eubea, Mazzarino, Mazzarrone, Mineo, Mirabella Imbaccari, Niscemi, Piazza Armerina, San Michele di...
.

The ' Rutelli & Machi' ' Co., represented by Giovanni Rutelli and Alberto Machi' company's founder members, was the official building contracting company for the entire main construction of the theatre
Theatre
Theatre is a collaborative form of fine art that uses live performers to present the experience of a real or imagined event before a live audience in a specific place. The performers may communicate this experience to the audience through combinations of gesture, speech, song, music or dance...
; the whole construction, from the foundations all the way up to the theatre's attic structures, including all the external decorations of the same building, were completed under Architect Giovanni Rutelli's technical and constructive direction; meanwhile Giovanni Rutelli initially designed a steam tower crane machine which was then successfully able to lift to considerable heights the large stone blocks and Greek
Greeks
The Greeks, also known as the Hellenes , are a nation and ethnic group native to Greece, Cyprus and neighboring regions. They also form a significant diaspora, with Greek communities established around the world....
- roman styled columns during construction of the very large and tall theatre.

The construction started on 12 January 1874 but was stopped for eight years from 1882 till 1890. Finally, on 16 May 1897, twenty-two years after the laying of the foundation stone, the third largest opera theatre, after Palais Garnier
Palais Garnier
The Palais Garnier, , is an elegant 1,979-seat opera house, which was built from 1861 to 1875 for the Paris Opera. It was originally called the Salle des Capucines because of its location on the Boulevard des Capucines in the 9th arrondissement of Paris, but soon became known as the Palais Garnier...
in Paris
Paris
Paris is the capital and largest city in France, situated on the river Seine, in northern France, at the heart of the Île-de-France region...
and the K. K. Hof-Opernhaus in Vienna
Vienna
Vienna is the capital and largest city of the Republic of Austria and one of the nine states of Austria. Vienna is Austria's primary city, with a population of about 1.723 million , and is by far the largest city in Austria, as well as its cultural, economic, and political centre...
, was inaugurated with a performance of Verdi
Giuseppe Verdi
Giuseppe Fortunino Francesco Verdi was an Italian Romantic composer, mainly of opera. He was one of the most influential composers of the 19th century...
's Falstaff
Falstaff (opera)
Falstaff is an operatic commedia lirica in three acts by Giuseppe Verdi, adapted by Arrigo Boito from Shakespeare's plays The Merry Wives of Windsor and scenes from Henry IV. It was Verdi's last opera, written in the composer's ninth decade, and only the second of his 26 operas to be a comedy...
conducted by Leopoldo Mugnone
Leopoldo Mugnone
Leopoldo Mugnone was an Italian conductor, especially of opera, whose most famous work was done in the period 1890-1920, both in Europe and South America...
.

Sculptural busts of famous composers were carved for the theater by the Italian sculptor, Giusto Liva (born in Montebelluna, Treviso in 1847) and several of his sons.

The Teatro Massimo is the largest theatre in Italy (and the third largest opera house in Europe). Basile was inspired by ancient and classical Sicilian architecture and, thus, the exterior was designed in the high neoclassical style incorporating elements of the Greek temples at Selinunte
Selinunte
Selinunte is an ancient Greek archaeological site on the south coast of Sicily, southern Italy, between the valleys of the rivers Belice and Modione in the province of Trapani. The archaeological site contains five temples centered on an acropolis...
and Agrigento
Agrigento
Agrigento , is a city on the southern coast of Sicily, Italy, and capital of the province of Agrigento. It is renowned as the site of the ancient Greek city of Akragas , one of the leading cities of Magna Graecia during the golden...
. Realized in the late-Renaissance style, the auditorium was planned for 3,000 people, but, in its current format, it seats 1,350, with 7 tiers of boxes rising up around an inclined stage, and shaped in the typical horseshoe style.

In 1974, the house was closed to complete renovations required by updated safety regulations, but cost over-runs, corruption, and political in-fighting all added to the delay and it remained closed for twenty-three years, finally re-opening on 12 May 1997, four days before its centenary. The opera season started again in 1999, although Verdi
Giuseppe Verdi
Giuseppe Fortunino Francesco Verdi was an Italian Romantic composer, mainly of opera. He was one of the most influential composers of the 19th century...
's Aida
Aida
Aida sometimes spelled Aïda, is an opera in four acts by Giuseppe Verdi to an Italian libretto by Antonio Ghislanzoni, based on a scenario written by French Egyptologist Auguste Mariette...
was performed in 1998 while work in progress continued.

During the restoration regular opera seasons were performed in Teatro Politeama Garibaldi, a minor building not far from Teatro Massimo. In summer a few performances, usually concerts, ballet and operetta, are held in Teatro della Verdura.

In recent years, "charges of corruption and political meddling…along with budget deficits and heavy debts" have plagued the house, but, under its part-English music director, Jan Latham Koenig
Jan Latham Koenig
Jan Latham-Koenig is a conductor. He was born in England and educated at the Royal College of Music in London. He attended Highgate School from 1966 before he founded the Koenig Ensemble in 1976 and began his career as a concert conductor with the BBC, in 1981...
, it is reported that it is once again on track.

The final scenes of the film Godfather Part III were filmed there.