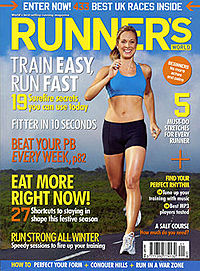 Rodale, Inc., is an American publisher of health and wellness magazines, books, and digital properties. Rodale is headquartered in Emmaus, Pennsylvania
Emmaus, Pennsylvania
Emmaus is a borough in Lehigh County, Pennsylvania, in the United States. It is located five miles southwest of Allentown, Pennsylvania, in the Lehigh Valley region of the state.The population of Emmaus was 11,313 at the 2000 census...
and also maintains a satellite office in New York City
New York City
New York is the most populous city in the United States and the center of the New York Metropolitan Area, one of the most populous metropolitan areas in the world. New York exerts a significant impact upon global commerce, finance, media, art, fashion, research, technology, education, and...
, on Third Avenue.

J. I. Rodale founded Rodale, Inc., in 1930. He was a partner with his brother Joseph in Rodale Manufacturing, manufacturer of electrical switches. Joseph moved Rodale Manufacturing to Emmaus, Pennsylvania to take advantage of favorable local taxes, while J. I. dabbled in publishing. In 1942, Rodale started Organic Farming and Gardening magazine. It taught people how to grow better food without using chemicals in the soil. Today, Organic Gardening is the most highly read gardening magazine in the world. In 1950, Rodale introduced Prevention
Prevention (magazine)
Prevention is an American healthy lifestyle magazine, started in 1950, and published by Rodale Press in Emmaus, Pennsylvania, in the United States. The range of subjects includes food, nutrition, workouts, beauty, and cooking. It was founded by J. I. Rodale...
, a health magazine.

In 1971, J. I. Rodale died during a taping of The Dick Cavett Show
The Dick Cavett Show
The Dick Cavett Show has been the title of several talk shows hosted by Dick Cavett on various television networks, including:* ABC daytime ...
, and his son, Robert D. Rodale (1930–1990), took over the company’s leadership. On September 20, 1990, Robert Rodale was killed in a car accident during a business trip in Russia
Russia
Russia or , officially known as both Russia and the Russian Federation , is a country in northern Eurasia. It is a federal semi-presidential republic, comprising 83 federal subjects...
. Today, a park in Upper Macungie Township, Pennsylvania, is named in his honor.

Following Robert Rodale's death, his wife, Ardath Harter Rodale (1928–2009), became chairman and chief executive officer of the company. In 2000, Steven Pleshette Murphy joined the company as president and chief operating officer, and was named president and CEO in 2002. On June 18, 2007, Ardath Rodale stepped down as chairman, and her daughter, Maria, was named chairman. Ardath remained a member of the company’s board, and took over the new title of Chief Inspiration Officer. On September 1, 2009, Murphy stepped down as President and CEO. Maria Rodale
Maria Rodale
Maria Rodale is the CEO and Chairman of Rodale, Inc., the world's largest independent publisher of health, wellness, and environmental content and the largest independent book publisher in the United States. She is the third generation of the Rodale family to lead the company, which was founded...
, granddaughter of company founder J.I. Rodale and daughter of its previous chairpersons Robert Rodale and Ardath Rodale, succeeded him as CEO.

The site was officially launched on Earth Day
Earth Day
Earth Day is a day that is intended to inspire awareness and appreciation for the Earth's natural environment. The name and concept of Earth Day was allegedly pioneered by John McConnell in 1969 at a UNESCO Conference in San Francisco. The first Proclamation of Earth Day was by San Francisco, the...
, April 22, 2009 with the tagline “where health meets green”. Rodale.com provides news and information to help readers improve their health while making a positive impact on the environment. The site includes daily news articles, videos, and in-depth topic pages. Rodale.com Editor-in-Chief and Rodale Chairman Maria Rodale authors the blog entitled Maria’s Farm Country Kitchen.


Rodale and The Biggest Loser

In 2005, Rodale partnered with Reveille, the producer of the NBC television show, The Biggest Loser. The partnership has produced:

From 2005–2008, Rodale Custom Publishing earned nearly 90 content/design/strategy awards on behalf of its clients.