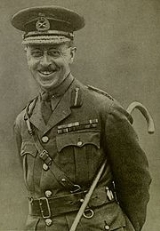 Turner was born in Quebec City
Quebec City
Quebec , also Québec, Quebec City or Québec City is the capital of the Canadian province of Quebec and is located within the Capitale-Nationale region. It is the second most populous city in Quebec after Montreal, which is about to the southwest...
, the son of Richard Turner
Richard Turner (politician)
Richard Turner was a Canadian merchant and legislative councilor.Born in Quebec City, Quebec, the son of James Turner and Susans Frisell, Turner opened a wholesale grocery with a partner called Whitehead & Turner in 1870...
, and worked at his father's grocery and lumber business before turning to the military.

Promoted to brigadier-general
Brigadier
Brigadier is a senior military rank, the meaning of which is somewhat different in different military services. The brigadier rank is generally superior to the rank of colonel, and subordinate to major general....
just after the outbreak of war on 29 September 1914, Turner was given command of the 3rd Brigade in the 1st Division of the Canadian Expeditionary Force
Canadian Expeditionary Force
The Canadian Expeditionary Force was the designation of the field force created by Canada for service overseas in the First World War. Units of the C.E.F. were divided into field formation in France, where they were organized first into separate divisions and later joined together into a single...
. His Brigade Major was Colonel Garnet Hughes
Garnet Hughes
Major General Garnet Burk Hughes CB, DSO, was a Canadian military officer during the First World War. He was the son of Sir Sam Hughes, a Canadian politician and Minister of the Militia during the war...
, son of Sam Hughes
Sam Hughes
For other people of the same name see Sam Hughes Sir Samuel Hughes, KCB, PC was the Canadian Minister of Militia and Defence during World War I...
, the bombastic Minister of Militia and Defence in Robert Borden
Robert Borden
Sir Robert Laird Borden, PC, GCMG, KC was a Canadian lawyer and politician. He served as the eighth Prime Minister of Canada from October 10, 1911 to July 10, 1920, and was the third Nova Scotian to hold this office...
's government.

The 1st Division spent the winter of 1914-15 training in England, and were sent to France in February 1915. After a period of indoctrination about the realities of trench warfare, they took control of a section of trench in the Ypres Salient
Ypres Salient
The Ypres Salient is the area around Ypres in Belgium which was the scene of some of the biggest battles in World War I.In military terms, a salient is a battlefield feature that projects into enemy territory. Therefore, the salient is surrounded by the enemy on three sides, making the troops...
on 17 April 1915. Only five days later, the Germans used poison gas for the first time on the Western Front
Western Front (World War I)
Following the outbreak of World War I in 1914, the German Army opened the Western Front by first invading Luxembourg and Belgium, then gaining military control of important industrial regions in France. The tide of the advance was dramatically turned with the Battle of the Marne...
, sending clouds of chlorine wafting over the Allied trenches. French colonial troops on the Canadians' left flank broke, leaving an enormous hole in the Allied line.

In the chaos that followed, both Turner and Hughes sent erroneous messages back to Lieutenant General Edwin Alderson
Edwin Alderson
Lieutenant General Sir Edwin Alfred Hervey Alderson KCB was a senior British Army officer who served in several campaigns of the late nineteenth and early twentieth centuries...
at divisional headquarters that their line had been broken and was in full retreat, when in fact the 3rd Brigade had not even been attacked yet. Turner was also responsible for sending two reserve battalions forward in a night-time attack on Kitcheners Wood, although he left the details to his subordinate Hughes. Much of the subsequent high casualty rate during the attack can be attributed to Hughes and his insistence on an immediate attack before proper reconnaissance could reveal the presence of enfilading machine gun nests. Although Turner demonstrated great personal bravery when his brigade headquarters came under direct small arms fire and suffered several near misses from artillery, he seemed unable to adequately cope with this new type of mechanized warfare nor with the demands of brigade-sized tactics.

He was replaced as brigade commander by R. G. E. Leckie on 12 August 1915. His subsequent promotion to divisional command was opposed by his superior Edwin Alderson, who considered him to be incompetent. However the well-connected Turner had the support of Sam Hughes and other Canadian politicians, and Alderson was over-ruled. Alderson bitterly wrote, "I am sorry to say that I do not consider Turner really fit to command a Division and his name was not put forward by Sir John French
John French, 1st Earl of Ypres
Field Marshal John Denton Pinkstone French, 1st Earl of Ypres, KP, GCB, OM, GCVO, KCMG, ADC, PC , known as The Viscount French between 1916 and 1922, was a British and Anglo-Irish officer...
, but Canadian politics have been too strong for all of us and so he has got it." Turner was subsequently appointed a Companion of the Order of the Bath (CB) in the King's Birthday Honours of June 1915, and promoted to major-general in September 1915, and given command of the 2nd Division when it arrived in France. However, the division suffered heavy losses during the battle of St. Eloi in September 1916 when Turner lost communication with his division and did not form a clear picture of where they were on the confused battlefield. In addition, due to a miscommunication, his men were decimated by their own artillery, suffering 1,600 casualties. Turner was subsequently relieved of field command on 5 December 1916 and shunted into administrative duties, becoming commander of Canadian forces operating in Britain and the Canadian government's chief military adviser.

He was appointed a Knight Commander of the Order of St Michael and St George (KCMG) in the King's Birthday Honours of June 1917, and promoted to lieutenant-general on 9 June 1917. On 18 May 1918, he became the Chief of the General Staff, Overseas Military Forces of Canada. In addition, he was awarded the Croix de Guerre
Croix de guerre
The Croix de guerre is a military decoration of France. It was first created in 1915 and consists of a square-cross medal on two crossed swords, hanging from a ribbon with various degree pins. The decoration was awarded during World War I, again in World War II, and in other conflicts...
avec Palme and the Legion d'Honneur
Légion d'honneur
The Legion of Honour, or in full the National Order of the Legion of Honour is a French order established by Napoleon Bonaparte, First Consul of the Consulat which succeeded to the First Republic, on 19 May 1802...
from the French government, and the Russian Order of the White Eagle
Order of the White Eagle
The Order of the White Eagle is Poland's highest decoration awarded to both civilians and the military for their merits. It was officially instituted on November 1, 1705 by Augustus II the Strong and bestowed on eight of his supporters: four Polish magnates, three Russian field marshals , and one...
with Swords.

His Victoria Cross is currently stored as part of the RCD Archives and Collection at CFB Petawawa
CFB Petawawa
Canadian Forces Base Petawawa, commonly referred to as CFB Petawawa, or simply "Pet", is a Canadian Forces Base located in Petawawa, Ontario. It is operated as an army base by Canadian Forces Land Force Command.-Base facts:...
, Ontario
Ontario
Ontario is a province of Canada, located in east-central Canada. It is Canada's most populous province and second largest in total area. It is home to the nation's most populous city, Toronto, and the nation's capital, Ottawa....
.