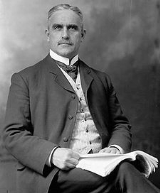 Encyclopedia
For other people of the same name see Sam Hughes (disambiguation)
Sir Samuel Hughes, KCB
Order of the Bath
The Most Honourable Order of the Bath is a British order of chivalry founded by George I on 18 May 1725. The name derives from the elaborate mediæval ceremony for creating a knight, which involved bathing as one of its elements. The knights so created were known as Knights of the Bath...
, PC
Queen's Privy Council for Canada
The Queen's Privy Council for Canada ), sometimes called Her Majesty's Privy Council for Canada or simply the Privy Council, is the full group of personal consultants to the monarch of Canada on state and constitutional affairs, though responsible government requires the sovereign or her viceroy,...
(January 8, 1853 – August 23, 1921) was the Canadian
Canada
Canada is a North American country consisting of ten provinces and three territories. Located in the northern part of the continent, it extends from the Atlantic Ocean in the east to the Pacific Ocean in the west, and northward into the Arctic Ocean...
Minister of Militia and Defence during World War I
World War I
World War I , which was predominantly called the World War or the Great War from its occurrence until 1939, and the First World War or World War I thereafter, was a major war centred in Europe that began on 28 July 1914 and lasted until 11 November 1918...
. He was notable for being the last Liberal-Conservative cabinet minister, until he was dismissed from his cabinet post.

Hughes was born January 8, 1853, at Solina near Bowmanville
Bowmanville, Ontario
Bowmanville is the largest community in the Municipality of Clarington in Durham Region, Ontario, Canada. It is located in Southern Ontario about 75 km east of Toronto and 15 km east of Oshawa along Highway 2...
in what was then Canada West. He was educated in Durham County
Durham County, Ontario
Durham County is a historic county in the Canadian province of Ontario. It was named from the English County and city.Durham County was created in 1792. It was composed of the townships of Cartwright, Manvers, Cavan, Darlington, Clarke and Hope, and portions of what is now Peterborough County,...
and later attended the Toronto Normal School and the University of Toronto
University of Toronto
The University of Toronto is a public research university in Toronto, Ontario, Canada, situated on the grounds that surround Queen's Park. It was founded by royal charter in 1827 as King's College, the first institution of higher learning in Upper Canada...
. In 1866 he joined the 45th West Durham Battalion of Infantry and fought against the Fenian raids
Fenian raids
Between 1866 and 1871, the Fenian raids of the Fenian Brotherhood who were based in the United States; on British army forts, customs posts and other targets in Canada, were fought to bring pressure on Britain to withdraw from Ireland. They divided many Catholic Irish-Canadians, many of whom were...
in the 1860s and 1870s. He was a teacher from 1875 to 1885, when he moved his family to Lindsay
Lindsay, Ontario
Lindsay is a community of 19,361 people on the Scugog River in the Kawartha Lakes region of south-eastern Ontario, Canada. It is approximately west of Peterborough...
, where he had bought The Victoria Warder, the local newspaper. He was the paper's publisher from 1885 to 1897.

He was elected to Parliament
Parliament of Canada
The Parliament of Canada is the federal legislative branch of Canada, seated at Parliament Hill in the national capital, Ottawa. Formally, the body consists of the Canadian monarch—represented by her governor general—the Senate, and the House of Commons, each element having its own officers and...
in 1892, and fought in the Second Boer War
Second Boer War
The Second Boer War was fought from 11 October 1899 until 31 May 1902 between the British Empire and the Afrikaans-speaking Dutch settlers of two independent Boer republics, the South African Republic and the Orange Free State...
in 1899 after helping to convince Sir Wilfrid Laurier to send Canadian troops. Hughes would continually campaign, unsuccessfully, to be awarded a Victoria Cross
Victoria Cross
The Victoria Cross is the highest military decoration awarded for valour "in the face of the enemy" to members of the armed forces of various Commonwealth countries, and previous British Empire territories....
for actions that he had supposedly taken in the fighting. Hughes published most of his own accounts of the war. Hughes often said that when he left, the British commander was "sobbing like a child." In fact, Hughes was dismissed from Boer War service in the summer of 1900 for military indiscipline, and sent back to Canada. Letters in which Hughes charged the British military with incompetence had been published in Canada and South Africa. Hughes had also flagrantly disobeyed orders in a key operation by granting favourable terms to an enemy force which surrendered to him. Although Hughes had proved a competent, and sometimes exceptional, front-line officer, boastfulness and impatience told strongly against him.

Hughes was appointed Minister of Militia after the election of Robert Laird Borden in 1911, with the aim of creating a distinct Canadian army within the British Empire
British Empire
The British Empire comprised the dominions, colonies, protectorates, mandates and other territories ruled or administered by the United Kingdom. It originated with the overseas colonies and trading posts established by England in the late 16th and early 17th centuries. At its height, it was the...
, to be used in case of war. He wrote a letter to the Governor General
Governor General of Canada
The Governor General of Canada is the federal viceregal representative of the Canadian monarch, Queen Elizabeth II...
, Prince Arthur
Prince Arthur, Duke of Connaught and Strathearn
Prince Arthur, Duke of Connaught and Strathearn was a member of the shared British and Saxe-Coburg and Gotha royal family who served as the Governor General of Canada, the 10th since Canadian Confederation.Born the seventh child and third son of Queen Victoria and Prince Albert of Saxe-Coburg and...
, Duke of Connaught, about his longtime demand for the Victoria Cross. Connaught privately recommended that Borden get rid of him.

He encouraged recruitment of volunteers
Volunteering
Volunteering is generally considered an altruistic activity, intended to promote good or improve human quality of life, but people also volunteer for their own skill development, to meet others, to make contacts for possible employment, to have fun, and a variety of other reasons that could be...
when the First World War broke out in 1914, and he constructed a training camp in Valcartier, Quebec
Quebec
Quebec or is a province in east-central Canada. It is the only Canadian province with a predominantly French-speaking population and the only one whose sole official language is French at the provincial level....
. Hughes ordered its construction on August 7th 1914 and demanded it to be finished by the time the entire force was assembled. With the aid of four hundred workmen, Hughes saw the completion of Camp Valcartier .

Unfortunately the camp was poorly organized. With approximately thirty-three thousand recruits, training became a chaotic process. There was little time to train the volunteers, so the training system was rushed. Another problem was that the camp's population was constantly growing, which made planning a difficult task. Hughes was infamous for belligerently giving orders to troops and their officers. Volunteer morale was challenged by inadequate tents, shortages of greatcoats and confusion regarding equipment and storage . However, Hughes received praise for the speed of his actions by Prime Minister Robert Borden
Robert Borden
Sir Robert Laird Borden, PC, GCMG, KC was a Canadian lawyer and politician. He served as the eighth Prime Minister of Canada from October 10, 1911 to July 10, 1920, and was the third Nova Scotian to hold this office...
and members of the cabinet. By October 1914, the troops were mobilized and ready to leave for England .

Hughes was an Orangeman
Orange Institution
The Orange Institution is a Protestant fraternal organisation based mainly in Northern Ireland and Scotland, though it has lodges throughout the Commonwealth and United States. The Institution was founded in 1796 near the village of Loughgall in County Armagh, Ireland...
prone to anti-Catholic sentiments, who was not well liked among French Canadians. Hughes increased tensions by sending Anglocentrics to recruit French Canadians, and by forcing French volunteers to speak English in training.

Canadian staff officers possessed an extremely limited level of experience and competence at the start of the war, having been discouraged from passing through the British Staff College
Staff College, Camberley
Staff College, Camberley, Surrey, was a staff college for the British Army from 1802 to 1997, with periods of closure during major wars. In 1997 it was merged into the new Joint Services Command and Staff College.-Origins:...
for many years prior. Compounding the issue was Sir Samuel Hughes' regular attempts to promote and appoint officers based upon patronage and Canadian nativism instead of ability, an act which not only created tension and jealousy between units but ultimately negatively affected the operating performance of the Canadian Expeditionary Force
Canadian Expeditionary Force
The Canadian Expeditionary Force was the designation of the field force created by Canada for service overseas in the First World War. Units of the C.E.F. were divided into field formation in France, where they were organized first into separate divisions and later joined together into a single...
as well. Byng
Julian Byng, 1st Viscount Byng of Vimy
Field Marshal Julian Hedworth George Byng, 1st Viscount Byng of Vimy was a British Army officer who served as Governor General of Canada, the 12th since Canadian Confederation....
eventually became so incensed with the continuous interference on the part of Hughes that he threatened to resign. Criticism from Field Marshal
Field Marshal
Field Marshal is a military rank. Traditionally, it is the highest military rank in an army.-Etymology:The origin of the rank of field marshal dates to the early Middle Ages, originally meaning the keeper of the king's horses , from the time of the early Frankish kings.-Usage and hierarchical...
Douglas Haig
Douglas Haig
Douglas Haig, 1st Earl Haig was a British soldier and senior commander during World War I.Douglas Haig may also refer to:* Club Atlético Douglas Haig, a football club from Argentina* Douglas Haig , American actor...
, King George V
George V of the United Kingdom
George V was King of the United Kingdom and the British Dominions, and Emperor of India, from 6 May 1910 through the First World War until his death in 1936....
and from within his own party gradually forced Canadian Prime Minister Sir Robert Laird Borden to tighten control over Hughes. However, it was not until Hughes' political isolation, with the creation of the Ministry of the Overseas Military Forces of Canada overseen by Albert Edward Kemp
Albert Edward Kemp
Sir Albert Edward Kemp, KCMG, PC was a Canadian businessman and politician. Kemp was a Canadian Minister of Militia and Defence and Minister of the Overseas Military Forces during World War I. A Conservative and Unionist, Kemp was elected five times to the Canadian House of Commons as the Member...
and subsequent forced resignation in November 1916, that the CEF was able to concentrate on the task of the spring offensive without persistent staffing interference.

Hughes was knight
Knight
A knight was a member of a class of lower nobility in the High Middle Ages.By the Late Middle Ages, the rank had become associated with the ideals of chivalry, a code of conduct for the perfect courtly Christian warrior....
ed as a Knight Commander of the Order of the Bath
Order of the Bath
The Most Honourable Order of the Bath is a British order of chivalry founded by George I on 18 May 1725. The name derives from the elaborate mediæval ceremony for creating a knight, which involved bathing as one of its elements. The knights so created were known as Knights of the Bath...
, on August 24, 1915.