Encyclopedia
The Distinguished Service Order (DSO) is a military decoration
Military decoration
A military decoration is a decoration given to military personnel or units for heroism in battle or distinguished service. They are designed to be worn on military uniform....
of the United Kingdom
United Kingdom
The United Kingdom of Great Britain and Northern IrelandIn the United Kingdom and Dependencies, other languages have been officially recognised as legitimate autochthonous languages under the European Charter for Regional or Minority Languages...
, and formerly of other parts of the British Commonwealth and Empire
British Empire
The British Empire comprised the dominions, colonies, protectorates, mandates and other territories ruled or administered by the United Kingdom. It originated with the overseas colonies and trading posts established by England in the late 16th and early 17th centuries. At its height, it was the...
, awarded for meritorious or distinguished service by officers of the armed forces
Armed forces
The armed forces of a country are its government-sponsored defense, fighting forces, and organizations. They exist to further the foreign and domestic policies of their governing body, and to defend that body and the nation it represents from external aggressors. In some countries paramilitary...
during wartime, typically in actual combat.

Instituted on 6 September 1886 by Queen Victoria in a Royal Warrant
Royal Warrant
Royal warrants of appointment have been issued for centuries to those who supply goods or services to a royal court or certain royal personages. The warrant enables the supplier to advertise the fact that they supply to the royal family, so lending prestige to the supplier...
published in the London Gazette
London Gazette
The London Gazette is one of the official journals of record of the British government, and the most important among such official journals in the United Kingdom, in which certain statutory notices are required to be published...
on 9 November, the first DSOs awarded were dated 25 November 1886. It is typically awarded to officers ranked Major
Major
Major is a rank of commissioned officer, with corresponding ranks existing in almost every military in the world.When used unhyphenated, in conjunction with no other indicator of rank, the term refers to the rank just senior to that of an Army captain and just below the rank of lieutenant colonel. ...
(or its equivalent) or higher, but the honour has sometimes been awarded to especially valorous junior officer
Junior officer
The term junior officer is sometimes used to make clear that an officer in a military or paramilitary unit is not in overall command. The term senior officer is reserved for the officer in overall command....
s. 8,981 DSOs were awarded during the First World War
World War I
World War I , which was predominantly called the World War or the Great War from its occurrence until 1939, and the First World War or World War I thereafter, was a major war centred in Europe that began on 28 July 1914 and lasted until 11 November 1918...
, each award being announced in the London Gazette.

The order was established for rewarding individual instances of meritorious or distinguished service in war. It was a military order, until recently for officers only, and normally given for service under fire or under conditions equivalent to service in actual combat with the enemy, although it was awarded between 1914 and 1916 under circumstances which could not be regarded as under fire (often to staff officers, which caused resentment among front-line officers). After 1 January 1917, commanders in the field were instructed to recommend this award only for those serving under fire. Prior to 1943, the order could be given only to someone Mentioned in Despatches. The order is generally given to officers in command, above the rank of Captain. A number of more junior officers were awarded the DSO, and this was often regarded as an acknowledgement that the officer had only just missed out on the award of the Victoria Cross
Victoria Cross
The Victoria Cross is the highest military decoration awarded for valour "in the face of the enemy" to members of the armed forces of various Commonwealth countries, and previous British Empire territories....
.
In 1942, the award of the DSO was extended to officers of the Merchant Navy
Merchant Navy
The Merchant Navy is the maritime register of the United Kingdom, and describes the seagoing commercial interests of UK-registered ships and their crews. Merchant Navy vessels fly the Red Ensign and are regulated by the Maritime and Coastguard Agency...
who had performed acts of gallantry while under enemy attack. 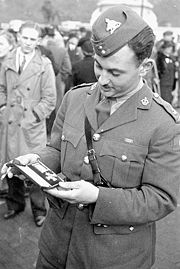 The following received the DSO and three bars: