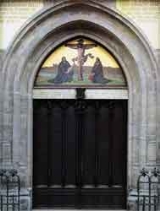 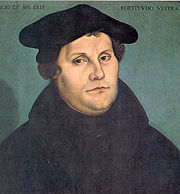 Reformation Day is a religious holiday celebrated on October 31 in remembrance of the Reformation
Protestant Reformation
The Protestant Reformation was a 16th-century split within Western Christianity initiated by Martin Luther, John Calvin and other early Protestants. The efforts of the self-described "reformers", who objected to the doctrines, rituals and ecclesiastical structure of the Roman Catholic Church, led...
, particularly by Lutheran and some Reformed church
Reformed churches
The Reformed churches are a group of Protestant denominations characterized by Calvinist doctrines. They are descended from the Swiss Reformation inaugurated by Huldrych Zwingli but developed more coherently by Martin Bucer, Heinrich Bullinger and especially John Calvin...
communities. It is a civic holiday
Civic holiday
A civic holiday, civil holiday, public holiday, legal holiday, or work holiday is a day that is legally recognized and celebrated as a holiday in a particular sovereign state or jurisdictional subdivision of such, e.g., a state or a province...
in Slovenia
Slovenia
Slovenia , officially the Republic of Slovenia , is a country in Central and Southeastern Europe touching the Alps and bordering the Mediterranean. Slovenia borders Italy to the west, Croatia to the south and east, Hungary to the northeast, and Austria to the north, and also has a small portion of...
(since the Reformation contributed to its cultural development profoundly, although Slovenes are mainly Roman Catholics
Roman Catholic Church
The Catholic Church, also known as the Roman Catholic Church, is the world's largest Christian church, with over a billion members. Led by the Pope, it defines its mission as spreading the gospel of Jesus Christ, administering the sacraments and exercising charity...
) and in the German states
States of Germany
Germany is made up of sixteen which are partly sovereign constituent states of the Federal Republic of Germany. Land literally translates as "country", and constitutionally speaking, they are constituent countries...
of Brandenburg
Brandenburg
Brandenburg is one of the sixteen federal-states of Germany. It lies in the east of the country and is one of the new federal states that were re-created in 1990 upon the reunification of the former West Germany and East Germany. The capital is Potsdam...
, Mecklenburg-Vorpommern, Saxony, Saxony-Anhalt
Saxony-Anhalt
Saxony-Anhalt is a landlocked state of Germany. Its capital is Magdeburg and it is surrounded by the German states of Lower Saxony, Brandenburg, Saxony, and Thuringia.Saxony-Anhalt covers an area of...
, and Thuringia
Thuringia
The Free State of Thuringia is a state of Germany, located in the central part of the country.It has an area of and 2.29 million inhabitants, making it the sixth smallest by area and the fifth smallest by population of Germany's sixteen states....
. It is also a national holiday in Chile
Chile
Chile ,officially the Republic of Chile , is a country in South America occupying a long, narrow coastal strip between the Andes mountains to the east and the Pacific Ocean to the west. It borders Peru to the north, Bolivia to the northeast, Argentina to the east, and the Drake Passage in the far...
since 2008.

In the United States churches often transfer the holiday, so that it falls on the Sunday (called Reformation Sunday) on or before October 31, with All Saints' Day moved to the Sunday on or after November 1. 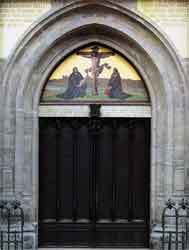 In 1516–17, Johann Tetzel
Johann Tetzel
Johann Tetzel was a German Dominican preacher known for selling indulgences.-Life:Tetzel was born in Pirna, Saxony, and studied theology and philosophy at the university of his native city...
, a Dominican friar and papal commissioner for indulgences, was sent to Germany by the Roman Catholic Church to raise money to rebuild St Peter's Basilica in Rome. Roman Catholic theology stated that faith alone, without charity or good works, is necessarily not true and salvific faith;

On 31 October 1517, Martin Luther
Martin Luther
Martin Luther was a German priest, professor of theology and iconic figure of the Protestant Reformation. He strongly disputed the claim that freedom from God's punishment for sin could be purchased with money. He confronted indulgence salesman Johann Tetzel with his Ninety-Five Theses in 1517...
wrote to Albrecht, Archbishop of Mainz and Magdeburg, protesting against the sale of indulgences. He enclosed in his letter a copy of his "Disputation of Martin Luther on the Power and Efficacy of Indulgences," which came to be known as The 95 Theses. Hans Hillerbrand writes that Luther had no intention of confronting the church, but saw his disputation as a scholarly objection to church practices, and the tone of the writing is accordingly "searching, rather than doctrinaire." Hillerbrand writes that there is nevertheless an undercurrent of challenge in several of the theses, particularly in Thesis 86, which asks: "Why does the pope, whose wealth today is greater than the wealth of the richest Crassus, build the basilica of St. Peter with the money of poor believers rather than with his own money?"

Luther objected to a saying attributed to Johann Tetzel that "As soon as the coin in the coffer rings, the soul from purgatory [also attested as 'into heaven'] springs." He insisted that, since forgiveness was God's alone to grant, those who claimed that indulgences absolved buyers from all punishments and granted them salvation were in error. Christians, he said, must not slacken in following Christ on account of such false assurances. 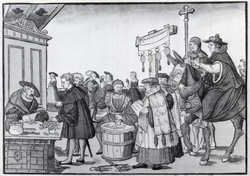 According to Philipp Melanchthon
Philipp Melanchthon
Philipp Melanchthon , born Philipp Schwartzerdt, was a German reformer, collaborator with Martin Luther, the first systematic theologian of the Protestant Reformation, intellectual leader of the Lutheran Reformation, and an influential designer of educational systems...
, writing in 1546, Luther "wrote theses on indulgences and posted them on the church of All Saints on 31 October 1517", an event now seen as sparking the Protestant Reformation
Protestant Reformation
The Protestant Reformation was a 16th-century split within Western Christianity initiated by Martin Luther, John Calvin and other early Protestants. The efforts of the self-described "reformers", who objected to the doctrines, rituals and ecclesiastical structure of the Roman Catholic Church, led...
. Some scholars have questioned Melanchthon's account, since he did not move to Wittenberg until a year later and no contemporaneous evidence exists for Luther's posting of the theses. Others counter that such evidence is unnecessary because it was the custom at Wittenberg university to advertise a disputation
Disputation
In the scholastic system of education of the Middle Ages, disputations offered a formalized method of debate designed to uncover and establish truths in theology and in sciences...
by posting theses on the door of All Saints' Church
All Saints' Church, Wittenberg
All Saints' Church, commonly referred to as Schlosskirche, meaning "Castle Church" — to distinguish it from the "town church", the Stadtkirche of St. Mary — and sometimes known as the Reformation Memorial Church, is a Lutheran church in Lutherstadt Wittenberg, Germany...
, also known as "Castle Church".

The 95 Theses
95 Theses
The Ninety-Five Theses on the Power and Efficacy of Indulgences , commonly known as , was written by Martin Luther, 1517 and is widely regarded as the primary catalyst for the Protestant Reformation...
were quickly translated from Latin into German, printed, and widely copied, making the controversy one of the first in history to be aided by the printing press
Printing press
A printing press is a device for applying pressure to an inked surface resting upon a print medium , thereby transferring the ink...
. Within two weeks, copies of the theses had spread throughout Germany; within two months throughout Europe.


History of the observance of Reformation Day

The parish order
Church Order (Lutheran)
The Church Order or Church Ordinance means the general ecclesiastical constitution of a State.The early Evangelical Church attached less importance to ecclesiastical ritual than the pre-Reformation Church had done...
for the New Church in Regensburg states that the Reformation of the city is to be observed the first Sunday after October 15, every year. This document may be from 1567, however the dating is uncertain. The 1569 church order in Pomerania
Pomerania
Pomerania is a historical region on the south shore of the Baltic Sea. Divided between Germany and Poland, it stretches roughly from the Recknitz River near Stralsund in the West, via the Oder River delta near Szczecin, to the mouth of the Vistula River near Gdańsk in the East...
states that the Reformation was to be observed on St. Martin's Day
St. Martin's Day
St. Martin's Day, also known as the Feast of St. Martin, Martinstag or Martinmas, the Feast of St Martin of Tours or Martin le Miséricordieux, is a time for feasting celebrations. This is the time when autumn wheat seeding is completed. Historically, hiring fairs were held where farm laborers...
, which falls on November 11. The hundredth anniversary of the Reformation, celebrated throughout the Protestant areas of Germany, was observed from October 31 to November 1, 1617, but a standard annual observance began much later, sometime after the two hundredth anniversary commemoration in 1717.

The liturgical color of the day is red, which represents the Holy Spirit and the Martyrs of the Christian Church. Luther's hymn, A Mighty Fortress is our God
A Mighty Fortress is Our God
"A Mighty Fortress Is Our God" is the best known of Martin Luther's hymns. Luther wrote the words and composed the melody sometime between 1527 and 1529. It has been translated into English at least seventy times and also into many other languages...
is traditionally sung on this day. It is also traditional in some Lutheran schools for schoolchildren to hold Reformation Day plays or pageants that re-enact scenes from the life of Martin Luther. The fact that Reformation Day coincides with Halloween
Halloween
Hallowe'en , also known as Halloween or All Hallows' Eve, is a yearly holiday observed around the world on October 31, the night before All Saints' Day...
may not be mere coincidence. Halloween, being the Eve of All Saints' Day might have been an entirely appropriate day for Luther to post his 95 Theses against indulgences since the castle church would be open on All Saints' Day specifically for people to view a large collection of relics. The viewing of these relics was said to promise a reduction in time in purgatory similar to that of the purchase of an indulgence.
The source of this article is wikipedia, the free encyclopedia.  The text of this article is licensed under the GFDL.