The red-eye effect in photography
Photography
Photography is the art, science and practice of creating durable images by recording light or other electromagnetic radiation, either electronically by means of an image sensor or chemically by means of a light-sensitive material such as photographic film...
is the common appearance of red
Red
Red is any of a number of similar colors evoked by light consisting predominantly of the longest wavelengths of light discernible by the human eye, in the wavelength range of roughly 630–740 nm. Longer wavelengths than this are called infrared , and cannot be seen by the naked eye...
pupil
Pupil
The pupil is a hole located in the center of the iris of the eye that allows light to enter the retina. It appears black because most of the light entering the pupil is absorbed by the tissues inside the eye. In humans the pupil is round, but other species, such as some cats, have slit pupils. In...
s in color photograph
Photograph
A photograph is an image created by light falling on a light-sensitive surface, usually photographic film or an electronic imager such as a CCD or a CMOS chip. Most photographs are created using a camera, which uses a lens to focus the scene's visible wavelengths of light into a reproduction of...
s of eye
Eye
Eyes are organs that detect light and convert it into electro-chemical impulses in neurons. The simplest photoreceptors in conscious vision connect light to movement...
s. It occurs when using a photographic flash
Flash (photography)
A flash is a device used in photography producing a flash of artificial light at a color temperature of about 5500 K to help illuminate a scene. A major purpose of a flash is to illuminate a dark scene. Other uses are capturing quickly moving objects or changing the quality of light...
very close to the camera lens (as with most compact cameras
Point and shoot camera
A point-and-shoot camera, also called a compact camera, is a still camera designed primarily for simple operation. Most use focus free lenses or autofocus for focusing, automatic systems for setting the exposure options, and have flash units built in....
), in ambient low light. The effect appears in the eyes of humans and animals that have no tapetum lucidum
Tapetum lucidum
The tapetum lucidum is a layer of tissue in the eye of many vertebrate animals....
, hence no eyeshine
Tapetum lucidum
The tapetum lucidum is a layer of tissue in the eye of many vertebrate animals....
, and rarely in animals that have a tapetum lucidum. The red-eye effect can also be seen when one human observes another when there is a bright lightsource nearby.

Theatrical followspot operators, positioned nearly coincidentally with a very bright light and somewhat distant from the actors, occasionally witness red-eye in actors on stage. The effect is not visible to the rest of the audience because it is reliant on the very small angle between the followspot operator and the light.

The feature film Blade Runner
Blade Runner
Blade Runner is a 1982 American science fiction film directed by Ridley Scott and starring Harrison Ford, Rutger Hauer, and Sean Young. The screenplay, written by Hampton Fancher and David Peoples, is loosely based on the novel Do Androids Dream of Electric Sheep? by Philip K...
intentionally induced a red-eye effect to indicate that certain characters were "replicants" (according to the story, an artificial life-form). The effect relied on a semi-silvered mirror directing light at the actors on the same incidence as the camera. 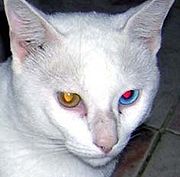 The role of melanin in red-eye effect is nicely demonstrated in animals with heterochromia
Heterochromia
In anatomy, heterochromia refers to a difference in coloration, usually of the iris but also of hair or skin. Heterochromia is a result of the relative excess or lack of melanin...
: only the blue eye displays the effect. The effect is still more pronounced in humans and animals with albinism
Albinism
Albinism is a congenital disorder characterized by the complete or partial absence of pigment in the skin, hair and eyes due to absence or defect of an enzyme involved in the production of melanin...
. All forms of albinism involve abnormal production and/or deposition of melanin.

Red-eye effect is seen in photographs of children also because children's eyes have more rapid dark adaption
Adaptation (eye)
In ocular physiology, adaptation is the ability of the eye to adjust to various levels of darkness and light.-Efficacy:The human eye can function from very dark to very bright levels of light; its sensing capabilities reach across nine orders of magnitude. This means that the brightest and the...
: in low light a child's pupils enlarge sooner, and an enlarged pupil accentuates the red-eye effect.

In a photograph of a child's face, red-eye in one eye but not the other may be a sign of the cancer retinoblastoma
Retinoblastoma
Retinoblastoma is a rapidly developing cancer that develops in the cells of retina, the light-detecting tissue of the eye. In the developed world, Rb has one of the best cure rates of all childhood cancers , with more than nine out of every ten sufferers surviving into...
.

Similar effects, some related to red-eye effect, are of several kinds:


Photography techniques for prevention and removal

The red-eye effect can be prevented in a number of ways.

If direct flash must be used, a good rule of thumb is to separate the flash from the lens by 1/20 of the distance of the camera to the subject. For example, if the subject is 2 metres (6 feet) away, the flash head should be at least 10 cm (4 inches) away from the lens.

Professional photographers prefer to use ambient light or indirect flash as the red-eye reduction system does not always prevent red eyes, for example if people look away during the pre-flash. In addition, people do not look natural with small pupils, and direct lighting from close to the camera lens is considered to produce unflattering photographs.

Various graphics editing software packages have functions to remove red eyes from digital photographs. Some have automated this process, and can apply it to many photos at once. Red-eye removal is also built into many popular consumer programs, such as Adobe Photoshop, Apple iPhoto
IPhoto
iPhoto is a digital photograph manipulation software application developed by Apple Inc. and released with every Macintosh personal computer as part of the iLife suite of digital life management applications...
, Corel Photo-Paint
Corel PHOTO-PAINT
Corel PHOTO-PAINT is a raster graphics editor developed and marketed by Corel since 1992. Corel currently markets the software for Windows operating systems, previously having marketed versions for Linux and Mac OS...
, GIMP
GIMP
GIMP is a free software raster graphics editor. It is primarily employed as an image retouching and editing tool and is freely available in versions tailored for most popular operating systems including Microsoft Windows, Apple Mac OS X, and Linux.In addition to detailed image retouching and...
, Google Picasa
Picasa
Picasa is an image organizer and image viewer for organizing and editing digital photos, plus an integrated photo-sharing website, originally created by Idealab in 2002 and owned by Google since 2004. "Picasa" is a blend of the name of Spanish painter Pablo Picasso, the phrase mi casa for "my...
, and Microsoft Windows Live Photo Gallery
Windows Live Photo Gallery
Windows Live Photo Gallery is a photo management and photo sharing application released as a part of Microsoft's Windows Live initiative. It is an upgraded version of Windows Photo Gallery, which is a part of Windows Vista....
.
The source of this article is wikipedia, the free encyclopedia.  The text of this article is licensed under the GFDL.