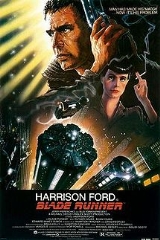 Overview
Blade Runner is a 1982 American science fiction film
Science fiction film
Science fiction film is a film genre that uses science fiction: speculative, science-based depictions of phenomena that are not necessarily accepted by mainstream science, such as extraterrestrial life forms, alien worlds, extrasensory perception, and time travel, often along with futuristic...
directed by Ridley Scott
Ridley Scott
Sir Ridley Scott is an English film director and producer. His most famous films include The Duellists , Alien , Blade Runner , Legend , Thelma & Louise , G. I...
and starring Harrison Ford
Harrison Ford
Harrison Ford is an American film actor and producer. He is famous for his performances as Han Solo in the original Star Wars trilogy and as the title character of the Indiana Jones film series. Ford is also known for his roles as Rick Deckard in Blade Runner, John Book in Witness and Jack Ryan in...
, Rutger Hauer, and Sean Young
Sean Young
Sean Young is an American actress, best known for her performance in films from the 1980s such as Blade Runner, Dune, and No Way Out.-Early life:...
. The screenplay, written by Hampton Fancher
Hampton Fancher
Hampton Fancher is a former actor who became a producer and screenwriter in the late 1970s. Fancher was born to a Mexican mother and an American father in East Los Angeles, California, US. At 15, he ran away to Spain to become a flamenco dancer and renamed himself Mario Montejo. He was married...
and David Peoples
David Peoples
David Webb Peoples is an American screenwriter.-Life and career:Peoples was born in Middletown, Connecticut, the son of Ruth and Joe Webb Peoples, a geologist. He studied English at the University of California, Berkeley...
, is loosely based on the novel Do Androids Dream of Electric Sheep?
Do Androids Dream of Electric Sheep?
Do Androids Dream of Electric Sheep? is a science fiction novel by American writer Philip K. Dick first published in 1968. The main plot follows Rick Deckard, a bounty hunter of androids, while the secondary plot follows John Isidore, a man of sub-normal intelligence who befriends some of the...
by Philip K. Dick
Philip K. Dick
Philip Kindred Dick was an American novelist, short story writer and essayist whose published work is almost entirely in the science fiction genre. Dick explored sociological, political and metaphysical themes in novels dominated by monopolistic corporations, authoritarian governments and altered...
.

The film depicts a dystopia
Dystopia
A dystopia is the idea of a society in a repressive and controlled state, often under the guise of being utopian, as characterized in books like Brave New World and Nineteen Eighty-Four...
n Los Angeles in November 2019 in which genetically engineered organic robots called replicant
Replicant
A replicant is a bioengineered or biorobotic being created in the film Blade Runner . The Nexus series—genetically designed by the Tyrell Corporation—are virtually identical to an adult human, but have superior strength, agility, and variable intelligence depending on the model...
s—visually indistinguishable from adult humans—are manufactured by the powerful Tyrell Corporation as well as by other "mega–manufacturers" around the world.

I was quit when I came in here. I'm twice as quit now.

Replicants are like any other machine. They're either a benefit or a hazard. If they're a benefit, it's not my problem.

I don't get it, Tyrell. How can it not know what it is?

Memories, you're talking about memories.

[Revealing to Rachael that she is a replicant] You ever tell anyone that? Your mother, Tyrell? They're implants. Those aren't your memories, they're somebody else's. They're Tyrell's niece's. OK, bad joke, I'm sorry... No, really, I made a bad joke. Go home, you're not a Replicant... (sigh) you wanna drink? I'll get you a drink.

I've had people walk out on me before, but not when I was being so charming.

"They don't advertise for killers in the newspaper. That was my profession. Ex-cop. Ex-blade runner. Ex-killer."