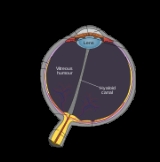 What is the difference between a praying mantis eye and the human eye?
More
x