Encyclopedia
Retinoblastoma is a rapidly developing cancer
Cancer
Cancer , known medically as a malignant neoplasm, is a large group of different diseases, all involving unregulated cell growth. In cancer, cells divide and grow uncontrollably, forming malignant tumors, and invade nearby parts of the body. The cancer may also spread to more distant parts of the...
that develops in the cells of retina
Retina
The vertebrate retina is a light-sensitive tissue lining the inner surface of the eye. The optics of the eye create an image of the visual world on the retina, which serves much the same function as the film in a camera. Light striking the retina initiates a cascade of chemical and electrical...
, the light-detecting tissue
Tissue (biology)
Tissue is a cellular organizational level intermediate between cells and a complete organism. A tissue is an ensemble of cells, not necessarily identical, but from the same origin, that together carry out a specific function. These are called tissues because of their identical functioning...
of the eye. In the developed world, Rb has one of the best cure rates of all childhood cancers (95-98%), with more than nine out of every ten sufferers surviving into adulthood.

The most common and obvious sign
Medical sign
A medical sign is an objective indication of some medical fact or characteristic that may be detected by a physician during a physical examination of a patient....
of retinoblastoma is an abnormal appearance of the pupil, leukocoria
Leukocoria
Leukocoria is an abnormal white reflection from the retina of the eye. Leukocoria resembles eyeshine, but leukocoria can occur in humans and other animals that lack eyeshine because their retina lacks a tapetum lucidum....
, also known as amaurotic cat's eye reflex. Other less common and less specific signs and symptoms are: deterioration of vision, a red and irritated eye, faltering growth or delayed development. Some children with retinoblastoma can develop a squint, commonly referred to as "cross-eyed" or "wall-eyed" (strabismus
Strabismus
Strabismus is a condition in which the eyes are not properly aligned with each other. It typically involves a lack of coordination between the extraocular muscles, which prevents bringing the gaze of each eye to the same point in space and preventing proper binocular vision, which may adversely...
). Retinoblastoma presents with advanced disease in developing countries and eye enlargement is a common finding.

Depending on the position of the tumors, they may be visible during a simple eye exam using an ophthalmoscope to look through the pupil. A positive diagnosis is usually made only with an examination under anesthetic (EUA). A white eye reflection is not always a positive indication of retinoblastoma and can be caused by light being reflected badly or by other conditions such as Coats's Disease
Coats disease
Coats’ disease, , is a very rare congenital, nonhereditary eye disorder, causing full or partial blindness, characterized by abnormal development of blood vessels behind the retina.It can have a similar presentation to that of retinoblastoma.-Presentation:Coats’ usually...
.

In a photograph, the photographic fault red eye
Red eye
Red eye or red-eye or redeye may refer to:-In humans and animals:*Red eye , is a symptom of eye disease.*Red-eye effect, the appearance of red eyes in photos due to the use of a flash*Red eye, an extremely rare eye color...
may be a sign of retinoblastoma, if in the photograph it is in one eye and not in the other eye. A more clear sign is "white eye" or "cat's eye".

Retinoblastoma is rare and affects approximately 1 in 15,000 live births, but it is the most common inherited childhood malignancy. In the UK, around 40 to 50 new cases are diagnosed each year.

Most children are diagnosed before the age of five years old. In the UK, bilateral cases usually present within the first year with the average age at diagnosis being 9 months. Diagnosis of unilateral cases peaks between 24 and 30 months.

In children with the heritable genetic form of retinoblastoma there is a mutation on chromosome 13
Chromosome 13 (human)
Chromosome 13 is one of the 23 pairs of chromosomes in humans. People normally have two copies of this chromosome. Chromosome 13 spans about 114 million base pairs and represents between 3.5 and 4 % of the total DNA in cells....
, called the RB1 gene.The genetic codes found in chromosomes control the way in which cells grow and develop within the body. If a portion of the code is missing or altered (mutation) a cancer may develop.

The defective RB1 gene can be inherited from either parent; in some children, however, the mutation occurs in the early stages of fetal development. It is unknown what causes the gene abnormality; it is most likely to be a random mistake during the copy process which occurs when a cell divides.

Several methods have been developed to detect the RB1 gene mutations. Attempts to correlate gene mutations to the stage at presentation have not shown convincing evidence of a correlation.
Current research being joint funded by The Childhood Eye Cancer Trust in Birmingham, UK, is attempting to establish the different types of retinoblastoma children may have and subsequently determine a more successful treatment pathway.

Screening for retinoblastoma should be part of a "well baby" screening for newborns during the first three months of life, to include:

The red reflex
Red reflex
The red reflex refers to the reddish-orange reflection from the eye's retina that is observed when using an ophthalmoscope or retinoscope from approximately 30 cm / 1 foot...
: checking for a normal reddish-orange reflection from the eye's retina with an ophthalmoscope or retinoscope from approximately 30 cm / 1 foot, usually done in a dimly lit or dark room.
The corneal light reflex/Hirchberg test: checking for symmetrical reflection of beam of light in the same spot on each eye when a light is shined into each cornea, to help determine whether the eyes are crossed.
Eye examination
Eye examination
An eye examination is a battery of tests performed by an ophthalmologist, optometrist, or orthoptist assessing vision and ability to focus on and discern objects, as well as other tests and examinations pertaining to the eyes....
: checking for any structural abnormalities.

If the eye examination is abnormal, further testing may include imaging studies, such as Computerized Tomography (CT), Magnetic Resonance Imaging
Magnetic resonance imaging
Magnetic resonance imaging , nuclear magnetic resonance imaging , or magnetic resonance tomography is a medical imaging technique used in radiology to visualize detailed internal structures...
(MRI), and Ultrasound
Ultrasound
Ultrasound is cyclic sound pressure with a frequency greater than the upper limit of human hearing. Ultrasound is thus not separated from "normal" sound based on differences in physical properties, only the fact that humans cannot hear it. Although this limit varies from person to person, it is...
. CT and MRI can help define the structure abnormalities and reveal any calcium depositions. Ultrasound can help define the height and thickness of the tumor. Bone marrow
Bone marrow
Bone marrow is the flexible tissue found in the interior of bones. In humans, bone marrow in large bones produces new blood cells. On average, bone marrow constitutes 4% of the total body mass of humans; in adults weighing 65 kg , bone marrow accounts for approximately 2.6 kg...
examination or lumbar puncture
Lumbar puncture
A lumbar puncture is a diagnostic and at times therapeutic procedure that is performed in order to collect a sample of cerebrospinal fluid for biochemical, microbiological, and cytological analysis, or very rarely as a treatment to relieve increased intracranial pressure.-Indications:The...
may also be done to determine any metastases
Metastasis
Metastasis, or metastatic disease , is the spread of a disease from one organ or part to another non-adjacent organ or part. It was previously thought that only malignant tumor cells and infections have the capacity to metastasize; however, this is being reconsidered due to new research...
to bones or the brain.

Identifying the RB1 gene mutation that led to a child's retinoblastoma can be important in the clinical care of the affected individual and in the care of (future) siblings and offspring. 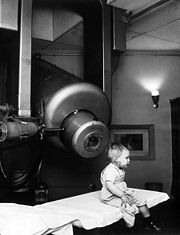 Treatment of retinoblastoma varies from country to country. The first priority is to preserve the life of the child, then to preserve the vision and thirdly to minimize any complications or side effects of the treatment. The exact course of treatment will depend on the individual case and will be decided by the ophthalmologist in discussion with the paediatric oncologist.

Many treatment options exist, including chemotherapy
Chemotherapy
Chemotherapy is the treatment of cancer with an antineoplastic drug or with a combination of such drugs into a standardized treatment regimen....
(administered locally via a thin catheter threaded through the groin, through the aorta and the neck, into the optic vessels), cryotherapy
Cryotherapy
Cryotherapy is the local or general use of low temperatures in medical therapy or the removal of heat from a body part. The term "cryotherapy" comes from the Greek cryo meaning cold and the word therapy meaning cure...
, radioactive plaques, laser therapy, external beam radiotherapy
External beam radiotherapy
External beam radiotherapy or teletherapy is the most common form of radiotherapy. The patient sits or lies on a couch and an external source of radiation is pointed at a particular part of the body...
and surgical removal of the eyeball. Any combinations of these treatments may be adopted.

In recent years, there has been an effort to find alternatives to enucleation and radiation therapy.