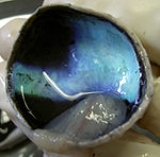 The structure of the choroid is generally divided into four layers:

There are two circulations of the eye: the retinal and uveal, supplied in humans by posterior ciliary arteries
Ciliary arteries
The ciliary arteries are divisible into three groups, the long posterior, short posterior, and the anterior.* The short posterior ciliary arteries from six to twelve in number, arise from the ophthalmic as it crosses the optic nerve....
, originating from the ophthalmic artery
Ophthalmic artery
The ophthalmic artery is the first branch of the internal carotid artery distal to the cavernous sinus. Branches of the OA supply all the structures in the orbit as well as some structures in the nose, face and meninges...
. The arteries of the uveal circulation, supplying the uvea and outer and middle layers of the retina, are branches of the ophthalmic artery and enter the eyeball without passing with the optic nerve. The retinal circulation, on the other hand, derives its circulation from the central retinal artery, also a branch of the ophthalmic artery, but passing in conjunction with the optic nerve. They are branching in a segmental distribution to the end arterioles and not anastomoses. This is clinically significant for diseases affecting choroidal blood supply. The macula
Macula
The macula or macula lutea is an oval-shaped highly pigmented yellow spot near the center of the retina of the human eye. It has a diameter of around 5 mm and is often histologically defined as having two or more layers of ganglion cells...
responsible for central vision and the anterior part of the optic nerve
Optic nerve
The optic nerve, also called cranial nerve 2, transmits visual information from the retina to the brain. Derived from the embryonic retinal ganglion cell, a diverticulum located in the diencephalon, the optic nerve doesn't regenerate after transection.-Anatomy:The optic nerve is the second of...
are dependent on choroidal blood supply.

Teleosts bear a body of capillary adjacent to the optic nerve called the choroidal gland. Though its function is not known, it is believed to be a supplemental oxygen carrier.

Melanin
Melanin
Melanin is a pigment that is ubiquitous in nature, being found in most organisms . In animals melanin pigments are derivatives of the amino acid tyrosine. The most common form of biological melanin is eumelanin, a brown-black polymer of dihydroxyindole carboxylic acids, and their reduced forms...
, a darkly colored pigment
Pigment
A pigment is a material that changes the color of reflected or transmitted light as the result of wavelength-selective absorption. This physical process differs from fluorescence, phosphorescence, and other forms of luminescence, in which a material emits light.Many materials selectively absorb...
, helps the choroid limit uncontrolled reflection within the eye that would potentially result in the perception of confusing images. In humans and most other primates, melanin occurs throughout the choroid. In albino humans, frequently melanin is absent and vision is low
Low vision
Low vision is a subspecialty within the professions of optometry and ophthalmology dealing with individuals who have reduced vision even when using the best possible spectacle or contact lens correction available. It can be a result of either congenital disease Low vision is a subspecialty within...
. In many animals, however, the partial absence of melanin contributes to superior night vision
Night vision
Night vision is the ability to see in low light conditions. Whether by biological or technological means, night vision is made possible by a combination of two approaches: sufficient spectral range, and sufficient intensity range...
. In these animals, melanin is absent from a section of the choroid and within that section a layer of highly reflective tissue, the tapetum lucidum
Tapetum lucidum
The tapetum lucidum is a layer of tissue in the eye of many vertebrate animals....
, helps to collect light by reflecting it in a controlled manner. The uncontrolled reflection of light from dark choroid produces the photographic red-eye effect
Red-eye effect
The red-eye effect in photography is the common appearance of red pupils in color photographs of eyes. It occurs when using a photographic flash very close to the camera lens , in ambient low light. The effect appears in the eyes of humans and animals that have no tapetum lucidum, hence no...
on photos, whereas the controlled reflection of light from the tapetum lucidum produces eyeshine (see Tapetum lucidum
Tapetum lucidum
The tapetum lucidum is a layer of tissue in the eye of many vertebrate animals....
).
The source of this article is wikipedia, the free encyclopedia.  The text of this article is licensed under the GFDL.