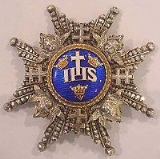 The three above mentioned Orders together with the Order of Vasa
Order of Vasa
The Royal Order of Vasa was a Swedish Royal order of chivalry, awarded to citizens of Sweden for service to state and society especially in the fields of agriculture, mining and commerce. It was instituted on 29 May 1772 by King Gustav III of Sweden...
form the Orders of His Majesty the King (Swedish
Swedish language
Swedish is a North Germanic language, spoken by approximately 10 million people, predominantly in Sweden and parts of Finland, especially along its coast and on the Åland islands. It is largely mutually intelligible with Norwegian and Danish...
Kungl. Maj:ts Orden), a term also used for the chancellery of the Orders in the Royal Palace
Stockholm Palace
The Stockholm Palace is the official residence and major royal palace of the Swedish monarch. . Stockholm Palace is located on Stadsholmen , in Gamla Stan in the capital, Stockholm...
. A Swedish Knight (Member/of the Cloth) of the Order of the Seraphim is not referred to as a Knight (Member/of the Cloth) of the Seraphim, but rather as a Knight and Commander of the Orders of His Majesty the King . This form is used because the Swedish word orden is an old plural form which indicates that a knight has to be a Commander Grand Cross or 1st Class of at least one of the other Swedish Orders. Foreign Knights are for the greater part Knights of the Order of the Seraphim. A Knight of the Order may be styled "Herr" + surname, which used to be the formal style for Swedish secular Knights (untitled high-ranking noblemen) appointed by the Swedish King, a practice that ceased in the 17th Century. Until 1975 the sons of the Swedish monarch were borne knights of the Order. At present the sons and daughters of the Swedish monarch do not become knights and members of the Order until they are eighteen years of age.

When a knight of the Order dies, his coat of arms
Coat of arms
A coat of arms is a unique heraldic design on a shield or escutcheon or on a surcoat or tabard used to cover and protect armour and to identify the wearer. Thus the term is often stated as "coat-armour", because it was anciently displayed on the front of a coat of cloth...
is hung in the former royal burial church Riddarholmskyrkan
Riddarholmskyrkan
The Riddarholmen Church is the burial church of the Swedish monarchs. It is located on the island of Riddarholmen, close to the Royal Palace in Stockholm, Sweden. The congregation was dissolved in 1807 and today the church is used only for burial and commemorative purposes. Swedish monarchs from...
in Stockholm
Stockholm
Stockholm is the capital and the largest city of Sweden and constitutes the most populated urban area in Scandinavia. Stockholm is the most populous city in Sweden, with a population of 851,155 in the municipality , 1.37 million in the urban area , and around 2.1 million in the metropolitan area...
, and when the funeral takes place the church bells are rung constantly from 12:00 to 13:00.

When originally instituted the knights of the Order were required to supervise the major hospitals and mental asylums in Sweden, and in particular, the Seraphim Hospital, which was a major hospital in Stockholm
Stockholm
Stockholm is the capital and the largest city of Sweden and constitutes the most populated urban area in Scandinavia. Stockholm is the most populous city in Sweden, with a population of 851,155 in the municipality , 1.37 million in the urban area , and around 2.1 million in the metropolitan area...
until it was closed in 1980. This requirement evidentually died out as boards of physicians and other professionals made such supervision by the Knights of the Seraphim anachronistic during the course of the 19th century.

The first set of statutes described the Order as "revived", but this is unsubstantiated. No Swedish sources account for an ancient Order of the Seraphim.

The medieval custom of new crowned monarchs dubbing knights at their coronations as a way of specially honoring particular noblemen was apparently accompanied in Sweden with the gift of a chain apparently specially designed for the occasion. These chains did not indicate the initiation into an order of chivalry as this is usually understood, since the bestowal of a chain of a particular design only occurred at a particular coronation and was not repeated at any other coronations or royal event. The description of some of these chains from the some of pre-Vasa coronations states that they consisted of alternating link of seraphim heads and patriarchal crosses, thus perhaps creating the later impression that there had been an earlier order of the Seraphim of which the 1748 order was seen as a revival. It seems reasonable to assume, at very least, that the accounts of these earlier knightly collars influenced the choice of design for the collar of the 1748 order.

This medieval custom survived into the period of the Vasa dynasty as well, for Eric XIV is known to have bestowed an Order of the Lamb of God at his coronation in 1561. Similarly, John III had bestowed the Order of the Name of Jesus in 1569. It is noteworthy that a contemporary representation of this order shows a collar of alternating red-enameled seraphim heads and gold patriarchal crosses from which hangs a as pendant an oval badge enameled blue and bearing the Greek letters of the Christogram
Christogram
A Christogram is a monogram or combination of letters that forms an abbreviation for the name of Jesus Christ, traditionally used as a Christian symbol. Different types of Christograms are associated with the various traditions of Christianity, e.g...
IHS (the initials of the name of Jesus in Greek) with a cross above and the three nails of the Passion below between the three crowns of the Swedish royal arms—the same as the central medallion of the latter Order of the Seraphim. King Charles IX of Sweden bestowed the Royal Order of Jehova or Jehova Order
Jehova Order
King Charles IX of Sweden instituted the Royal Order of Jehova in 1606. The collar of this order of knighthood was worn by the king alone. There is a report that three Swedish princes wore a collar at the coronation of Charles IX in the 15th...
at his coronation in 1606—perhaps as Calvinist alternative or reaction to the Catholic devotion to the Name of Jesus implied in his brother’s coronation order. Charles X Gustav’s Order of the Saviour took the form of a similar circular medallion bearing the letters IHS in diamonds surrounded by a border of diamonds in the center of a cross formed of four enameled Vasa sheaves and hanging from a pink ribbon worn around the neck, of which one example survives in the collections of the Royal Armory.

Knights and Members of the Order wear the badge on a collar (chain) or on a sash from the right shoulder, and the star on the left chest:


Vestments of the order

Formerly Knight the Order also had two distinctive habits, worn on special and formal ocassions such as coronations, chapters, etc. They were called the Large Habit and the Small Habit.