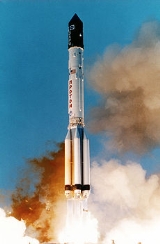 The baseline Proton-K is a three-stage rocket. Thirty have been launched in this configuration, with payloads including all of the Soviet Union's Salyut space stations, all Mir
Mir
Mir was a space station operated in low Earth orbit from 1986 to 2001, at first by the Soviet Union and then by Russia. Assembled in orbit from 1986 to 1996, Mir was the first modular space station and had a greater mass than that of any previous spacecraft, holding the record for the...
modules with the exception of the Docking Module
Mir Docking Module
The Stykovochnyy Otsek , GRAU index 316GK, otherwise known as the Mir docking module or SO, was the sixth module of the Russian space station Mir, launched in November 1995 aboard the...
, which was launched on the US
United States
The United States of America is a federal constitutional republic comprising fifty states and a federal district...
Space Shuttle
Space Shuttle
The Space Shuttle was a manned orbital rocket and spacecraft system operated by NASA on 135 missions from 1981 to 2011. The system combined rocket launch, orbital spacecraft, and re-entry spaceplane with modular add-ons...
, and the Zarya
Zarya
Zarya , also known as the Functional Cargo Block or FGB , was the first module of the International Space Station to be launched. The FGB provided electrical power, storage, propulsion, and guidance to the ISS during the initial stage of assembly...
and Zvezda modules of the International Space Station
International Space Station
The International Space Station is a habitable, artificial satellite in low Earth orbit. The ISS follows the Salyut, Almaz, Cosmos, Skylab, and Mir space stations, as the 11th space station launched, not including the Genesis I and II prototypes...
. It was intended to launch the manned TKS spacecraft
TKS spacecraft
TKS spacecraft was a Soviet spacecraft design in the late 1960s intended to supply the military Almaz space station. The spacecraft was designed for manned or autonomous cargo resupply use...
, prior to the cancellation of that programme.

It is fuelled by Unsymmetrical dimethylhydrazine and nitrogen tetroxide. These are hypergolic fuels which burn on contact, avoiding the need for an ignition system, and can be stored at ambient temperatures. This avoids the need for low-temperature–tolerant components, and allows the rocket to sit on the pad fully fuelled for long periods of time. In contrast, cryogenic fuel
Cryogenic fuel
Cryogenic fuels are fuels that require storage at extremely low temperatures in order to maintain them in a liquid state. Cryogenic fuels most often constitute liquefied gases such as liquid hydrogen....
s need periodic topping-up of propellants as they boil off. The fuels used on the Proton, are, however, corrosive
Corrosive
A corrosive substance is one that will destroy or irreversibly damage another surface or substance with which it comes into contact. The main hazards to people include damage to the eyes, the skin, and the tissue under the skin; inhalation or ingestion of a corrosive substance can damage the...
and toxic and requiring special handling. The Russian Government pays for the cleanup of residual propellent in spent stages that impact downrange.

Proton components were built in facilities near Moscow, then transported by rail to the final assembly point near the pad. The first stage of the Proton-K consists of a central oxidiser tank, and six outrigger fuel tanks. This separates as one piece from the second stage, which is attached by means of a lattice structure interstage. The second stage ignites prior to first stage separation, and the top of the first stage is insulated to ensure that it retains its structural integrity until separation.

The first stage uses six RD-253 engines, designed by Valentin Glushko
Valentin Glushko
Valentin Petrovich Glushko or Valentyn Petrovych Hlushko was a Soviet engineer, and the principal Soviet designer of rocket engines during the Soviet/American Space Race.-Biography:...
. The RD-253 is a single-chamber engine and uses a staged combustion
Staged combustion
Staged combustion is a method for reducing nitrogen oxides emissions from combustion. There are two methods:* Air staged supply* Fuel staged supply-Air staged supply:Characteristics:* NOX reduction rate from 50-75% is possible....
cycle. The first-stage guidance system is open-loop, which requires significant amounts of propellant to be held in reserve.

The third stage is powered by an RD-0210 engine and four vernier
Vernier thruster
A vernier thruster is a thruster used on a spacecraft for attitude control. It is a smaller thrust motor than main attitude control motors and is used for fine adjustments to the attitude or velocity of a spacecraft...
nozzles, with common systems. The verniers provide steering, eliminating the need for gimbal
Gimbal
A gimbal is a pivoted support that allows the rotation of an object about a single axis. A set of two gimbals, one mounted on the other with pivot axes orthogonal, may be used to allow an object mounted on the innermost gimbal to remain immobile regardless of the motion of its support...
ling of the main engine. They also aid stage separation, and act as ullage motor
Ullage motor
Ullage motors are relatively small, independently-fueled rocket engines that may be fired to accelerate the rocket prior to main engine ignition, when the vehicle is in a zero-g situation....
s. Ducts are built into the structure to channel vernier exhaust before stage separation. The third stage guidance system is also used to control the first and second stages flight.

Many launches have used an upper stage to boost the payload into a higher orbit. Block D
Block D
Blok D is an upper stage used on Soviet and later Russian expendable launch systems, including the N1, Proton-K and Zenit. There were plans to use it for some other rockets as well ....
upper stages were used on forty flights, the majority of which were for the Luna
Luna programme
The Luna programme , occasionally called Lunik or Lunnik, was a series of robotic spacecraft missions sent to the Moon by the Soviet Union between 1959 and 1976. Fifteen were successful, each designed as either an orbiter or lander, and accomplished many firsts in space exploration...
and Zond
Zond program
Zond was the name given to two distinct series of Soviet unmanned space program undertaken from 1964 to 1970. The first series based on 3MV planetary probe was intended to gather information about nearby planets...
programmes. Ten flights used the Block D-1, mostly to launch spacecraft towards Venus
Venus
Venus is the second planet from the Sun, orbiting it every 224.7 Earth days. The planet is named after Venus, the Roman goddess of love and beauty. After the Moon, it is the brightest natural object in the night sky, reaching an apparent magnitude of −4.6, bright enough to cast shadows...
. Block D-2 upper stages were used three times, with the Fobos 1, Fobos 2 and Mars 96
Mars 96
Mars 96 was a failed Mars mission launched in 1996 to investigate Mars by the Russian Space Forces and not directly related to the Soviet Mars probe program of the same name. After failure of the second fourth-stage burn, the probe assembly re-entered the Earth's atmosphere, breaking up over a...
spacecraft. The Block DM upper stage was used on 66 launches. The most commonly used upper stage is the Block DM-2, which has been used on 107 flights, mostly with GLONASS
GLONASS
GLONASS , acronym for Globalnaya navigatsionnaya sputnikovaya sistema or Global Navigation Satellite System, is a radio-based satellite navigation system operated for the Russian government by the Russian Space Forces...
and Raduga satellites. Fifteen launches have used the modernised Block DM-2M stage, mostly carrying Ekspress
Express (satellite)
Ekspress , is a series of geostationary communications satellites owned by Russian State Company for Satellite Communications. The first satellite of this kind was launched on October 13, 1994...
satellites, however other satellites, including Eutelsat
Eutelsat
Eutelsat S.A. is a French-based satellite provider. Providing coverage over the entire European continent, as well as the Middle East, Africa, India and significant parts of Asia and the Americas, it is one of the world's three leading satellite operators in terms of revenues.Eutelsat’s satellites...
's SESAT 1, have also used this configuration. Two Araks satellites were launched using Block DM-5 upper stages. The Block DM1, a commercial version of the DM-2, was used to launch Inmarsat-3 F2. The Block DM2 upper stage was used to launch three groups of seven Iridium
Iridium (satellite)
Iridium Communications Inc. is a company, based in McLean, VA, United States which operates the Iridium satellite constellation, a system of 66 active satellites used for worldwide voice and data communication from hand-held satellite phones and other transceiver units...
satellites, including Iridium 33
Iridium 33
Iridium 33 was a U.S. Iridium communications satellite. It was launched into low Earth orbit from Site 81/23 at the Baikonur Cosmodrome at 01:36 GMT on 14 September 1997, by a Proton-K carrier rocket with a Block DM2 upper stage...
. This configuration was also used to launch Integral for the European Space Agency
European Space Agency
The European Space Agency , established in 1975, is an intergovernmental organisation dedicated to the exploration of space, currently with 18 member states...
. Block DM3 stages were used on twenty five launches, almost exclusively carrying commercial satellites. Telstar 5 was launched with a Block DM4. The Briz-M
Briz-M
The Briz-M , is a Russian orbit insertion upper stage manufactured by Khrunichev State Research and Production Space Center and used on the Proton-M rocket.- Characteristics :...
upper stage was used for four launches; three carrying payloads for the Russian Government, and one commercial launch with GE-9 for GE Americom. One launch was reported to have used a Block DM-3 upper stage, however this may have been a reporting error, and it is unclear whether this launch actually used a DM-3, DM3, or DM-2.
The source of this article is wikipedia, the free encyclopedia.  The text of this article is licensed under the GFDL.