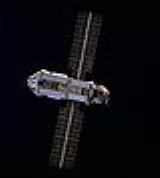 Overview
Zarya also known as the Functional Cargo Block or FGB (from the Russian "", or ФГБ), was the first module of the International Space Station
International Space Station
The International Space Station is a habitable, artificial satellite in low Earth orbit. The ISS follows the Salyut, Almaz, Cosmos, Skylab, and Mir space stations, as the 11th space station launched, not including the Genesis I and II prototypes...
to be launched. The FGB provided electrical power, storage, propulsion, and guidance to the ISS during the initial stage of assembly. With the launch and assembly in orbit of other modules with more specialized functionality, Zarya is now primarily used for storage, both inside the pressurized section and in the externally mounted fuel tanks.

What are its purposes???
More

Zarya also known as the Functional Cargo Block or FGB (from the Russian "", or ФГБ), was the first module of the International Space Station
International Space Station
The International Space Station is a habitable, artificial satellite in low Earth orbit. The ISS follows the Salyut, Almaz, Cosmos, Skylab, and Mir space stations, as the 11th space station launched, not including the Genesis I and II prototypes...
to be launched. The FGB provided electrical power, storage, propulsion, and guidance to the ISS during the initial stage of assembly. With the launch and assembly in orbit of other modules with more specialized functionality, Zarya is now primarily used for storage, both inside the pressurized section and in the externally mounted fuel tanks. The Zarya is a descendant of the TKS spacecraft
TKS spacecraft
TKS spacecraft was a Soviet spacecraft design in the late 1960s intended to supply the military Almaz space station. The spacecraft was designed for manned or autonomous cargo resupply use...
designed for the Russian Salyut
Salyut
The Salyut program was the first space station program undertaken by the Soviet Union, which consisted of a series of nine space stations launched over a period of eleven years from 1971 to 1982...
program. The name Zarya was given to the FGB because it signified the dawn of a new era of international cooperation in space.

The FGB design was originally intended as a module for the Russian Mir
Mir
Mir was a space station operated in low Earth orbit from 1986 to 2001, at first by the Soviet Union and then by Russia. Assembled in orbit from 1986 to 1996, Mir was the first modular space station and had a greater mass than that of any previous spacecraft, holding the record for the...
space station, but was not flown as of the end of the Mir program. A FGB cargo block was incorporated as an upper stage engine into the Polyus spacecraft, flown (unsuccessfully) on the first Energia
Energia
Energia was a Soviet rocket that was designed by NPO Energia to serve as a heavy-lift expendable launch system as well as a booster for the Buran spacecraft. Control system main developer enterprise was the NPO "Electropribor"...
launch. With the end of the Mir program, the design was adapted to use for the International Space Station.

Zarya was paid for by the United States space agency NASA
NASA
The National Aeronautics and Space Administration is the agency of the United States government that is responsible for the nation's civilian space program and for aeronautics and aerospace research...
and was built from December 1994 to January 1998 in Russia
Russia
Russia or , officially known as both Russia and the Russian Federation , is a country in northern Eurasia. It is a federal semi-presidential republic, comprising 83 federal subjects...
at the Khrunichev State Research and Production Space Center
Khrunichev
Khrunichev State Research and Production Space Center is a Moscow-based producer of spacecraft and space-launch systems, including the Proton and Rokot rockets. The company's history dates back to 1916, when an automobile factory was established outside Moscow...
(KhSC) in Moscow. Its control system was developed by the Khartron Corp.
Khartron
JSC "Khartron" is a one of the leading design engineering bureaus of CIS , which develops and produces spacecraft control systems.- History and achievements :Khartron Corp...
(Kharkiv
Kharkiv
Kharkiv or Kharkov is the second-largest city in Ukraine.The city was founded in 1654 and was a major centre of Ukrainian culture in the Russian Empire. Kharkiv became the first city in Ukraine where the Ukrainian Soviet Socialist Republic was proclaimed in December 1917 and Soviet government was...
, Ukraine
Ukraine
Ukraine is a country in Eastern Europe. It has an area of 603,628 km², making it the second largest contiguous country on the European continent, after Russia...
). The module was included as part of NASA's plan for the International Space Station (ISS) instead of Lockheed
Lockheed Martin
Lockheed Martin is an American global aerospace, defense, security, and advanced technology company with worldwide interests. It was formed by the merger of Lockheed Corporation with Martin Marietta in March 1995. It is headquartered in Bethesda, Maryland, in the Washington Metropolitan Area....
's "Bus-1" option because it was significantly cheaper (US$220 million vs. $450 million). As part of the contract Khrunichev constructed much of an identical module (referred to as "FGB-2") for contingency purposes. FGB-2 has been proposed for a variety of projects; it is now slated to be used to construct the Russian Multipurpose Laboratory Module Nauka. 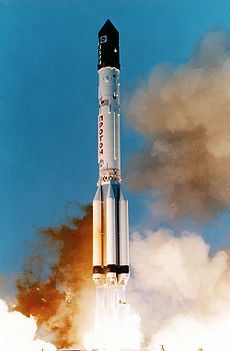 The module has three docking ports, one on each end, and one on the side. The Zvezda Service Module is attached to the aft port, the Pressurized Mating Adapter
Pressurized Mating Adapter
The International Space Station uses three Pressurized Mating Adapters to interconnect spacecraft and modules with different docking mechanisms. The first two PMAs were launched with the Unity module in 1998 aboard STS-88...
PMA-1 attached to the forward port connects to the Unity Module, and the side (axial or nadir) port was used to dock with either of Russian Soyuz or Progress spacecraft until the Rassvet module
Rassvet (ISS module)
Rassvet , also known as the Mini-Research Module 1 and formerly known as the Docking Cargo Module , is a component of the International Space Station . The module's design is similar to the Mir Docking Module launched on STS-74 in 1995. Rassvet is primarily used for cargo storage and as a docking...
was docked there permanently. Zarya has two solar arrays
Photovoltaic module
A solar panel is a packaged, connected assembly of solar cells, also known as photovoltaic cells...
measuring 10.67 by and six nickel-cadmium batteries
Nickel-cadmium battery
The nickel–cadmium battery ' is a type of rechargeable battery using nickel oxide hydroxide and metallic cadmium as electrodes....
that can provide an average of 3 kilowatts of power. These have been retracted so the P1/S1 radiators could deploy. Zarya has 16 external fuel tanks that can hold over 5.4 metric tons of propellant. Zarya also has 24 large steering jets, 12 small steering jets, and two large engines that were used for reboost and major orbital changes; with the docking of Zvezda these are now permanently disabled. Since they are no longer needed for Zarya's engines, Zarya's propellant tanks are now used to store additional fuel for Zvezda.

Zarya was launched on November 20, 1998 on a Russian Proton rocket from Baikonur Cosmodrome Site 81
Baikonur Cosmodrome Site 81
Site 81 at the Baikonur Cosmodrome is a launch site used, along with Site 200, by Proton rockets. It consists of two launch pads, areas 23 and 24. Area 24 is currently used for Proton-K and Proton-M launches, while Area 23 is currently inactive....
in Kazakhstan to a 400 km (248.5 mi) high orbit with a designed lifetime of at least 15 years. After Zarya reached orbit, STS-88
STS-88
-Mission parameters:*Weight*Liftoff: *Landing: *Perigee: *Apogee: *Orbital Period: 92.4min-Launch attempts:-Mission highlights:Node 1, named Unity, was the first space station hardware delivered by the space shuttle. It has two Pressurized Mating Adapters , one attached to either end...
launched on December 4, 1998 to attach the Unity Module.

Although only designed to fly autonomously for six to eight months, Zarya was required to do so for almost two years due to delays to the Russian Service Module, Zvezda. Zvezda was finally launched on July 12, 2000, docking with Zarya on July 26 using the Russian Kurs docking system
Kurs (docking system)
Kurs is a radio telemetry system used by the Soviet and later Russian space program.Kurs was developed by the Research Institute of Precision Instruments before 1985 and manufactured by the Kiev Radio Factory .- History :...
.

Zarya initially had problems with battery charging circuits, but these were resolved. It will eventually require supplemental micro meteor shielding, as it was given an exemption to the ISS rules when it launched.

Zarya passed the 50,000-orbit mark at 15:17 UTC on August 14, 2007 during the STS-118
STS-118
- Crew notes :Astronaut Clayton Anderson originally was slated to be launched to the ISS on this mission, but was moved to STS-117. His replacement was Alvin Drew....
mission to the International Space Station.