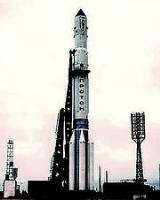 Encyclopedia
Site 200 at the Baikonur Cosmodrome
Baikonur Cosmodrome
The Baikonur Cosmodrome , also called Tyuratam, is the world's first and largest operational space launch facility. It is located in the desert steppe of Kazakhstan, about east of the Aral Sea, north of the Syr Darya river, near Tyuratam railway station, at 90 meters above sea level...
is a launch site used by Proton rockets. It consists of two launch pads, areas 39 and 40. Area 39 is currently used for Proton-M launches, including commercial flights conducted by International Launch Services
International Launch Services
International Launch Services is a U.S.-Russian joint venture with exclusive rights to the worldwide sale of commercial Proton rocket launch services from the Baikonur Cosmodrome in Kazakhstan.- Ownership :...
. Area 40 is currently inactive, as it was slated to be rebuilt as a launch site for the Angara rocket. Although the project was relocated to Site 250, Area 40 was not put back into service.