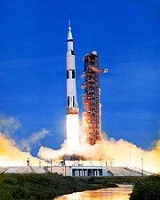 Overview
In spaceflight
Spaceflight
Spaceflight is the act of travelling into or through outer space. Spaceflight can occur with spacecraft which may, or may not, have humans on board. Examples of human spaceflight include the Russian Soyuz program, the U.S. Space shuttle program, as well as the ongoing International Space Station...
, a launch vehicle or carrier rocket is a rocket
Rocket
A rocket is a missile, spacecraft, aircraft or other vehicle which obtains thrust from a rocket engine. In all rockets, the exhaust is formed entirely from propellants carried within the rocket before use. Rocket engines work by action and reaction...
used to carry a payload from the Earth's surface into outer space
Outer space
Outer space is the void that exists between celestial bodies, including the Earth. It is not completely empty, but consists of a hard vacuum containing a low density of particles: predominantly a plasma of hydrogen and helium, as well as electromagnetic radiation, magnetic fields, and neutrinos....
. A launch system includes the launch vehicle, the launch pad
Launch pad
A launch pad is the area and facilities where rockets or spacecraft lift off. A spaceport can contain one or many launch pads. A typical launch pad consists of the service and umbilical structures. The service structure provides an access platform to inspect the launch vehicle prior to launch....
and other infrastructure.
Usually the payload is an artificial satellite
Satellite
In the context of spaceflight, a satellite is an object which has been placed into orbit by human endeavour. Such objects are sometimes called artificial satellites to distinguish them from natural satellites such as the Moon....
placed into orbit
Orbit
In physics, an orbit is the gravitationally curved path of an object around a point in space, for example the orbit of a planet around the center of a star system, such as the Solar System...
, but some spaceflights are sub-orbital
Sub-orbital spaceflight
A sub-orbital space flight is a spaceflight in which the spacecraft reaches space, but its trajectory intersects the atmosphere or surface of the gravitating body from which it was launched, so that it does not complete one orbital revolution....
while others enable spacecraft
Spacecraft
A spacecraft or spaceship is a craft or machine designed for spaceflight. Spacecraft are used for a variety of purposes, including communications, earth observation, meteorology, navigation, planetary exploration and transportation of humans and cargo....
to escape
Escape velocity
In physics, escape velocity is the speed at which the kinetic energy plus the gravitational potential energy of an object is zero gravitational potential energy is negative since gravity is an attractive force and the potential is defined to be zero at infinity...
Earth orbit entirely. A launch vehicle which carries its payload on a suborbital trajectory is often called a sounding rocket
Sounding rocket
A sounding rocket, sometimes called a research rocket, is an instrument-carrying rocket designed to take measurements and perform scientific experiments during its sub-orbital flight. The origin of the term comes from nautical vocabulary, where to sound is to throw a weighted line from a ship into...
.
Expendable launch vehicles are designed for one-time use.

What are the different types of satelite launch vehicle
More
x