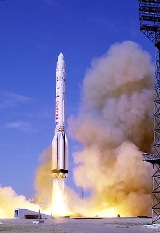 The Zarya
Zarya
Zarya , also known as the Functional Cargo Block or FGB , was the first module of the International Space Station to be launched. The FGB provided electrical power, storage, propulsion, and guidance to the ISS during the initial stage of assembly...
and Zvezda modules of the International Space Station
International Space Station
The International Space Station is a habitable, artificial satellite in low Earth orbit. The ISS follows the Salyut, Almaz, Cosmos, Skylab, and Mir space stations, as the 11th space station launched, not including the Genesis I and II prototypes...
, as well as Salyut 2
Salyut 2
Salyut 2 was a Soviet space station which was launched in 1973 as part of the Salyut programme. It was the first Almaz military space station to fly. Within two weeks of launch the station had lost attitude control and depressurised, leaving it unusable...
, 3
Salyut 3
Salyut 3 was a Soviet space station launched on June 25, 1974. It was the second Almaz military space station, and the first such station to be launched successfully. It was included in the Salyut program to disguise its true military nature...
and 5
Salyut 5
Salyut 5 , also known as OPS-3, was a Soviet space station. Launched in 1976 as part of the Salyut programme, it was the third and last Almaz space station to be launched for the Soviet military. Two Soyuz missions visited the station, each manned by two cosmonauts...
, and the Spektr
Spektr
Spektr was the fifth module of the Mir Space Station. The module was designed for remote observation of Earth's environment containing atmospheric and surface research equipment...
and Priroda
Priroda
The Priroda module was the seventh and final module of the Mir Space Station. Its primary purpose was to conduct Earth resource experiments through remote sensing and to develop and verify remote sensing methods...
modules of Mir
Mir
Mir was a space station operated in low Earth orbit from 1986 to 2001, at first by the Soviet Union and then by Russia. Assembled in orbit from 1986 to 1996, Mir was the first modular space station and had a greater mass than that of any previous spacecraft, holding the record for the...
, were launched from Area 23. Area 24 was used to launch Salyut 1
Salyut 1
Salyut 1 was the first space station of any kind, launched by the USSR on April 19, 1971. It was launched unmanned using a Proton-K rocket. Its first crew came later in Soyuz 10, but was unable to dock completely; its second crew launched in Soyuz 11 and remained on board for 23 days...
, 4
Salyut 4
Salyut 4 was a Salyut space station launched on December 26, 1974 into an orbit with an apogee of 355 km, a perigee of 343 km and an orbital inclination of 51.6 degrees. It was essentially a copy of the DOS 3, and unlike its ill-fated sibling it was a complete success...
and 6
Salyut 6
Salyut 6 , DOS-5, was a Soviet orbital space station, the eighth flown as part of the Salyut programme. Launched on 29 September 1977 by a Proton rocket, the station was the first of the 'second-generation' type of space station. Salyut 6 possessed several revolutionary advances over the earlier...
.
The source of this article is wikipedia, the free encyclopedia.  The text of this article is licensed under the GFDL.