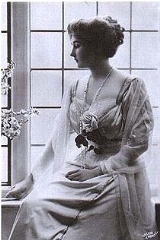 Encyclopedia
Princess Patricia of Connaught (Victoria Patricia Helena Elizabeth; later Lady Patricia Ramsay; 17 March 1886 – 12 January 1974) was a member of the British Royal Family
British Royal Family
The British Royal Family is the group of close relatives of the monarch of the United Kingdom. The term is also commonly applied to the same group of people as the relations of the monarch in her or his role as sovereign of any of the other Commonwealth realms, thus sometimes at variance with...
, a granddaughter of Queen Victoria. She relinquished her title of a British princess
British princess
This is a list of British princesses from the accession of King George I in 1714. This article deals with both princesses of the blood royal and women who become princesses upon marriage....
and the style of Her Royal Highness upon her marriage to the commoner Alexander Ramsay.

She was named Colonel-in-Chief of Princess Patricia's Canadian Light Infantry
Princess Patricia's Canadian Light Infantry
Princess Patricia's Canadian Light Infantry is one of the three regular force infantry regiments of the Canadian Army. The regiment is composed of four battalions including a primary reserve battalion, for a total of 2,000 soldiers...
on 22 February 1918 and held that appointment until her death. The regiment was named after her. Princess Patricia personally designed the badge and colours for the regiment to take overseas to France. As the regiment's Colonel-in-Chief, she played an active role until her death. She was succeeded in 1974 by her cousin and goddaughter Patricia (the Rt. Hon. Lady Brabourne), who became the Countess Mountbatten of Burma
Patricia Knatchbull, 2nd Countess Mountbatten of Burma
Patricia Edwina Victoria Knatchbull, 2nd Countess Mountbatten of Burma, is a British peeress and former lady-in-waiting to her third cousin, Queen Elizabeth II. She was the elder daughter of Louis Mountbatten, 1st Earl Mountbatten of Burma and his wife, the heiress Edwina Ashley, a patrilineal...
, who asked that the men and women of her regiment discount her titles and refer to her in honour of her predecessor as Lady Patricia.

The question of Patricia's marriage was a hot topic of conversation in Edwardian times. She was matched with various foreign royals, including the King of Spain
Alfonso XIII of Spain
Alfonso XIII was King of Spain from 1886 until 1931. His mother, Maria Christina of Austria, was appointed regent during his minority...
and the future King of Portugal
Manuel II of Portugal
Manuel II , named Manuel Maria Filipe Carlos Amélio Luís Miguel Rafael Gabriel Gonzaga Francisco de Assis Eugénio de Bragança Orleães Sabóia e Saxe-Coburgo-Gotha — , was the last King of Portugal from 1908 to 1910, ascending the throne after the assassination of his father and elder brother Manuel...
; the future Grand Duke of Mecklenburg-Strelitz
Adolf Friedrich VI, Grand Duke of Mecklenburg-Strelitz
Adolphus Frederick VI was the last grand duke of Mecklenburg-Strelitz.-Early life:Adolphus Frederick George Ernest Albert Edward of Mecklenburg was born in Neustrelitz the third child and eldest son of the then Hereditary Grand Duke Adolphus Frederick of Mecklenburg-Strelitz and his wife Princess...
and Grand Duke Michael of Russia
Grand Duke Michael Alexandrovich of Russia
Grand Duke Michael Alexandrovich of Russia was the youngest son of Emperor Alexander III of Russia.At the time of his birth, his paternal grandfather was still the reigning Emperor of All the Russias. Michael was fourth-in-line to the throne following his father and elder brothers Nicholas and...
, younger brother of Tsar
Tsar
Tsar is a title used to designate certain European Slavic monarchs or supreme rulers. As a system of government in the Tsardom of Russia and Russian Empire, it is known as Tsarist autocracy, or Tsarism...
Nicholas II
Nicholas II of Russia
Nicholas II was the last Emperor of Russia, Grand Prince of Finland, and titular King of Poland. His official short title was Nicholas II, Emperor and Autocrat of All the Russias and he is known as Saint Nicholas the Passion-Bearer by the Russian Orthodox Church.Nicholas II ruled from 1894 until...
.

In the end, however, Patricia chose a commoner rather than a husband of royal blood. She married naval Commander (later Admiral) The Hon. Alexander Ramsay (29 May 1881 – 8 October 1972), one of her father's aides de camp, and third son of the Earl of Dalhousie. She was married at Westminster Abbey
Westminster Abbey
The Collegiate Church of St Peter at Westminster, popularly known as Westminster Abbey, is a large, mainly Gothic church, in the City of Westminster, London, United Kingdom, located just to the west of the Palace of Westminster. It is the traditional place of coronation and burial site for English,...
on 27 February 1919. On her wedding day, Princess Patricia of Connaught voluntarily relinquished the style of Royal Highness
Royal Highness
Royal Highness is a style ; plural Royal Highnesses...
and the title of Princess of Great Britain and Ireland
British princess
This is a list of British princesses from the accession of King George I in 1714. This article deals with both princesses of the blood royal and women who become princesses upon marriage....
and assumed the style of Lady Patricia Ramsay with precedence immediately before the Marchionesses of England.

Cdr Alexander Ramsay and Lady Patricia Ramsay had one child:

Despite her relinquishment of her royal title, Lady Patricia remained a member of the British Royal Family
British Royal Family
The British Royal Family is the group of close relatives of the monarch of the United Kingdom. The term is also commonly applied to the same group of people as the relations of the monarch in her or his role as sovereign of any of the other Commonwealth realms, thus sometimes at variance with...
, remained in the line of succession, and attended all major royal events including weddings, funerals, and the coronation
Coronation
A coronation is a ceremony marking the formal investiture of a monarch and/or their consort with regal power, usually involving the placement of a crown upon their head and the presentation of other items of regalia...
s of George VI
George VI of the United Kingdom
George VI was King of the United Kingdom and the Dominions of the British Commonwealth from 11 December 1936 until his death...
and Elizabeth II in 1937 and 1953 respectively.

Lady Patricia was an accomplished artist specializing in watercolours, in 1959 she was made an honorary member of the Royal Institute of Painters in Water Colours
Royal Institute of Painters in Water Colours
The Royal Institute of Painters in Water Colours , initially called the New Society of Painters in Water Colours, , is one of the societies in the Federation of British Artists, based in the Mall Galleries in London.-History:In 1831 the society was founded as the New Society of Painters in Water...
. Much of her work was inspired by her travel in tropical countries. Her style was influenced by Gauguin
Paul Gauguin
Eugène Henri Paul Gauguin was a leading French Post-Impressionist artist. He was an important figure in the Symbolist movement as a painter, sculptor, print-maker, ceramist, and writer...
and Van Gogh
Vincent van Gogh
Vincent Willem van Gogh , and used Brabant dialect in his writing; it is therefore likely that he himself pronounced his name with a Brabant accent: , with a voiced V and palatalized G and gh. In France, where much of his work was produced, it is...
, because she had studied under A.S. Hartrick who had known the artists. She died at Ribsden Holt
Ribsden Holt
Ribsden Holt is a former royal residence at Windlesham, Surrey, England.The royal residents were Princess Louise Duchess of Argyll to 1939, and Lady Patricia Ramsay 1939-1974....
, Windlesham
Windlesham
Windlesham is a village in the Surrey Heath district of Surrey in South East England. It is also the name of the parish that covers Bagshot and Lightwater, in addition to Windlesham...
, Surrey
Surrey
Surrey is a county in the South East of England and is one of the Home Counties. The county borders Greater London, Kent, East Sussex, West Sussex, Hampshire and Berkshire. The historic county town is Guildford. Surrey County Council sits at Kingston upon Thames, although this has been part of...
, before her 88th birthday and a year and a half after her husband. At the time of her death, she was the younger of only two surviving female grandchildren of Queen Victoria; the other one being Princess Alice
Princess Alice, Countess of Athlone
Princess Alice, Countess of Athlone was a member of the British Royal Family. She was the longest-lived Princess of the Blood Royal of the British Royal Family and the last surviving grandchild of Queen Victoria...
, who lived to the age of 97.
Lady Patricia Ramsay and Admiral Alexander Ramsay are buried at the Royal Burial Ground, Frogmore, directly behind the Royal Mausoleum of her grandparents Queen Victoria and Prince Albert, in Windsor Great Park.

The whole differenced by a Label of five points Argent, first and fifth with a cross gules, the others fleurs-de-lys azure.