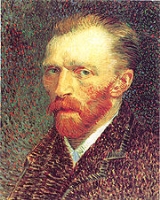 Overview
Vincent Willem van Gogh (icon, us;
vɑn ˈɣɔχ; 30 March 1853 29 July 1890) was a Dutch
Dutch people
The Dutch people are an ethnic group native to the Netherlands. They share a common culture and speak the Dutch language. Dutch people and their descendants are found in migrant communities worldwide, notably in Suriname, Chile, Brazil, Canada, Australia, South Africa, New Zealand, and the United...
post-Impressionist
Post-Impressionism
Post-Impressionism is the term coined by the British artist and art critic Roger Fry in 1910 to describe the development of French art since Manet. Fry used the term when he organized the 1910 exhibition Manet and Post-Impressionism...
painter whose work, notable for its rough beauty, emotional honesty, and bold color, had a far-reaching influence on 20th-century art.

Am austine asare and am new here,and l want to join your highly respected society, but am stock up, with the procedure or steps to join. please can yo...

What painting did he sell

Discuss the subject matter of starry night by van gogh

How did he developed person self imagery in a self to visually convey ideas, thoughts, and feelings
More

Do you think he is a good artist? and why do you tink that?

Which painting did he sell in his lifetime and to whom?

What did Vincent mean when he talked of painting in the metamorphic?
More

The thing has already taken form in my mind before I start it. The first attempts are absolutely unbearable. I say this because I want you to know that if you see something worthwhile in what I am doing, it is not by accident but because of real direction and purpose.

As quoted in The Path of Least Resistance : Principles for Creating What You Want to Create (1984) by Robert Fritz, p. 181

When I have a terrible need of — shall I say the word — religion. Then I go out and paint the stars.

As quoted in An Examined Faith : Social Context and Religious Commitment (1991) by James Luther Adams and George K. Beach, p. 259

I dream my painting, and then I paint my dream.

As quoted in Marry Your Muse: Making a Lasting Commitment to Your Creativity (1997) by Jan Phillips, p. 176

I have often neglected my appearance. I admit it, and I also admit that it is "shocking." But look here, lack of money and poverty have something to do with it too, as well as a profound disillusionment, and besides, it is sometimes a good way of ensuring the solitude you need, of concentrating more or less on whatever study you are immersed in.

Now for the past five years or so, I don't know how long exactly, I have been more or less without permanent employment, wandering from pillar to post. You will say, ever since such and such a time you have been going downhill, you have been feeble, you have done nothing. Is that entirely true?