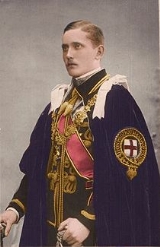 Encyclopedia
Prince Arthur of Connaught and Strathearn (Arthur Frederick Patrick Albert; 13 January 1883 – 12 September 1938) was a member of the British Royal Family
British Royal Family
The British Royal Family is the group of close relatives of the monarch of the United Kingdom. The term is also commonly applied to the same group of people as the relations of the monarch in her or his role as sovereign of any of the other Commonwealth realms, thus sometimes at variance with...
, a grandson of Queen Victoria. Prince Arthur held the title of a British prince
British prince
This is a list of British princes from the accession of George I in 1714. The title of prince is at the will of the sovereign, who can both grant and revoke the title. Individuals holding the title of prince will usually also be styled His Royal Highness or formerly His Highness...
with the style His Royal Highness. He also served as Governor-General of the Union of South Africa
Governor-General of the Union of South Africa
The Governor-General of the Union of South Africa was the representative of the British and later South African Crown in the Union of South Africa between 31 May 1910 and 31 May 1961...
from 20 November 1920 to 21 January 1924. 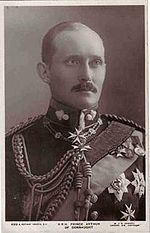 After attending finishing school, Prince Arthur was educated at the Royal Military College Sandhurst and commissioned into the 7th (Queen's Own) Hussars. During the Second Boer War
Second Boer War
The Second Boer War was fought from 11 October 1899 until 31 May 1902 between the British Empire and the Afrikaans-speaking Dutch settlers of two independent Boer republics, the South African Republic and the Orange Free State...
, he saw active duty with the 7th Hussars and spent several months stationed at Krugersdorp. In 1907, he was promoted to the rank of captain in the 2nd Dragoons (Royal Scots Greys). He became the honorary Colonel-in-Chief
Colonel-in-Chief
In the various Commonwealth armies, the Colonel-in-Chief of a regiment is its patron. This position is distinct from that of Colonel of the Regiment. They do not have an operational role. They are however kept informed of all important activities of the regiment, and pay occasional visits to its...
of this regiment in 1920.

During World War I
World War I
World War I , which was predominantly called the World War or the Great War from its occurrence until 1939, and the First World War or World War I thereafter, was a major war centred in Europe that began on 28 July 1914 and lasted until 11 November 1918...
, Prince Arthur served as aide-de-camp
Aide-de-camp
An aide-de-camp is a personal assistant, secretary, or adjutant to a person of high rank, usually a senior military officer or a head of state...
to Generals Sir John French
John French, 1st Earl of Ypres
Field Marshal John Denton Pinkstone French, 1st Earl of Ypres, KP, GCB, OM, GCVO, KCMG, ADC, PC , known as The Viscount French between 1916 and 1922, was a British and Anglo-Irish officer...
and Sir Douglas Haig
Douglas Haig
Douglas Haig, 1st Earl Haig was a British soldier and senior commander during World War I.Douglas Haig may also refer to:* Club Atlético Douglas Haig, a football club from Argentina* Douglas Haig , American actor...
, the successive commanders of the British Expeditionary Force in France
France
The French Republic , The French Republic , The French Republic , (commonly known as France , is a unitary semi-presidential republic in Western Europe with several overseas territories and islands located on other continents and in the Indian, Pacific, and Atlantic oceans. Metropolitan France...
and Belgium
Belgium
Belgium , officially the Kingdom of Belgium, is a federal state in Western Europe. It is a founding member of the European Union and hosts the EU's headquarters, and those of several other major international organisations such as NATO.Belgium is also a member of, or affiliated to, many...
. He was promoted to lieutenant colonel
Lieutenant colonel
Lieutenant colonel is a rank of commissioned officer in the armies and most marine forces and some air forces of the world, typically ranking above a major and below a colonel. The rank of lieutenant colonel is often shortened to simply "colonel" in conversation and in unofficial correspondence...
in 1919 and became a colonel
Colonel
Colonel , abbreviated Col or COL, is a military rank of a senior commissioned officer. It or a corresponding rank exists in most armies and in many air forces; the naval equivalent rank is generally "Captain". It is also used in some police forces and other paramilitary rank structures...
in the reserves in 1922. In October 1922, Prince Arthur was promoted to the honorary rank of major general and became an aide-de-camp to his first cousin, King George V
George V of the United Kingdom
George V was King of the United Kingdom and the British Dominions, and Emperor of India, from 6 May 1910 through the First World War until his death in 1936....
.

Since George V's children were too young to undertake public duties until after World War I, Prince Arthur attended a variety of ceremonial duties at home and abroad.

After their marriage, Arthur and Alexandra were styled, Their Royal Highnesses Prince and Princess Arthur of Connaught.

Together they had one child:

After the accession of his cousin, King George V
George V of the United Kingdom
George V was King of the United Kingdom and the British Dominions, and Emperor of India, from 6 May 1910 through the First World War until his death in 1936....
, Prince Arthur was the most senior male member of the Royal Family over the age of 18 to reside in the United Kingdom. As such, he undertook a wide variety of royal duties on behalf of the King, and acted as a Counsellor of State
Counsellor of State
In the United Kingdom, Counsellors of State are senior members of the British royal family to whom the Monarch, currently Elizabeth II, delegates certain state functions and powers when she is in another Commonwealth realm, abroad or unavailable for other reasons...
during periods of the King's absence abroad.

In 1918, he was a guest aboard the Japanese battlecruiser
Battlecruiser
Battlecruisers were large capital ships built in the first half of the 20th century. They were developed in the first decade of the century as the successor to the armoured cruiser, but their evolution was more closely linked to that of the dreadnought battleship...
when she voyaged from Japan to Canada. In 1920, Prince Arthur succeeded Viscount Buxton as governor-general and commander-in-chief in South Africa. The Earl of Athlone
Earl of Athlone
The title of Earl of Athlone has been created three times. It was created first in the Peerage of Ireland in 1692 by King William III for the Dutch General Baron Godard van Reede, Lord of Ginkel, to honour him for his successful battles in Ireland. The title also had the subsidiary title of Baron...
succeeded him in these posts in 1924. Upon returning to Britain, Prince Arthur became involved in a number of charitable organizations, including serving as chairman of the board of directors of Middlesex Hospital. Like his father, the Duke of Connaught, he was active in the Freemasons, becoming Provincial Grand Master for Berkshire in 1924.

Prince Arthur of Connaught died of stomach cancer at age 55. He is buried in the Royal Burial Ground, Frogmore. One of his last public appearances was at the coronation of King George VI
George VI of the United Kingdom
George VI was King of the United Kingdom and the Dominions of the British Commonwealth from 11 December 1936 until his death...
in May 1937. His father, the Duke of Connaught, survived him by four years. Prince Arthur's only son, who used the courtesy title Earl of MacDuff after 1917, succeeded his paternal grandfather as 2nd Duke of Connaught and Strathearn and Earl of Sussex in 1942.

As a male-line grandchild of a British Sovereign, Prince Arthur was awarded, for his twenty-first birthday, the use of the royal arms, with an inescutcheon of the shield of Saxony, and differenced by a label argent, of five points, the outer pair and central point bearing crosses gules, and the inner pair fleur-de-lys azure. In 1917, the inescutcheon was dropped by royal warrant from George V
George V of the United Kingdom
George V was King of the United Kingdom and the British Dominions, and Emperor of India, from 6 May 1910 through the First World War until his death in 1936....
.