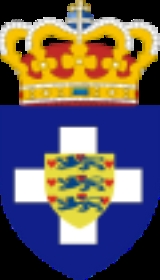 Encyclopedia
Princess Katherine of Greece and Denmark (born Katherine zu Schleswig-Holstein-Sonderburg-Glücksburg, Princess of Greece and Denmark) (4 May 1913 – 2 October 2007) was the third daughter and sixth child of King Constantine I of Greece
Constantine I of Greece
Constantine I was King of Greece from 1913 to 1917 and from 1920 to 1922. He was commander-in-chief of the Hellenic Army during the unsuccessful Greco-Turkish War of 1897 and led the Greek forces during the successful Balkan Wars of 1912–1913, in which Greece won Thessaloniki and doubled in...
(1868–1923) and Queen Sophie (1870–1932).

Her paternal grandparents were King George I of Greece
George I of Greece
George I was King of Greece from 1863 to 1913. Originally a Danish prince, George was only 17 years old when he was elected king by the Greek National Assembly, which had deposed the former king Otto. His nomination was both suggested and supported by the Great Powers...
, child of King Christian IX of Denmark
Christian IX of Denmark
Christian IX was King of Denmark from 16 November 1863 to 29 January 1906.Growing up as a prince of Schleswig-Holstein-Sonderburg-Glücksburg, a junior branch of the House of Oldenburg which had ruled Denmark since 1448, Christian was originally not in the immediate line of succession to the Danish...
, and Olga Konstantinovna of Russia
Olga Konstantinovna of Russia
Grand Duchess Olga Constantinovna of Russia , later Queen Olga of the Hellenes , was the queen consort of King George I of Greece and briefly in 1920, Queen Regent of Greece...
. Her maternal grandparents were Frederick III, German Emperor
Frederick III, German Emperor
Frederick III was German Emperor and King of Prussia for 99 days in 1888, the Year of the Three Emperors. Friedrich Wilhelm Nikolaus Karl known informally as Fritz, was the only son of Emperor William I and was raised in his family's tradition of military service...
, and the Empress Victoria
Victoria, Princess Royal
The Princess Victoria, Princess Royal was the eldest child of Queen Victoria of the United Kingdom and Prince Albert. She was created Princess Royal of the United Kingdom in 1841. She became German Empress and Queen of Prussia by marriage to German Emperor Frederick III...
, the eldest child of Queen Victoria and Prince Albert.

Her father abdicated in 1917, replaced as King by her brother Alexander. She and her parents were exile
Exile
Exile means to be away from one's home , while either being explicitly refused permission to return and/or being threatened with imprisonment or death upon return...
d to Switzerland
Switzerland
Switzerland name of one of the Swiss cantons. ; ; ; or ), in its full name the Swiss Confederation , is a federal republic consisting of 26 cantons, with Bern as the seat of the federal authorities. The country is situated in Western Europe,Or Central Europe depending on the definition....
. They were re-instated following Alexander's death in 1920, but abdicated again in 1922. Exiled again, this time to Sicily
Sicily
Sicily is a region of Italy, and is the largest island in the Mediterranean Sea. Along with the surrounding minor islands, it constitutes an autonomous region of Italy, the Regione Autonoma Siciliana Sicily has a rich and unique culture, especially with regard to the arts, music, literature,...
, her father died in Palermo
Palermo
Palermo is a city in Southern Italy, the capital of both the autonomous region of Sicily and the Province of Palermo. The city is noted for its history, culture, architecture and gastronomy, playing an important role throughout much of its existence; it is over 2,700 years old...
in 1923. The family moved to Villa Sparta in Florence
Florence
Florence is the capital city of the Italian region of Tuscany and of the province of Florence. It is the most populous city in Tuscany, with approximately 370,000 inhabitants, expanding to over 1.5 million in the metropolitan area....
, where Katherine took up painting. Her second brother George became King George II of the Hellenes in 1922, but was deposed in 1924.

Katherine was educated in England, at a boarding school at Broadstairs
Broadstairs
Broadstairs is a coastal town on the Isle of Thanet in the Thanet district of east Kent, England, about south-east of London. It is part of the civil parish of Broadstairs and St Peter's, which includes St. Peter's and had a population in 2001 of about 24,000. Situated between Margate and...
and then North Foreland Lodge. Her mother died in January 1932, after which she continued to live at the Villa Sparta with her sister, Helen. She and the future Elizabeth II were bridesmaid
Bridesmaid
The bridesmaids are members of the bride's wedding party in a wedding. A bridesmaid is typically a young woman, and often a close friend or sister. She attends to the bride on the day of a wedding or marriage ceremony...
s at the wedding of her first cousin, Princess Marina
Princess Marina, Duchess of Kent
Princess Marina, Duchess of Kent, née Princess Marina of Greece and Denmark was a member of the British Royal Family; the wife of Prince George, Duke of Kent, the fourth son of King George V of the United Kingdom and Mary of Teck....
, to the Duke of Kent
Duke of Kent
Duke of Kent is a title which has been created various times in the peerages of Great Britain and the United Kingdom, most recently as a royal dukedom for the fourth son of George V.-Pre-history:...
in 1934. It is interesting to note that through Christian IX of Denmark, Katherine was a first cousin of Prince Philip, Duke of Edinburgh
Prince Philip, Duke of Edinburgh
Prince Philip, Duke of Edinburgh is the husband of Elizabeth II. He is the United Kingdom's longest-serving consort and the oldest serving spouse of a reigning British monarch....
, and a second cousin once removed of Elizabeth II. However, in descent from Queen Victoria, she was a second cousin once removed of both of them.

Return to Greece and marriage

Her brother, George, was reinstated as King of Greece in 1935, and Katherine returned to Greece
Greece
Greece , officially the Hellenic Republic , and historically Hellas or the Republic of Greece in English, is a country in southeastern Europe....
with her sister, Irene. She joined the Greek Red Cross when the Second World War broke out in 1939. In 1941, she moved to South Africa
South Africa
The Republic of South Africa is a country in southern Africa. Located at the southern tip of Africa, it is divided into nine provinces, with of coastline on the Atlantic and Indian oceans...
with her third brother, Paul, in a Sunderland flying boat, where she continued to work as a nurse in Cape Town
Cape Town
Cape Town is the second-most populous city in South Africa, and the provincial capital and primate city of the Western Cape. As the seat of the National Parliament, it is also the legislative capital of the country. It forms part of the City of Cape Town metropolitan municipality...
. She heard no news of her sister Helen for four years. She returned to England in 1946, sailing the last leg from Egypt to England on the Cunard
Cunard Line
Cunard Line is a British-American owned shipping company based at Carnival House in Southampton, England and operated by Carnival UK. It has been a leading operator of passenger ships on the North Atlantic for over a century...
steamer
Steamboat
A steamboat or steamship, sometimes called a steamer, is a ship in which the primary method of propulsion is steam power, typically driving propellers or paddlewheels...
SS Ascania. On board, she met Major Richard Campbell Brandram MC
Military Cross
The Military Cross is the third-level military decoration awarded to officers and other ranks of the British Armed Forces; and formerly also to officers of other Commonwealth countries....
(5 August 1911 – 5 April 1994), son of Richard Andrew Brandram and Maud Campbell Blakeran, an officer in the Royal Artillery
Royal Artillery
The Royal Regiment of Artillery, commonly referred to as the Royal Artillery , is the artillery arm of the British Army. Despite its name, it comprises a number of regiments.-History:...
. They were engaged three weeks after they arrived in England, and married on 21 April 1947 at the Royal Palace in Athens. Her brother, George, died on 1 April, three weeks before the wedding, and was succeeded by her third brother Paul, or Pavlos. Now Paul I of Greece, he acted as best man at the wedding, and reigned until 1964.

She accompanied her new husband to his new British Army
British Army
The British Army is the land warfare branch of Her Majesty's Armed Forces in the United Kingdom. It came into being with the unification of the Kingdom of England and Scotland into the Kingdom of Great Britain in 1707. The new British Army incorporated Regiments that had already existed in England...
posting in Baghdad
Baghdad
Baghdad is the capital of Iraq, as well as the coterminous Baghdad Governorate. The population of Baghdad in 2011 is approximately 7,216,040...
, but they later settled in England. She received permission to style herself Lady Katherine Brandram and King George VI also granted her the status of a duke's daughter in the order of precedence
Order of precedence
An order of precedence is a sequential hierarchy of nominal importance of items. Most often it is used in the context of people by many organizations and governments...
. However, this style was only valid within the United Kingdom, as she remained Princess Katherine of Greece and Denmark. She and her husband lived in Eaton Square
Eaton Square
Eaton Square is a residential garden square in London's Belgravia district. It is one of the three garden squares built by the Grosvenor family when they developed the main part of Belgravia in the 19th century, and is named after Eaton Hall, the Grosvenor country house in Cheshire...
in Belgravia
Belgravia
Belgravia is a district of central London in the City of Westminster and the Royal Borough of Kensington and Chelsea. Noted for its immensely expensive residential properties, it is one of the wealthiest districts in the world...
, and later moved to Marlow
Marlow, Buckinghamshire
Marlow is a town and civil parish within Wycombe district in south Buckinghamshire, England...
.

Princess Katherine of Greece and Denmark and Major Richard Campbell Andrew Brandram, had one child; a son: