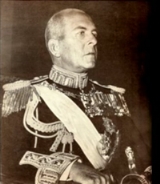 Paul was born in Athens
Athens
Athens , is the capital and largest city of Greece. Athens dominates the Attica region and is one of the world's oldest cities, as its recorded history spans around 3,400 years. Classical Athens was a powerful city-state...
, the third son of King Constantine I of Greece
Constantine I of Greece
Constantine I was King of Greece from 1913 to 1917 and from 1920 to 1922. He was commander-in-chief of the Hellenic Army during the unsuccessful Greco-Turkish War of 1897 and led the Greek forces during the successful Balkan Wars of 1912–1913, in which Greece won Thessaloniki and doubled in...
and his wife, Princess Sophia of Prussia
Sophia of Prussia
Princess Sophie of Prussia was Queen of the Hellenes as the wife of King Constantine I.-Princess of Prussia:...
. He was trained as a naval officer.

Before his marriage he is alleged to have invited the homosexual literary muse, Denham Fouts
Denham Fouts
Denham Fouts was an American male prostitute, socialite and literary muse. He served as the inspiration for characters by Truman Capote, Gore Vidal, Christopher Isherwood and Gavin Lambert.-Biography:...
, on a cruise of the Aegean Sea
Aegean Sea
The Aegean Sea[p] is an elongated embayment of the Mediterranean Sea located between the southern Balkan and Anatolian peninsulas, i.e., between the mainlands of Greece and Turkey. In the north, it is connected to the Marmara Sea and Black Sea by the Dardanelles and Bosporus...
, perhaps because they were lovers. However, Fouts's friend John B. L. Goodwin said Fouts often made up stories about his life, and literary critic Katherine Bucknell
Katherine Bucknell
Katherine Bucknell, American scholar and novelist who resides in England.Katherine Bucknell is the editor of W. H. Auden's Juvenilia and of three volumes of the diaries of Christopher Isherwood....
thought many of the tales about him were myth.

From 1917 to 1920, Paul lived in exile with his father, Constantine I. From 1923 to 1935, and again from 1941 to 1946, he lived in exile again, this time with his brother, George II
George II of Greece
George II reigned as King of Greece from 1922 to 1924 and from 1935 to 1947.-Early life, first period of kingship and exile:George was born at the royal villa at Tatoi, near Athens, the eldest son of King Constantine I of Greece and his wife, Princess Sophia of Prussia...
. During most of World War II
World War II
World War II, or the Second World War , was a global conflict lasting from 1939 to 1945, involving most of the world's nations—including all of the great powers—eventually forming two opposing military alliances: the Allies and the Axis...
, when Greece was under German occupation, he was with the Greek government-in-exile in London
London
London is the capital city of :England and the :United Kingdom, the largest metropolitan area in the United Kingdom, and the largest urban zone in the European Union by most measures. Located on the River Thames, London has been a major settlement for two millennia, its history going back to its...
and Cairo
Cairo
Cairo , is the capital of Egypt and the largest city in the Arab world and Africa, and the 16th largest metropolitan area in the world. Nicknamed "The City of a Thousand Minarets" for its preponderance of Islamic architecture, Cairo has long been a centre of the region's political and cultural life...
. From Cairo, he broadcast messages to the Greek people.

Paul returned to Greece in 1946. He succeeded to the throne in 1947, on the death of his childless elder brother, King George II
George II of Greece
George II reigned as King of Greece from 1922 to 1924 and from 1935 to 1947.-Early life, first period of kingship and exile:George was born at the royal villa at Tatoi, near Athens, the eldest son of King Constantine I of Greece and his wife, Princess Sophia of Prussia...
, during the Greek Civil War
Greek Civil War
The Greek Civil War was fought from 1946 to 1949 between the Greek governmental army, backed by the United Kingdom and United States, and the Democratic Army of Greece , the military branch of the Greek Communist Party , backed by Bulgaria, Yugoslavia and Albania...
(between Greek Communists
Communism
Communism is a social, political and economic ideology that aims at the establishment of a classless, moneyless, revolutionary and stateless socialist society structured upon common ownership of the means of production...
and the non-communist Greek government). In 1947 he was unable to attend the wedding of his first cousin, Prince Philip, Duke of Edinburgh
Prince Philip, Duke of Edinburgh
Prince Philip, Duke of Edinburgh is the husband of Elizabeth II. He is the United Kingdom's longest-serving consort and the oldest serving spouse of a reigning British monarch....
to the future Queen Elizabeth II of the United Kingdom
Elizabeth II of the United Kingdom
Elizabeth II is the constitutional monarch of 16 sovereign states known as the Commonwealth realms: the United Kingdom, Canada, Australia, New Zealand, Jamaica, Barbados, the Bahamas, Grenada, Papua New Guinea, the Solomon Islands, Tuvalu, Saint Lucia, Saint Vincent and the Grenadines, Belize,...
as he was suffering from typhoid fever.

By 1949 the Civil War was effectively over, with the Communist insurgents ceasing the majority of their operations, and the task of rebuilding the shattered north of the country began.

In the 1950s Greece recovered economically, and diplomatic and trade links were strengthened by Paul’s state visits abroad. He became the first Greek Monarch to visit a Turkish Head of State. However, links with Britain became strained over Cyprus
Cyprus
Cyprus , officially the Republic of Cyprus , is a Eurasian island country, member of the European Union, in the Eastern Mediterranean, east of Greece, south of Turkey, west of Syria and north of Egypt. It is the third largest island in the Mediterranean Sea.The earliest known human activity on the...
, where the majority Greek population favored union with the homeland, which Britain, as the colonial power, would not endorse. Eventually, Cyprus became an independent state in 1960.

In December 1959 Prince Maximillian of Bavaria
Prince Max, Duke in Bavaria
Max-Emanuel Ludwig Maria Herzog in Bayern, sometimes styled Prince Max of Bavaria, Duke in Bavaria, born 21 January 1937 as son of Albrecht, Duke of Bavaria, is the heir presumptive to both the headship of the former Bavarian Royal House and the Jacobite Succession...
presented the coronation
Coronation
A coronation is a ceremony marking the formal investiture of a monarch and/or their consort with regal power, usually involving the placement of a crown upon their head and the presentation of other items of regalia...
regalia
Regalia
Regalia is Latin plurale tantum for the privileges and the insignia characteristic of a Sovereign.The word stems from the Latin substantivation of the adjective regalis, 'regal', itself from Rex, 'king'...
of King Otto of Greece
Otto of Greece
Otto, Prince of Bavaria, then Othon, King of Greece was made the first modern King of Greece in 1832 under the Convention of London, whereby Greece became a new independent kingdom under the protection of the Great Powers .The second son of the philhellene King Ludwig I of Bavaria, Otto ascended...
to the King. It had been almost a century since they were last in Greece.

Meanwhile, republican sentiment was growing in Greece. Both Paul and Frederika attracted criticism for their interference in politics, frequent foreign travels, and the cost of maintaining the Royal Family. Paul responded by economising and donated his private estate at Polidendri to the State.

In 1959, he had an operation for a cataract
Cataract
A cataract is a clouding that develops in the crystalline lens of the eye or in its envelope, varying in degree from slight to complete opacity and obstructing the passage of light...
, and in 1963 an emergency operation for appendicitis
Appendicitis
Appendicitis is a condition characterized by inflammation of the appendix. It is classified as a medical emergency and many cases require removal of the inflamed appendix, either by laparotomy or laparoscopy. Untreated, mortality is high, mainly because of the risk of rupture leading to...
. In late February 1964, he underwent a further operation for stomach cancer, and died about a week later in Athens.