Encyclopedia
The "Powder keg
Powder Keg
A powder keg is a barrel of gunpowder. The powder keg was the primary method for storing and transporting large quantities of black powder up until the 1870s and the adoption of the modern cased bullet...
of Europe", sometimes alternately known as the "Balkan Powder Keg", refers to the Balkans
Balkans
The Balkans is a geopolitical and cultural region of southeastern Europe...
in the early part of the 20th century. In this time period there were a number of overlapping claims to territories and spheres of influence between the major European powers such as Russia
Russia
Russia or , officially known as both Russia and the Russian Federation , is a country in northern Eurasia. It is a federal semi-presidential republic, comprising 83 federal subjects...
and Austria-Hungary
Austria-Hungary
Austria-Hungary , more formally known as the Kingdoms and Lands Represented in the Imperial Council and the Lands of the Holy Hungarian Crown of Saint Stephen, was a constitutional monarchic union between the crowns of the Austrian Empire and the Kingdom of Hungary in...
and, to a lesser degree, Imperial Germany, Great Britain
Great Britain
Great Britain or Britain is an island situated to the northwest of Continental Europe. It is the ninth largest island in the world, and the largest European island, as well as the largest of the British Isles...
, and Italy
Italy
Italy , officially the Italian Republic languages]] under the European Charter for Regional or Minority Languages. In each of these, Italy's official name is as follows:;;;;;;;;), is a unitary parliamentary republic in South-Central Europe. To the north it borders France, Switzerland, Austria and...
. In addition to the imperialistic ambitions and interests in this region, there was a growth in nationalism with the indigenous peoples of this region leading to the formation of the independent states of Greece
Greece
Greece , officially the Hellenic Republic , and historically Hellas or the Republic of Greece in English, is a country in southeastern Europe....
, Serbia
Serbia
Serbia , officially the Republic of Serbia , is a landlocked country located at the crossroads of Central and Southeast Europe, covering the southern part of the Carpathian basin and the central part of the Balkans...
, Montenegro
Montenegro
Montenegro Montenegrin: Crna Gora Црна Гора , meaning "Black Mountain") is a country located in Southeastern Europe. It has a coast on the Adriatic Sea to the south-west and is bordered by Croatia to the west, Bosnia and Herzegovina to the northwest, Serbia to the northeast and Albania to the...
, Bulgaria
Bulgaria
Bulgaria , officially the Republic of Bulgaria , is a parliamentary democracy within a unitary constitutional republic in Southeast Europe. The country borders Romania to the north, Serbia and Macedonia to the west, Greece and Turkey to the south, as well as the Black Sea to the east...
and Romania
Romania
Romania is a country located at the crossroads of Central and Southeastern Europe, on the Lower Danube, within and outside the Carpathian arch, bordering on the Black Sea...
.

Within these nations there were movements to create "greater" nations, that is to enlarge the boundaries of the state beyond those areas where the national ethnic group was in the majority. This led to conflict between the newly independent nations and their former oppressor, Ottoman Turkey. Additionally, it led to differences between the Balkan nations who wished to gain territory at the expense of their neighbors. Both the conflict with Ottoman Turkey and between the Balkan nations led to the Balkan Wars
Balkan Wars
The Balkan Wars were two conflicts that took place in the Balkans in south-eastern Europe in 1912 and 1913.By the early 20th century, Montenegro, Bulgaria, Greece and Serbia, the countries of the Balkan League, had achieved their independence from the Ottoman Empire, but large parts of their ethnic...
in 1912-1913. 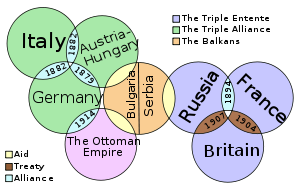 In a different vein, the ideology of Pan-Slavism
Pan-Slavism
Pan-Slavism was a movement in the mid-19th century aimed at unity of all the Slavic peoples. The main focus was in the Balkans where the South Slavs had been ruled for centuries by other empires, Byzantine Empire, Austria-Hungary, the Ottoman Empire, and Venice...
in Balkans gained popularity; the movement built around it in the region sought to unite all of the Slavs of the Balkans into one nation, Yugoslavia
Yugoslavia
Yugoslavia refers to three political entities that existed successively on the western part of the Balkans during most of the 20th century....
. This, however, would require the union of several Balkan states and territory which was part of Austria-Hungary. For this reason, Pan-Slavism was strongly opposed by Austria-Hungary, while it was supported by Russia which viewed itself as leader of all Slavic nations.

To complicate matters, in the years preceding World War I
World War I
World War I , which was predominantly called the World War or the Great War from its occurrence until 1939, and the First World War or World War I thereafter, was a major war centred in Europe that began on 28 July 1914 and lasted until 11 November 1918...
, there existed a tangle of Great Power
Great power
A great power is a nation or state that has the ability to exert its influence on a global scale. Great powers characteristically possess military and economic strength and diplomatic and cultural influence which may cause small powers to consider the opinions of great powers before taking actions...
alliances, both formal and informal, public and secret. Following the Napoleonic Wars
Napoleonic Wars
The Napoleonic Wars were a series of wars declared against Napoleon's French Empire by opposing coalitions that ran from 1803 to 1815. As a continuation of the wars sparked by the French Revolution of 1789, they revolutionised European armies and played out on an unprecedented scale, mainly due to...
there had existed a "balance of power"
Balance of power in international relations
In international relations, a balance of power exists when there is parity or stability between competing forces. The concept describes a state of affairs in the international system and explains the behavior of states in that system...
to, in theory, prevent major wars. This theory held that opposing combinations of powers in Europe would be evenly matched entailing that any general war would be far too costly for any nation to risk entering. This system began to fall apart as the Ottoman Empire which had been seen as a check on Russian power began to crumble, and as Germany, which had been a loose confederation
Confederation
A confederation in modern political terms is a permanent union of political units for common action in relation to other units. Usually created by treaty but often later adopting a common constitution, confederations tend to be established for dealing with critical issues such as defense, foreign...
of minor states, was united into a major power. Not only did these changes lead to a realignment of power, but of interests as well.

All these factors, and many others, conspired to bring about the First World War. As is insinuated by the name "the powder keg of Europe," the Balkans were not the major issue at stake in the war, but were merely the catalyst that led to the conflagration. The Chancellor of Germany in the late 19th century, Otto von Bismarck
Otto von Bismarck
Otto Eduard Leopold, Prince of Bismarck, Duke of Lauenburg , simply known as Otto von Bismarck, was a Prussian-German statesman whose actions unified Germany, made it a major player in world affairs, and created a balance of power that kept Europe at peace after 1871.As Minister President of...
, correctly predicted it would be the source of major conflict in Europe
Europe
Europe is, by convention, one of the world's seven continents. Comprising the westernmost peninsula of Eurasia, Europe is generally 'divided' from Asia to its east by the watershed divides of the Ural and Caucasus Mountains, the Ural River, the Caspian and Black Seas, and the waterways connecting...
.

The powder keg "exploded" causing the First World War, which began with a conflict between imperial Austria-Hungary and Pan-Slavic Serbia. Archduke Franz Ferdinand of Austria
Archduke Franz Ferdinand of Austria
Franz Ferdinand was an Archduke of Austria-Este, Austro-Hungarian and Royal Prince of Hungary and of Bohemia, and from 1889 until his death, heir presumptive to the Austro-Hungarian throne. His assassination in Sarajevo precipitated Austria-Hungary's declaration of war against Serbia...
, a member of the Austrian royal family, was assassinated by a Bosnian of Serb extraction, a member of the Young Bosnia
Young Bosnia
Young Bosnia was a revolutionary movement active before World War I, the members were predominantly school students who were ethnic Serbs, but included Bosniaks...
movement. Austria-Hungary then issued an ultimatum
Ultimatum
An ultimatum is a demand whose fulfillment is requested in a specified period of time and which is backed up by a threat to be followed through in case of noncompliance. An ultimatum is generally the final demand in a series of requests...
to Serbia intended to provoke it to war through extreme demands. The Serbian government reservedly accepted all of the conditions of the ultimatum, except for condition number six which demanded the inclusion of Austria-Hungary in Serbia's judicial inquiry into the assassination. Serbia indicated this would be unconstitutional and a violation of its sovereignty, and Austria-Hungary used it as a casus belli
Casus belli
is a Latin expression meaning the justification for acts of war. means "incident", "rupture" or indeed "case", while means bellic...
to invade Serbia. With Germany fully supporting them, the Austro-Hungarians partially mobilized
Mobilization
Mobilization is the act of assembling and making both troops and supplies ready for war. The word mobilization was first used, in a military context, in order to describe the preparation of the Prussian army during the 1850s and 1860s. Mobilization theories and techniques have continuously changed...
their army against Serbia, which had already begun mobilizing before replying to the Austro-Hungarian July Ultimatum
July Ultimatum
The July Crisis was a diplomatic crisis among the major powers of Europe in the summer of 1914 that led to the First World War...
. Russia then began mobilizing in support of Serbia, though not bound by treaty to do so. Due to the system of European alliances, this led to a series of escalating Austrian and Russian mobilizations and eventually Britain and France were also obliged to mobilize and declare war.