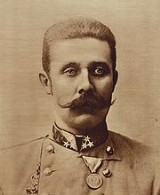 Overview
Franz Ferdinand was an Archduke
Archduke
The title of Archduke denotes a noble rank above Duke and below King, used only by princes of the Houses of Habsburg and Habsburg-Lorraine....
of Austria-Este
Austria-Este
Archduke of Austria-Este and Habsburg-Este are a title and a surname which have been used by several cadet branches of the House of Habsburg-Lorraine to denote a connection with the extinct Italian princely and feudal family of Este and the Duchy of Modena ruled by them...
, Austro-Hungarian and Royal Prince of Hungary
Hungary
Hungary , officially the Republic of Hungary , is a landlocked country in Central Europe. It is situated in the Carpathian Basin and is bordered by Slovakia to the north, Ukraine and Romania to the east, Serbia and Croatia to the south, Slovenia to the southwest and Austria to the west. The...
and of Bohemia
Bohemia
Bohemia is a historical region in central Europe, occupying the western two-thirds of the traditional Czech Lands. It is located in the contemporary Czech Republic with its capital in Prague...
, and from 1889 until his death, heir presumptive
Heir Presumptive
An heir presumptive or heiress presumptive is the person provisionally scheduled to inherit a throne, peerage, or other hereditary honour, but whose position can be displaced by the birth of an heir or heiress apparent or of a new heir presumptive with a better claim to the position in question...
to the Austro-Hungarian
Austria-Hungary
Austria-Hungary , more formally known as the Kingdoms and Lands Represented in the Imperial Council and the Lands of the Holy Hungarian Crown of Saint Stephen, was a constitutional monarchic union between the crowns of the Austrian Empire and the Kingdom of Hungary in...
throne. His assassination in Sarajevo
Sarajevo
Sarajevo |Bosnia]], surrounded by the Dinaric Alps and situated along the Miljacka River in the heart of Southeastern Europe and the Balkans....
precipitated Austria-Hungary's declaration of war
Declaration of war
A declaration of war is a formal act by which one nation goes to war against another. The declaration is a performative speech act by an authorized party of a national government in order to create a state of war between two or more states.The legality of who is competent to declare war varies...
against Serbia
Serbia
Serbia , officially the Republic of Serbia , is a landlocked country located at the crossroads of Central and Southeast Europe, covering the southern part of the Carpathian basin and the central part of the Balkans...
. This caused the Central Powers
Central Powers
The Central Powers were one of the two warring factions in World War I , composed of the German Empire, the Austro-Hungarian Empire, the Ottoman Empire, and the Kingdom of Bulgaria...
(including Germany
German Empire
The German Empire refers to Germany during the "Second Reich" period from the unification of Germany and proclamation of Wilhelm I as German Emperor on 18 January 1871, to 1918, when it became a federal republic after defeat in World War I and the abdication of the Emperor, Wilhelm II.The German...
and Austria-Hungary) and the Allies of World War I
Allies of World War I
The Entente Powers were the countries at war with the Central Powers during World War I. The members of the Triple Entente were the United Kingdom, France, and the Russian Empire; Italy entered the war on their side in 1915...
(countries allied with Serbia) to declare war on each other, starting World War I
World War I
World War I , which was predominantly called the World War or the Great War from its occurrence until 1939, and the First World War or World War I thereafter, was a major war centred in Europe that began on 28 July 1914 and lasted until 11 November 1918...
.

He was born in Graz
Graz
The more recent population figures do not give the whole picture as only people with principal residence status are counted and people with secondary residence status are not. Most of the people with secondary residence status in Graz are students...
, Austria, the eldest son of Archduke Karl Ludwig of Austria
Archduke Karl Ludwig of Austria
Archduke Karl Ludwig Joseph Maria of Austria was the younger brother of Franz Joseph I of Austria and the father of Archduke Franz Ferdinand of Austria , whose assassination ignited the start of World War I.-Biography:He was born at Schönbrunn in Vienna, the son of Archduke Franz Karl of Austria ...
(younger brother of Franz Joseph
Franz Joseph I of Austria
Franz Joseph I or Francis Joseph I was Emperor of Austria, King of Bohemia, King of Croatia, Apostolic King of Hungary, King of Galicia and Lodomeria and Grand Duke of Cracow from 1848 until his death in 1916.In the December of 1848, Emperor Ferdinand I of Austria abdicated the throne as part of...
and Maximilian
Maximilian I of Mexico
Maximilian I was the only monarch of the Second Mexican Empire.After a distinguished career in the Austrian Navy, he was proclaimed Emperor of Mexico on April 10, 1864, with the backing of Napoleon III of France and a group of Mexican monarchists who sought to revive the Mexican monarchy...
) and of his second wife, Princess Maria Annunciata of Bourbon-Two Sicilies.

what country did archduke franz ferdinand get assassinated
More

Where is the car Archduke Franz Ferdinand died in?

What were Franz Ferdinand's political views?

How did the Archduke's assassination lead to WW I?