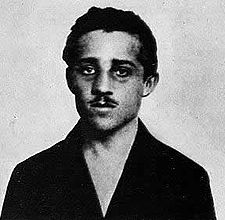 Young Bosnia was a revolutionary movement
Revolutionary movement
Revolutionary movement is a specific type of social movement dedicated to carrying out a revolution. Charles Tilly defines it as a social movement advancing exclusive competing claims to control of the state, or some segment of it. An example of a revolutionary movement is the Armenian...
active before World War I
World War I
World War I , which was predominantly called the World War or the Great War from its occurrence until 1939, and the First World War or World War I thereafter, was a major war centred in Europe that began on 28 July 1914 and lasted until 11 November 1918...
, the members were predominantly school students who were ethnic Serbs
Serbs
The Serbs are a South Slavic ethnic group of the Balkans and southern Central Europe. Serbs are located mainly in Serbia, Montenegro and Bosnia and Herzegovina, and form a sizable minority in Croatia, the Republic of Macedonia and Slovenia. Likewise, Serbs are an officially recognized minority in...
, but included Bosniaks
Bosniaks
The Bosniaks or Bosniacs are a South Slavic ethnic group, living mainly in Bosnia and Herzegovina, with a smaller minority also present in other lands of the Balkan Peninsula especially in Serbia, Montenegro and Croatia...
. The motivation and goals of the group is disputed among historians between either being a Serbian nationalist
Serbdom
Serbdom is an ambiguous term used by ethnic Serbs to denote a type of patriotism or solidarity of the Serbian people. It is distinguished from Serbian nationalism by lack of a political agenda and absence of antagonistic or aggressive attitudes...
(Unification of Serbs under foreign rule) or a Pan-Yugoslav
Yugoslavia
Yugoslavia refers to three political entities that existed successively on the western part of the Balkans during most of the 20th century....
(Unification of South Slavs
South Slavs
The South Slavs are the southern branch of the Slavic peoples and speak South Slavic languages. Geographically, the South Slavs are native to the Balkan peninsula, the southern Pannonian Plain and the eastern Alps...
, Pan-Slavic) organization.

Two notable organizations are often referred to under the banner Young Bosnia: the "Narodna Odbrana
Narodna Odbrana
Narodna Odbrana was a Serbian nationalist group that was created around 1908 as a reaction to the Austria-Hungarian annexation of Bosnia and Herzegovina. At the time, it was concerned with the protection of ethnic Serbs in Austria-Hungary...
" and the "Black Hand
Black Hand
Unification or Death , unofficially known as the Black Hand , was a secret military society formed by members of the Serbian army in the Kingdom of Serbia, which was founded on September 6, 1901. It was intent on uniting all of the territories containing significant Serb populations annexed by...
." During a Serbian kangaroo court
Kangaroo court
A kangaroo court is "a mock court in which the principles of law and justice are disregarded or perverted".The outcome of a trial by kangaroo court is essentially determined in advance, usually for the purpose of ensuring conviction, either by going through the motions of manipulated procedure or...
in French-occupied Salonika in 1916-1917, Chief of Serbian Military Intelligence Dragutin Dimitrijević Apis testified that he had organized the assassination of Archduke Franz Ferdinand of Austria
Assassination of Archduke Franz Ferdinand of Austria
On 28 June 1914, Archduke Franz Ferdinand of Austria, heir presumptive to the Austro-Hungarian throne, and his wife, Sophie, Duchess of Hohenberg, were shot dead in Sarajevo, by Gavrilo Princip, one of a group of six Bosnian Serb assassins coordinated by Danilo Ilić...
, in Sarajevo on June 28th, 1914, (the assassin was Gavrilo Princip
Gavrilo Princip
Gavrilo Princip was the Bosnian Serb who assassinated Archduke Franz Ferdinand of Austria and his wife, Sophie, Duchess of Hohenberg, in Sarajevo on 28 June 1914...
). In the process, he used not only his power over elements of the Serbian military, but also the Black Hand. Leaders of the Black Hand in turn had penetrated the "Narodna Obrana" and used the Narodna organization to infiltrate the arms and assassins into Sarajevo.

The Serbian National Organization of Petar Kočić
Petar Kocic
Petar Kočić was a Serb prose writer and politician from Bosnia and Herzegovina. He was active in the Serbian National Organization with ties to the Mlada Bosna revolutionaries, after which he seceded with his closest supporters leading a wing under his leadership.Like both Borisav Stanković, who...
had ties with the Young Bosnia.

"The political union of the Yugoslavs [..] was my basic idea [..] I am a Yugoslav nationalist, aiming for the unification of all Yugoslavs, and I do not care what form of state, but it must be free from Austria"
-Gavrilo Princip
Gavrilo Princip
Gavrilo Princip was the Bosnian Serb who assassinated Archduke Franz Ferdinand of Austria and his wife, Sophie, Duchess of Hohenberg, in Sarajevo on 28 June 1914...
during his trial