Encyclopedia
Porvoo (ˈporʋoː; ˈbɔrɡo) is a city and a municipality situated on the southern coast of Finland
Finland
Finland , officially the Republic of Finland, is a Nordic country situated in the Fennoscandian region of Northern Europe. It is bordered by Sweden in the west, Norway in the north and Russia in the east, while Estonia lies to its south across the Gulf of Finland.Around 5.4 million people reside...
approximately 50 kilometre east of Helsinki
Helsinki
Helsinki is the capital and largest city in Finland. It is in the region of Uusimaa, located in southern Finland, on the shore of the Gulf of Finland, an arm of the Baltic Sea. The population of the city of Helsinki is , making it by far the most populous municipality in Finland. Helsinki is...
. Porvoo is one of the six medieval
Middle Ages
The Middle Ages is a periodization of European history from the 5th century to the 15th century. The Middle Ages follows the fall of the Western Roman Empire in 476 and precedes the Early Modern Era. It is the middle period of a three-period division of Western history: Classic, Medieval and Modern...
towns in Finland, first mentioned as a city in texts from 14th century. Porvoo is the seat of the Swedish speaking Diocese of Borgå
Diocese of Borgå
The Diocese of Borgå is a Diocese for the Swedish speaking minority of Finland. It is a part of the Evangelical Lutheran Church of Finland. Porvoo is also the old seat of the present-day Diocese of Tampere....
of the Evangelical Lutheran Church of Finland
Evangelical Lutheran Church of Finland
The Evangelical Lutheran Church of Finland is the national church of Finland. The church professes the Lutheran branch of Christianity, and is a member of the Porvoo Communion....
.

Porvoo was first mentioned in documents in the early 14th century, and Porvoo was given city rights around 1380, even though according to some sources the city was founded in 1346. The old city of Porvoo was formally disestablished and the new city of Porvoo founded in 1997 when the city of Porvoo and the Rural municipality of Porvoo were consolidated. When Sweden
Sweden
Sweden , officially the Kingdom of Sweden , is a Nordic country on the Scandinavian Peninsula in Northern Europe. Sweden borders with Norway and Finland and is connected to Denmark by a bridge-tunnel across the Öresund....
lost the city of Viborg
Vyborg
Vyborg is a town in Leningrad Oblast, Russia, situated on the Karelian Isthmus near the head of the Bay of Vyborg, to the northwest of St. Petersburg and south from Russia's border with Finland, where the Saimaa Canal enters the Gulf of Finland...
to Russia in 1721, the episcopal seat was moved to Porvoo. At this time, Porvoo was the second largest city in Finland. After the conquest of Finland by Russian armies in 1808 Sweden had to cede Finland to Russia in 1809 (the Treaty of Fredrikshamn). The Diet of Porvoo
Diet of Porvoo
The Diet of Porvoo , was the summoned legislative assembly to establish the Grand Principality of Finland in 1809 and the heir of the powers of the Swedish Riksdag of the Estates...
in 1809 was a landmark in the History of Finland
History of Finland
The land area that now makes up Finland was settled immediately after the Ice Age, beginning from around 8500 BCE. Most of the region was part of the Kingdom of Sweden from the 13th century to 1809, when it was ceded to the Russian Empire, becoming the autonomous Grand Duchy of Finland. The...
. The Tsar Alexander I
Alexander I of Russia
Alexander I of Russia , served as Emperor of Russia from 23 March 1801 to 1 December 1825 and the first Russian King of Poland from 1815 to 1825. He was also the first Russian Grand Duke of Finland and Lithuania....
confirmed the new Finnish constitution
Constitution of Finland
The Constitution of Finland is the supreme source of national law of Finland. It defines the basis, structures and organisation of government, the relationship between the different constitutional organs, and lays out the fundamental rights of Finnish citizens...
(which was essentially the Swedish constitution from 1772), and made Finland an autonomous Grand Duchy
Grand duchy
A grand duchy, sometimes referred to as a grand dukedom, is a territory whose head of state is a monarch, either a grand duke or grand duchess.Today Luxembourg is the only remaining grand duchy...
.

The town received its name from a Swedish earth fortress
Fortification
Fortifications are military constructions and buildings designed for defence in warfare and military bases. Humans have constructed defensive works for many thousands of years, in a variety of increasingly complex designs...
near the river Porvoonjoki
Porvoonjoki
Porvoonjoki is a small river in Finland. The Mediaeval town of Porvoo is situated in the river delta....
which flows through the town. The name Porvoo is the Fennicised version of the Swedish name () and its parts of borg meaning "castle
Castle
A castle is a type of fortified structure built in Europe and the Middle East during the Middle Ages by European nobility. Scholars debate the scope of the word castle, but usually consider it to be the private fortified residence of a lord or noble...
" and å "river
River
A river is a natural watercourse, usually freshwater, flowing towards an ocean, a lake, a sea, or another river. In a few cases, a river simply flows into the ground or dries up completely before reaching another body of water. Small rivers may also be called by several other names, including...
".

The town is famed for its "Old Town" ( in Swedish
Finland-Swedish
Finland Swedish is a general term for the closely related cluster of dialects of Swedish spoken in Finland by Swedish-speaking Finns as their mother tongue...
), a dense mediaeval street pattern with predominantly wooden houses. The Old Town came close to being demolished in the 19th century by a new urban plan for the city. The plan was cancelled due to a popular resistance headed by Count Louis Sparre
Louis Sparre
Count Pehr Louis Sparre was a Swedish painter, designer and draughtsman, most noted for his early work in the Finnish national romanticism and jugend styles...

The central point of the old town is the medieval, stone and brick Porvoo Cathedral
Porvoo Cathedral
Porvoo cathedral is a cathedral in Porvoo, Finland. It was built in the 15th century, although the oldest parts date from the 13th century. It is used by the Evangelical Lutheran Church of Finland and is the seat of the Diocese of Borgå, Finland's Swedish-speaking diocese...
which gave its name to the Porvoo Communion
Porvoo Communion
The Porvoo Communion is a communion of 12 mainly northern European Anglican and Lutheran churches. It was established in 1992 by an agreement entitled the Porvoo Common Statement which establishes full communion between and among the churches...
– an inter-church agreement between a number of Anglican and Lutheran denomination
Religious denomination
A religious denomination is a subgroup within a religion that operates under a common name, tradition, and identity.The term describes various Christian denominations...
s. The cathedral was damaged by fire on 29 May 2006: the roof was totally destroyed but the interior is largely intact. A drunken youth had played with fire at the church, unaware of recent tarwork and nearby tarcontainers, accidentally causing a large fire. He was later sentenced to a short prison term and restitutions of 4.3 million Euro.

The red-coloured wooden storage buildings on the riverside are a proposed UNESCO
UNESCO
The United Nations Educational, Scientific and Cultural Organization is a specialized agency of the United Nations...
world heritage site. Already by the early 19th century the authorities understood the value of the old town, and so with the need for growth a plan was made for a 'new town' built adjacent to the old town, following a grid plan but with houses also built in wood. 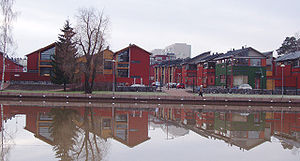 By the end of the 20th century there was pressure to develop the essentially untouched western side of the river. There was concern that growth would necessitate the construction of a second bridge across the river into the town, thus putting further strain on the wooden town. An architectral competition was held in 1990, the winning entry of which proposed building the second bridge. Plans for the western side of the river have progressed under the direction of architect Tuomas Siitonen, and both a vehicle bridge and a pedestrian bridge have been built. The design for new housing is based on a typology derived from the old store houses on the opposite side of the river. Yet another new development entails the construction of a large business park called King's Gate ( in Finnish, in Swedish), which is presently under construction.

Porvoo railway station does not receive regular train services, but special excursion trains from Kerava (either with steam locomotives or comprising former VR
VR Group
VR or VR Group is a state-owned railway company in Finland. Formerly known as Suomen Valtion Rautatiet until 1922 and Valtionrautatiet / Statsjärnvägarna until 1995...
diesel railcars from the 1950s) operate on summer Saturdays.

Suomenkylä, or in Swedish, is a village north of the center of Porvoo and beside the Porvoo river. Suomenkylä has an old school founded by Johannes Linnankoski
Johannes Linnankoski
Johannes Linnankoski was a Finnish author. His most famous work is the sensual Laulu tulipunaisesta kukasta...
in 1898. The village of Suomenkylä also has two burial places from Bronze Age
Bronze Age
The Bronze Age is a period characterized by the use of copper and its alloy bronze as the chief hard materials in the manufacture of some implements and weapons. Chronologically, it stands between the Stone Age and Iron Age...
.

Kerkkoo, or in Swedish, is a village north of the center of Porvoo and beside the Porvoo river. Kerkkoo has an old school which is over 100 years old and still active. From the village of Kerkkoo archeologists and townspeople found a stone axe from the Bronze Age
Bronze Age
The Bronze Age is a period characterized by the use of copper and its alloy bronze as the chief hard materials in the manufacture of some implements and weapons. Chronologically, it stands between the Stone Age and Iron Age...
.

The local team Porvoon Akilles, or just Akilles, plays in the highest bandy
Bandy
Bandy is a team winter sport played on ice, in which skaters use sticks to direct a ball into the opposing team's goal.The rules of the game have many similarities to those of association football: the game is played on a rectangle of ice the same size as a football field. Each team has 11 players,...
division and has become Finnish champions twice.
Sami Hyypiä,a football player for the Finnish national team is the main sports pride of Porvoo.

Porvoo is twinned
Town twinning
Twin towns and sister cities are two of many terms used to describe the cooperative agreements between towns, cities, and even counties in geographically and politically distinct areas to promote cultural and commercial ties.- Terminology :...
with the following cities::