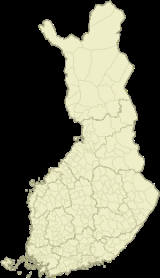 The municipalities represent the local level of administration in Finland
Finland
Finland , officially the Republic of Finland, is a Nordic country situated in the Fennoscandian region of Northern Europe. It is bordered by Sweden in the west, Norway in the north and Russia in the east, while Estonia lies to its south across the Gulf of Finland.Around 5.4 million people reside...
and act as the fundamental, self-governing administrative units of the country. The entire country is incorporated into municipalities and legally, all municipalities are equal, although certain municipalities are called cities. Municipalities have the right to levy a flat percentual income tax
Income tax
An income tax is a tax levied on the income of individuals or businesses . Various income tax systems exist, with varying degrees of tax incidence. Income taxation can be progressive, proportional, or regressive. When the tax is levied on the income of companies, it is often called a corporate...
, which is between 16 and 20 percent, and they provide two thirds of public services
Public services
Public services is a term usually used to mean services provided by government to its citizens, either directly or by financing private provision of services. The term is associated with a social consensus that certain services should be available to all, regardless of income...
. Municipalities control many community services, such as schools, health care and the water supply, and local streets. They do not maintain highways, set laws or keep police forces — these tasks are the responsibility of the central government.

Municipalities have council-manager government
Council-manager government
The council–manager government form is one of two predominant forms of municipal government in the United States; the other common form of local government is the mayor-council government form, which characteristically occurs in large cities...
, i.e. they are governed by an elected council , which is legally autonomous and answers only to the voters. The size of the council is proportional to the population, the extremes being 9 in Sottunga
Sottunga
Sottunga is an island municipality of Åland, an autonomous territory of Finland. The municipality is the smallest when it comes to population in Åland and in Finland, with a population of only and covers an area of ofwhich...
and 85 in Helsinki
Helsinki
Helsinki is the capital and largest city in Finland. It is in the region of Uusimaa, located in southern Finland, on the shore of the Gulf of Finland, an arm of the Baltic Sea. The population of the city of Helsinki is , making it by far the most populous municipality in Finland. Helsinki is...
. Municipal managers are civil servants named by the council. The city manager of Helsinki is called / "Lord Mayor" for historical reasons.

There were previously no mayors in Finland, but after a change in law, Tampere
Tampere
Tampere is a city in southern Finland. It is the most populous inland city in any of the Nordic countries. The city has a population of , growing to approximately 300,000 people in the conurbation and over 340,000 in the metropolitan area. Tampere is the third most-populous municipality in...
was first city to elect a mayor (/) in 2007. The mayor is not, however, currently elected directly, but by the municipal council. The mayor acts as municipal manager and as a speaker
Speaker (politics)
The term speaker is a title often given to the presiding officer of a deliberative assembly, especially a legislative body. The speaker's official role is to moderate debate, make rulings on procedure, announce the results of votes, and the like. The speaker decides who may speak and has the...
of municipal council.

The municipal tax is a flat income tax that is levied on lower income levels than state taxes, which in contrast are progressive tax
Progressive tax
A progressive tax is a tax by which the tax rate increases as the taxable base amount increases. "Progressive" describes a distribution effect on income or expenditure, referring to the way the rate progresses from low to high, where the average tax rate is less than the marginal tax rate...
es. The lowest tax of 16% is found in Kauniainen
Kauniainen
Kauniainen is a small town and a municipality of inhabitants in the Helsinki Metropolitan Area, Finland. It is surrounded by the city of Espoo, in Greater Helsinki...
, while a 20% tax is in the another extreme. Municipalities also receive funding directly from the state . Municipalities levy a property tax on property, which is comparatively low. It is higher for summer cottages or other property intended for leisure. Corporate tax called , "community tax", is also a source of income. Some functions are funded both by the municipality and the state, e.g. AMK
Ammattikorkeakoulu
An ammattikorkeakoulu , abbreviated amk, is a Finnish institution of higher education.- Significance :...
schools.

The municipal tax, although in principle a flat tax
Flat tax
A flat tax is a tax system with a constant marginal tax rate. Typically the term flat tax is applied in the context of an individual or corporate income that will be taxed at one marginal rate...
, is affected by deductions, such that the real average tax percentage is lower than the nominal rate. Municipal taxes are collected by the state (Verohallinto) and paid to the municipalities.

The areas of the municipalities vary, as the population is the primary criterion for forming a municipality. The largest are found in Lapland, of which the largest is Inari
Inari, Finland
Inari is Finland's largest, sparsely populated municipality with four official languages, more than any other in the country. Its major sources of income are lumber industry and nature maintenance. With the museum Siida in the village of Inari, it is a center of Sami culture...
at  km² (130 km square). The smallest municipalities are very small towns. Kaskinen
Kaskinen
Kaskinen is a town and municipality of Finland. It is located in the province of Western Finland and is part of the Ostrobothnia region. The population of Kaskinen is and the municipality covers an area of of which is inland water . The population density is...
is an independent town with the land area of only 10.49 km². Kauniainen
Kauniainen
Kauniainen is a small town and a municipality of inhabitants in the Helsinki Metropolitan Area, Finland. It is surrounded by the city of Espoo, in Greater Helsinki...
, which was originally a corporation
Corporation
A corporation is created under the laws of a state as a separate legal entity that has privileges and liabilities that are distinct from those of its members. There are many different forms of corporations, most of which are used to conduct business. Early corporations were established by charter...
in Espoo
Espoo
Espoo is the second largest city and municipality in Finland. The population of the city of Espoo is . It is part of the Helsinki Metropolitan Area along with the cities of Helsinki, Vantaa, and Kauniainen. Espoo shares its eastern border with Helsinki and Vantaa, while enclosing Kauniainen....
, is only  km².

Each municipality has a distinct coat of arms
Coat of arms
A coat of arms is a unique heraldic design on a shield or escutcheon or on a surcoat or tabard used to cover and protect armour and to identify the wearer. Thus the term is often stated as "coat-armour", because it was anciently displayed on the front of a coat of cloth...
. It is posted to the borders and shown in official documents advertising the municipality. Also, municipalities may have a logo
Logo
A logo is a graphic mark or emblem commonly used by commercial enterprises, organizations and even individuals to aid and promote instant public recognition...
distinct from a coat of arms.

Distinctively, the capital area, or Greater Helsinki
Greater Helsinki
Greater Helsinki and the smaller Helsinki Metropolitan Area or Capital Region refer to two regions of different size surrounding Helsinki, the capital of Finland...
, has no special arrangements. The area consists of four entirely independent cities that form a continuous conurbation
Conurbation
A conurbation is a region comprising a number of cities, large towns, and other urban areas that, through population growth and physical expansion, have merged to form one continuous urban and industrially developed area...
. Greater Helsinki has grown in population and area relatively quickly: the nearby municipalities, considered rural only 50 years ago, have become suburbs, and the growth is projected to continue. A state-imposed merger of Helsinki and a part of Sipoo
Sipoo
Sipoo is a municipality of Finland. Its seat is in Nikkilä/Nickby.It is the eastern neighbour of Helsinki and is located in the Uusimaa region. The municipality has a population of and covers an area of ofwhich is water...
, a rural, 40% Swedish-speaking municipality adjacent to Greater Helsinki, was recently approved by the government, counter to the opinion of the Sipoo municipal council. This area will effectively become a new (and Finnish-speaking) suburb with multiple times the inhabitants than there are in Sipoo.

There is currently a heated political debate in Finland about reforming the municipality system. Essentially, a large number of small municipalities is seen as detrimental to the provision of public services, having been originated from a time when horses and carriages were used from transport, and there have been suggestions of state-imposed mergers. A committee led by Minister for Regional and Municipal Affairs Hannes Manninen
Hannes Manninen
Hannes Manninen is a Finnish politician of the Centre Party. He has been a member of the Parliament of Finland since 1995 and Minister of Regional and Municipal Affairs of Finland 2003-2007.-References:...
(since April 2007 the post is held by Mari Kiviniemi) has suggested creating a two-tier system of municipalities with different powers, while the Association of Finnish Local and Regional Authorities favours a system where municipalities would be units of at least 20,000–30,000 inhabitants, cf. the current median at 4,700. The motion has been inspired by a similar reform in Denmark
Denmark
Denmark is a Scandinavian country in Northern Europe. The countries of Denmark and Greenland, as well as the Faroe Islands, constitute the Kingdom of Denmark . It is the southernmost of the Nordic countries, southwest of Sweden and south of Norway, and bordered to the south by Germany. Denmark...
(see Municipalities of Denmark
Municipalities of Denmark
This is a list of Municipalities of Denmark.-Region Hovedstaden:* Albertslund Municipality* Allerød Municipality* Ballerup Municipality* Bornholm Regional Municipality* Brøndby Municipality* Copenhagen Municipality* Dragør Municipality* Egedal Municipality...
). Former government (Vanhanen II
Matti Vanhanen's second cabinet
Matti Vanhanen's second cabinet was the 70th cabinet of Finland. The cabinet was a centre-right/green coalition, consisting of four parties: the Centre Party Matti Vanhanen's second cabinet (April 2007 - June 2010 ) was the 70th cabinet of Finland. The cabinet was a centre-right/green coalition,...
), however, planned to not impose mergers. 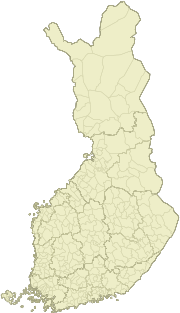