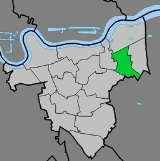 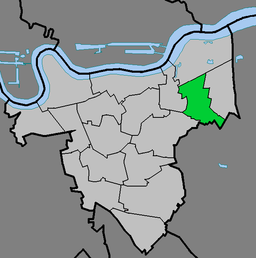 Plumstead is a district of south
South London
South London is the southern part of London, England, United Kingdom.According to the 2011 official Boundary Commission for England definition, South London includes the London boroughs of Bexley, Bromley, Croydon, Greenwich, Kingston, Lambeth, Lewisham, Merton, Southwark, Sutton and...
London
London
London is the capital city of :England and the :United Kingdom, the largest metropolitan area in the United Kingdom, and the largest urban zone in the European Union by most measures. Located on the River Thames, London has been a major settlement for two millennia, its history going back to its...
, England, located in the London Borough of Greenwich
London Borough of Greenwich
The London Borough of Greenwich is an Inner London borough in south-east London, England. Taking its name from the historic town of Greenwich, the present borough was formed in 1965 by the amalgamation of the former area of the Metropolitan Borough of Greenwich with part of the Metropolitan...
. Plumstead is a multi cultural area with large Asian and Afro-Caribbean communities, in similarity to local areas such as Woolwich and Thamesmead. Plumstead is the location for a large bus garage built in 1981 on former industrial land and a more recent landmark is the Greenwich Islamic Centre, located on Plumstead Road which has been extant for about 20 years and is currently undergoing a major enlargement.

After the Battle of Hastings
Battle of Hastings
The Battle of Hastings occurred on 14 October 1066 during the Norman conquest of England, between the Norman-French army of Duke William II of Normandy and the English army under King Harold II...
in 1066, William the Conqueror gifted Plumstead to his half-brother Odo, Bishop of Bayeux whom he also titled Earl of Kent
Earl of Kent
The peerage title Earl of Kent has been created eight times in the Peerage of England and once in the Peerage of the United Kingdom.See also Kingdom of Kent, Duke of Kent.-Earls of Kent, first creation :*Godwin, Earl of Wessex...
. The Archbishop of Canterbury
Archbishop of Canterbury
The Archbishop of Canterbury is the senior bishop and principal leader of the Church of England, the symbolic head of the worldwide Anglican Communion, and the diocesan bishop of the Diocese of Canterbury. In his role as head of the Anglican Communion, the archbishop leads the third largest group...
Lanfranc of Pavia and the Norman
Normans
The Normans were the people who gave their name to Normandy, a region in northern France. They were descended from Norse Viking conquerors of the territory and the native population of Frankish and Gallo-Roman stock...
abbot of St Austin's successfully interceded to reclaim a portion of the land on behalf of the monastery. In 1074 Odo then granted by deed the remainder of the parish and also the right of the abbot to be "Chief Lord of the Fee".

However, the Domesday book
Domesday Book
Domesday Book , now held at The National Archives, Kew, Richmond upon Thames in South West London, is the record of the great survey of much of England and parts of Wales completed in 1086...
of 1080 holds the details of Plumstead as two separate entries. Under the title of the land of the church of St. Augustine
Augustine of Canterbury
Augustine of Canterbury was a Benedictine monk who became the first Archbishop of Canterbury in the year 597...
it reads


"In Litelai hundred. The abbot of St. Augustine has 1 manor, named Plumstede, which was taxed at 2 sulings and 1 yoke. The arable lands is ... In demesne there is 1 carucate and 17 villeins, with 6 cottagers, having 6 carucates, there is wood for the pannage of 5 hogs. In the time of king Edward the Confessor, and afterwards it was worth 10 pounds, now 12 pounds, and yet it pays 14 pounds and 8 shillings and 3 pence."

while under the general title of the Bishop of Baieux's lands


"The abbot of St. Augustine holds of the bishop of Baieux, Plumsted. It was taxed at 2 sulings and 1 yoke. The arable land is 5 carucates. In demesne there is 1 carucate and 17 villeins, with 3 boarderers, having 4 carucates. There is wood for the pannage of 5 hogs. In the time of king Edward the Confessor it was worth 10 pounds, when he received it 8 pounds, and now as much, and yet he who holds it pays 12 pounds. Brixi Cilt held it of king Edward."

Around this time Reginald, son of Gervase de Cornhill, released to the abbot and convent all claims in this manor from David and Robert de Cornhill who had rented it from them.

By 1273 Nicholas de Spina was elected abbot of the monastery and by the following year he was receiving eleven pounds from Plumstead residents.

Lora de Ros, lady of Horton, gave her right to two carucates of land and 50 acres (202,343 m²) of woods in Plumstead to the abbot, Thomas, in return for the rights of her and her heirs to partake of prayers performed in the church during 1287. It appears that Robert, the last abbot but one, had recovered a share of this land from her ancestor, Richard de Ros. It was found by a jury of grand assizes that his ancestors held this land in tenancy from the abbot and convent at a rent of twelve pound per annum.

For reasons that remain unclear, King Edward III exempted the men and tenants of the manor of Plumstead from providing four men from the borough for the sheriff
Sheriff
A sheriff is in principle a legal official with responsibility for a county. In practice, the specific combination of legal, political, and ceremonial duties of a sheriff varies greatly from country to country....
as was the requirement elsewhere. A writ to Roger de Reynham, Sheriff of Kent in 1332 directed and commanded him that the residents of Plumstead should be allowed to send one man only. By 1363 Edward also decreed to the monastery in his charter of infpeximus that he released all manors and possessions given to it by former kings, including William the Conqueror. He also confirmed all the grants of liberties previously bestowed on the abbot and monastery.

By the time of Richard II of England
Richard II of England
Richard II was King of England, a member of the House of Plantagenet and the last of its main-line kings. He ruled from 1377 until he was deposed in 1399. Richard was a son of Edward, the Black Prince, and was born during the reign of his grandfather, Edward III...
the taxes from Plumstead were valued at 69 pounds, 10 shillings and sixpence, and Henry VI of England
Henry VI of England
Henry VI was King of England from 1422 to 1461 and again from 1470 to 1471, and disputed King of France from 1422 to 1453. Until 1437, his realm was governed by regents. Contemporaneous accounts described him as peaceful and pious, not suited for the violent dynastic civil wars, known as the Wars...
reconfirmed the liberties and rights of the monastery.

Plumstead manor, together with the church of Plumstead and the chapel of Wickham annexed to it remained part of the possessions of the monastery until its final dissolution in 1539, the 30th year of the reign of Henry VIII
Henry VIII of England
Henry VIII was King of England from 21 April 1509 until his death. He was Lord, and later King, of Ireland, as well as continuing the nominal claim by the English monarchs to the Kingdom of France...
, when the abbey and all its revenues were surrendered into the King's hands by the then abbot, John Essex and its thirty members.

Plumstead expanded rapidly in the 1880s with housing developed for workers at the Royal Arsenal
Royal Arsenal
The Royal Arsenal, Woolwich, originally known as the Woolwich Warren, carried out armaments manufacture, ammunition proofing and explosives research for the British armed forces. It was sited on the south bank of the River Thames in Woolwich in south-east London, England.-Early history:The Warren...
; two-up two-down terraced housing was common in the area close to the river and the Arsenal, whereas larger and smarter properties were developed uphill from the Thames, around Plumstead Common.

Plumstead was also the home of the Peculiar People
Peculiar People
For the book by Rodney Clapp see: A Peculiar People."The Peculiar People", is also a Quaker novel by Jan de Hartog.The Peculiar People were originally an offshoot of the Wesleyan denomination, founded in 1838 in Rochford, Essex, by John Banyard, a farm worker's son born in 1800...
and a fascinating account of this Protestant sect is recorded in 'Unorthodox London' by the journalist Dr Davis. Being near to the military town of Woolwich there have never been any Quaker meeting houses but the Plymouth Brethren
Plymouth Brethren
The Plymouth Brethren is a conservative, Evangelical Christian movement, whose history can be traced to Dublin, Ireland, in the late 1820s. Although the group is notable for not taking any official "church name" to itself, and not having an official clergy or liturgy, the title "The Brethren," is...
have had numerous meeting rooms in the area since about 1845. The present Brethren meeting places are at Plum Lane (1865), Willenhall Road (ca 1910) and Brewery Road (Richmond Gospel Hall).

Arsenal Football Club
Arsenal F.C.
Arsenal Football Club is a professional English Premier League football club based in North London. One of the most successful clubs in English football, it has won 13 First Division and Premier League titles and 10 FA Cups...
(then known as Royal Arsenal or Woolwich Arsenal) played in Plumstead between 1886 and 1913, at various grounds in the Plumstead area, but mainly at the Manor Ground
Manor Ground, Plumstead
The Manor Ground in Plumstead, south east London was a football stadium which, between 1888 & 1890, and 1893 & 1913, was the home of the football club formerly known as Royal Arsenal, renamed Woolwich Arsenal in 1893, and later simply Arsenal F.C...
, on the north side of Plumstead High Street and the Invicta Ground
Invicta Ground
The Invicta Ground was a football stadium in Plumstead, south-east London, that was the home of Royal Arsenal between 1890 and 1893....
, where the Royal Ordnance Factories F.C.
Royal Ordnance Factories F.C.
Royal Ordnance Factories Football Club were a football club from south east London, England,that existed in the late 19th century.In 1893, the former workers' team at the Royal Arsenal in Woolwich, Woolwich Arsenal FC, was by now a professional side and had joined the Football League...
also played.

When Crossrail
Crossrail
Crossrail is a project to build a major new railway link under central London. The name refers to the first of two routes which are the responsibility of Crossrail Ltd. It is based on an entirely new east-west tunnel with a central section from to Liverpool Street station...
is built the rail line will drop below the surface and continue north and west under Woolwich to begin its journey under the river Thames in a way that serves the Isle of Dogs and the ExCeL exhibition centre, then the railway's tracks are likely to emerge from a tunnel beneath the River Thames
River Thames
The River Thames flows through southern England. It is the longest river entirely in England and the second longest in the United Kingdom. While it is best known because its lower reaches flow through central London, the river flows alongside several other towns and cities, including Oxford,...
at Plumstead sidings. This would permit a choice of an eastern terminus at Abbey Wood Station.

Notable people from Plumstead include: