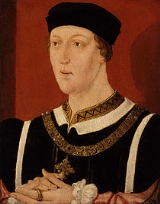 Overview
Henry VI was King of England
Kingdom of England
The Kingdom of England was, from 927 to 1707, a sovereign state to the northwest of continental Europe. At its height, the Kingdom of England spanned the southern two-thirds of the island of Great Britain and several smaller outlying islands; what today comprises the legal jurisdiction of England...
from 1422 to 1461 and again from 1470 to 1471, and disputed King of France from 1422 to 1453. Until 1437, his realm was governed by regent
Regent
A regent, from the Latin regens "one who reigns", is a person selected to act as head of state because the ruler is a minor, not present, or debilitated. Currently there are only two ruling Regencies in the world, sovereign Liechtenstein and the Malaysian constitutive state of Terengganu...
s. Contemporaneous accounts described him as peaceful and pious, not suited for the violent dynastic civil wars, known as the Wars of the Roses
Wars of the Roses
The Wars of the Roses were a series of dynastic civil wars for the throne of England fought between supporters of two rival branches of the royal House of Plantagenet: the houses of Lancaster and York...
, which were to commence during his reign. His periods of insanity and his inherent benevolence eventually required his wife, Margaret of Anjou
Margaret of Anjou
Margaret of Anjou was the wife of King Henry VI of England. As such, she was Queen consort of England from 1445 to 1461 and again from 1470 to 1471; and Queen consort of France from 1445 to 1453...
, to assume control of his kingdom, which contributed to his own downfall, the collapse of the House of Lancaster
House of Lancaster
The House of Lancaster was a branch of the royal House of Plantagenet. It was one of the opposing factions involved in the Wars of the Roses, an intermittent civil war which affected England and Wales during the 15th century...
, and the rise of the House of York
House of York
The House of York was a branch of the English royal House of Plantagenet, three members of which became English kings in the late 15th century. The House of York was descended in the paternal line from Edmund of Langley, 1st Duke of York, the fourth surviving son of Edward III, but also represented...
.
Henry was the only child and heir of King Henry V of England
Henry V of England
Henry V was King of England from 1413 until his death at the age of 35 in 1422. He was the second monarch belonging to the House of Lancaster....
.

1431    Henry VI of England is crowned King of France at Notre Dame in Paris.

1455    Wars of the Roses: at the First Battle of St Albans, Richard, Duke of York, defeats and captures King Henry VI of England.

1461    Wars of the Roses in England: Lancastrian King Henry VI is deposed by his Yorkist cousin, who then becomes King Edward IV.

1470    Henry VI of England returns to the English throne after Earl of Warwick defeats the Yorkists in battle.