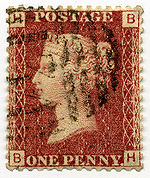 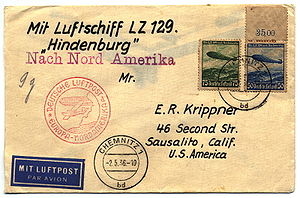 Philately is the study of stamps
Postage stamp
A postage stamp is a small piece of paper that is purchased and displayed on an item of mail as evidence of payment of postage. Typically, stamps are made from special paper, with a national designation and denomination on the face, and a gum adhesive on the reverse side...
and postal history
Postal history
Postal history is the study of postal systems and how they operate and, or, the study of postage stamps and covers and associated material illustrating historical episodes of postal systems...
and other related items. Philately involves more than just stamp collecting
Stamp collecting
Stamp collecting is the collecting of postage stamps and related objects. It is one of the world's most popular hobbies, with the number of collectors in the United States alone estimated to be over 20 million.- Collecting :...
, which does not necessarily involve the study of stamps. It is possible to be a philatelist without owning any stamps. For instance, the stamps being studied may be very rare, or exist only in museums.


Origins of the word

The word "philately" is the English version of the French word "philatélie", coined by Georges Herpin in 1864. Herpin stated that stamps had been collected and studied for the previous six or seven years and a better name was required for the new hobby than timbromanie, which was disliked. He took the Greek root word phil or philo, meaning an attraction or affinity for something, and ateleia, meaning "exempt from duties and taxes" to form "philatelie". The introduction of postage stamps meant that the receipt of letters was now free of charge, whereas before stamps it was normal for postal charges to be paid by the recipient of a letter.

The alternative terms "timbromania", "timbrophily" and "timbrology" gradually fell out of use as philately gained acceptance during the 1860s.

The origins of philately lie in the observation that in a number of apparently similar stamps, closer examination may reveal differences in the printed design, paper, watermark
Watermark
A watermark is a recognizable image or pattern in paper that appears as various shades of lightness/darkness when viewed by transmitted light , caused by thickness or density variations in the paper...
, colour, perforations and other areas of the stamp. Comparison with the records of postal authorities may or may not show that the variations were intentional, which leads to further inquiry as to how the changes could have happened, and why. To make things more interesting, thousands of forgeries have been produced over the years, some of them very good, and only a thorough knowledge of philately gives any hope of detecting the fakes.

Traditional philately is the study of the technical aspects of stamp production and stamp identification, including:

Thematic philately
Topical stamp collecting
Topical or thematic stamp collecting is the collecting of postage stamps relating to a particular subject or concept. Topics can be almost anything, from stamps on stamps, birds on stamps, to famous physicians, to the history of England.- Background :...
, also known as topical philately, is the study of what is depicted on the stamps. There are hundreds of popular subjects, such as birds on stamps, and ships, poets, presidents, monarchs, maps, aircraft, space craft, sports and insects on stamps. Interesting aspects of topical philately include design mistakes and alterations, for instance, the recent editing out of cigarettes from the pictures used for United States stamps, and the stories of how particular images came to be used.

Postal history
Postal history
Postal history is the study of postal systems and how they operate and, or, the study of postage stamps and covers and associated material illustrating historical episodes of postal systems...
concentrates on the use of stamps on mail. It includes the study of postmark
Postmark
thumb|USS TexasA postmark is a postal marking made on a letter, package, postcard or the like indicating the date and time that the item was delivered into the care of the postal service...
s, post office
Post office
A post office is a facility forming part of a postal system for the posting, receipt, sorting, handling, transmission or delivery of mail.Post offices offer mail-related services such as post office boxes, postage and packaging supplies...
s, postal authorities, postal rates and regulations and the process by which letters are moved from sender to recipient, including routes and choice of conveyance. A classic example is the Pony Express
Pony Express
The Pony Express was a fast mail service crossing the Great Plains, the Rocky Mountains, and the High Sierra from St. Joseph, Missouri, to Sacramento, California, from April 3, 1860 to October 1861...
, which was the fastest way to send letters across the United States during the few months that it operated. Covers
Cover (philately)
In philately, the term cover pertains to the outside of an envelope or package with an address, typically with postage stamps that have been cancelled and is a term generally used among stamp and postal history collectors. The term does not include the contents of the letter or package, although...
that can be proved to have been sent by the Pony Express are highly prized by collectors.

Cinderella philately
Cinderella stamp
In philately, a cinderella stamp has been defined as "Virtually anything resembling a postage stamp, but not issued for postal purposes by a government postal administration..." The term also excludes imprinted stamps on postal stationery.- Types :...
is the study of objects that look like stamps, but aren't postal stamps. Examples include Easter Seals
Easter seals (philately)
An Easter Seal is a form of charity label issued to raise funds for charitable purposes.It is applied to the front of mail to show support for particular charitable causes....
, Christmas Seal
Christmas Seal
Christmas Seals are labels placed on mail during the Christmas season to raise funds and awareness for charitable programs.They have become particularly associated with lung diseases such as tuberculosis, and with child welfare...
s, propaganda labels, and so forth.

Maximaphily
Maximaphily
Maximaphily is a branch of philately involving the study and creation of maximum cards. It is one of eleven classifications of philately recognised by the Fédération Internationale de Philatélie and therefore has its own FIP Commission....
is the study of Maximum Cards. Maximum Cards can be defined as a picture post card with postage stamp on the same theme and a cancellation, with a maximum concordance between all three.

Philately uses a number of tools, including stamp tongs
Stamp tongs
Stamp tongs are tweezers used to handle postage stamps. They are used by stamp collectors and philatelists, because they are a reliable way to hold and move stamps without damaging or getting skin oils on them. The jaws of stamp tongs are smooth in contrast to the striated jaws of the type of...
(a specialised form of tweezers) to safely handle the stamps, a strong magnifying glass and a perforation gauge (odontometre) to measure the perforation gauge of the stamp.

The identification of watermark
Watermark
A watermark is a recognizable image or pattern in paper that appears as various shades of lightness/darkness when viewed by transmitted light , caused by thickness or density variations in the paper...
s is important and may be done with the naked eye by turning the stamp over or holding it up to the light. If this fails then watermark fluid may be used, which "wets" the stamp to reveal the mark.

Other common tools include stamp catalogues, stamp stockbooks and stamp hinge
Stamp hinge
In philately stamp hinges or mounts are small, folded, transparent, rectangular pieces of paper coated with a mild gum. They are used by stamp collectors to affix postage stamps onto the pages of a stamp album.- Use :...
s.

Philatelic organisations sprang up soon after people started collecting and studying stamps. They include local, national and international clubs and societies where collectors come together to share their hobby.