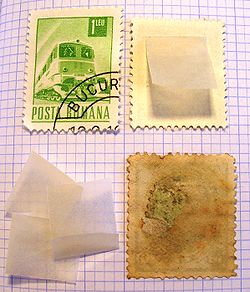 In philately
Philately
Philately is the study of stamps and postal history and other related items. Philately involves more than just stamp collecting, which does not necessarily involve the study of stamps. It is possible to be a philatelist without owning any stamps...
stamp hinges or mounts are small, folded, transparent, rectangular pieces of paper coated with a mild gum. They are used by stamp collectors to affix postage stamp
Postage stamp
A postage stamp is a small piece of paper that is purchased and displayed on an item of mail as evidence of payment of postage. Typically, stamps are made from special paper, with a national designation and denomination on the face, and a gum adhesive on the reverse side...
s onto the pages of a stamp album
Stamp album
A stamp album is a book, often loose-leafed , in which a collection of postage stamps may be stored and displayed.- Overview :...
.

The short end is moistened and affixed to the stamp, the long end is likewise affixed to the page. The hinge keeps the stamp on the page while still allowing it to be lifted to examine the back, for instance to see the watermark
Watermark
A watermark is a recognizable image or pattern in paper that appears as various shades of lightness/darkness when viewed by transmitted light , caused by thickness or density variations in the paper...
or expert marks
Philatelic expertisation
Philatelic expertisation is the process whereby an expert is asked to give an opinion whether a philatelic item is genuine and whether it has been repaired or altered in any way....
.

The best stamp hinges are also designed to be "peelable", meaning that the stamp may be removed from the page, and the hinge from the stamp, without any damage to either. Not all makes of hinge have this property, and the backs of many stamps have "hinge remnants", where the hinge has torn away rather than letting go of the stamp. This is especially common for mint stamps, where the stamp's own gum adheres tightly to the hinge. Some old stamps may actually have multiple hinge remnants layered on top of each other. Conversely, careless removal of a hinge may take away a layer of the stamp's paper, resulting in a type of stamp thin known as a hinge thin. The thinner paper will be noticeable when the stamp is held up to the light and is considered a serious fault in a stamp.

Even with the use of peelable hinges and care taken to minimize the moisture used, the hinge will leave a visible disturbance in the gum of an unused stamp. While this was formerly a matter of indifference, since about the middle of the 20th century many collectors have come to prefer "unhinged stamps" showing no trace of hinging. In some cases, the price differential is 2-to-1 or more, resulting in the quip that the "gum on the back of a stamp is the most valuable substance in the world". Collectors preferring unhinged stamps typically use pocket-like or sleeve-like hingeless mount. Nevertheless, stamp hinges remain popular as a mounting method.

Since the time that unhinged stamps became popular, considerable numbers of old stamps with intact gum have appeared on the market, raising suspicion that many of these have been regummed.
The source of this article is wikipedia, the free encyclopedia.  The text of this article is licensed under the GFDL.