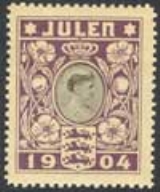 Encyclopedia
Christmas Seals are labels placed on mail
Mail
Mail, or post, is a system for transporting letters and other tangible objects: written documents, typically enclosed in envelopes, and also small packages are delivered to destinations around the world. Anything sent through the postal system is called mail or post.In principle, a postal service...
during the Christmas
Christmas
Christmas or Christmas Day is an annual holiday generally celebrated on December 25 by billions of people around the world. It is a Christian feast that commemorates the birth of Jesus Christ, liturgically closing the Advent season and initiating the season of Christmastide, which lasts twelve days...
season to raise funds and awareness for charitable programs.They have become particularly associated with lung diseases such as tuberculosis
Tuberculosis
Tuberculosis, MTB, or TB is a common, and in many cases lethal, infectious disease caused by various strains of mycobacteria, usually Mycobacterium tuberculosis. Tuberculosis usually attacks the lungs but can also affect other parts of the body...
, and with child welfare. Christmas seals are regarded as a form of cinderella stamp
Cinderella stamp
In philately, a cinderella stamp has been defined as "Virtually anything resembling a postage stamp, but not issued for postal purposes by a government postal administration..." The term also excludes imprinted stamps on postal stationery.- Types :...
.

At the beginning of the 1900s tuberculosis was a greatly feared disease, and its harmful effects on children seemed particularly cruel.
In 1903, Einar Holbøll, a Danish
Denmark
Denmark is a Scandinavian country in Northern Europe. The countries of Denmark and Greenland, as well as the Faroe Islands, constitute the Kingdom of Denmark . It is the southernmost of the Nordic countries, southwest of Sweden and south of Norway, and bordered to the south by Germany. Denmark...
postal clerk developed the idea of adding an extra charitable stamp on mailed holiday greetings during Christmas. The money raised could be used to help children sick with tuberculosis. The plan was approved by the Postmaste r and the King of Denmark (Christian IX
Christian IX of Denmark
Christian IX was King of Denmark from 16 November 1863 to 29 January 1906.Growing up as a prince of Schleswig-Holstein-Sonderburg-Glücksburg, a junior branch of the House of Oldenburg which had ruled Denmark since 1448, Christian was originally not in the immediate line of succession to the Danish...
).

During the first six years, enough funds were raised to build the Christmas Seal Sanatorium in Kolding
Kolding
Kolding is a Danish seaport located at the head of Kolding Fjord in Region of Southern Denmark . It is the site of the council Kolding Municipality. It is a transportation, commercial, and manufacturing centre, and has numerous industrial companies, principally geared towards shipbuilding...
, which was opened in 1911.
The same year the sanatorium was transferred to the administration of the Danish National Association to Combat Tuberculosis as it was considered a waste of resources to have two organisations working towards the same purpose.
The Danish Christmas Seal Committee – today known as Julemærkefonden (the Christmas Seal Fund) - decided at that time to put all future collected funds to use in building and operating convalescent homes for children.

Soon after Denmark issued the first Christmas seal, Sweden and Iceland followed. Seals then spread throughout Scandinavia and are still popular today. They have also been issued by Greenland, Norway, Finland, The Danish West Indies, The Virgin Islands, Estonia and The Faroe Islands.

Christmas seals in the United States

They were introduced to the United States
United States
The United States of America is a federal constitutional republic comprising fifty states and a federal district...
by Emily Bissell
Emily Bissell
Emily Perkins Bissell was an American social worker and activist, best remembered for introducing Christmas Seals to the United States....
in 1907, after she had read about the program in an article by Danish-born Jacob Riis
Jacob Riis
Jacob August Riis was a Danish American social reformer, "muckraking" journalist and social documentary photographer. He is known for using his photographic and journalistic talents to help the impoverished in New York City; those impoverished New Yorkers were the subject of most of his prolific...
, a muckraking
Muckraker
The term muckraker is closely associated with reform-oriented journalists who wrote largely for popular magazines, continued a tradition of investigative journalism reporting, and emerged in the United States after 1900 and continued to be influential until World War I, when through a combination...
journalist and photographer. Bissell hoped to raise money for a sanitarium
Sanatorium
A sanatorium is a medical facility for long-term illness, most typically associated with treatment of tuberculosis before antibiotics...
on the Brandywine Creek in Delaware
Delaware
Delaware is a U.S. state located on the Atlantic Coast in the Mid-Atlantic region of the United States. It is bordered to the south and west by Maryland, and to the north by Pennsylvania...
.

It grew to a national program in 1908 by the National Association for the Study and Prevention of Tuberculosis (NASPT) and the American National Red Cross. The seals were sold at post offices, initially in Delaware at 1 cent each. Net proceeds from the sales would be divided equally between the two organizations. By 1920, the Red Cross withdrew from the arrangement and sales were conducted exclusively by the NASPT, then known as the National Tuberculosis Association (NTA). Various promotional schemes were tried: in 1954 the small town of Saranac Lake, New York
Saranac Lake, New York
Saranac Lake is a village located in the state of New York, United States. As of the 2010 census, the population was 5,406. The village is named after Upper, Middle, and Lower Saranac Lakes, which are nearby....
(home of the Adirondack Cottage Sanitarium
Adirondack Cottage Sanitarium
The Adirondack Cottage Sanitarium was a tuberculosis sanatorium established in Saranac Lake, New York in 1885 by Dr. Edward Livingston Trudeau. After Trudeau's death in 1915, the institution's name was changed to the Trudeau Sanatorium, following changes in conventional usage...
) won a nationwide competition selling Christmas Seals, the reward for which was hosting the world premiere of the Paul Newman
Paul Newman
Paul Leonard Newman was an American actor, film director, entrepreneur, humanitarian, professional racing driver and auto racing enthusiast...
film, The Silver Chalice
The Silver Chalice (film)
The Silver Chalice is a 1954 historical epic film from Warner Bros., based on Thomas B. Costain's 1952 novel of the same name.-Plot:A Greek artisan is commissioned to cast the cup of Christ in silver and sculpt around its rim the faces of the disciples and Jesus himself. He travels to Jerusalem and...
; the cast participated in a parade in the town's annual winter carnival
Winter carnival
A Winter carnival is an outdoor celebration that occurs in wintertime.Winter carnivals, or festivals, are popular in places where winter is particularly long or severe, such as Scandinavia, Canada and the northern United States...
.

After World War II
World War II
World War II, or the Second World War , was a global conflict lasting from 1939 to 1945, involving most of the world's nations—including all of the great powers—eventually forming two opposing military alliances: the Allies and the Axis...
with the development of the antibiotic streptomycin
Streptomycin
Streptomycin is an antibiotic drug, the first of a class of drugs called aminoglycosides to be discovered, and was the first antibiotic remedy for tuberculosis. It is derived from the actinobacterium Streptomyces griseus. Streptomycin is a bactericidal antibiotic. Streptomycin cannot be given...
TB became a curable disease, although it would be decades before it could be considered under control in developed countries. To reflect the expanding scope of the organization's goals, the name was changed to the National Tuberculosis and Respiratory Disease Association in the late 1960s. The NTRDA became the American Lung Association
American Lung Association
The American Lung Association is a voluntary health organization whose mission is to save lives by improving lung health and preventing lung disease.-History:...
in 1973, though the 1974 seals continue to show the NTRDA inscription on the sheet margin.

By 1908, the campaign had reached Canada. Interested people in Toronto and Hamilton began Christmas Seal campaigns to build and support sanatoria, as TB hospitals were called back then.

The old Toronto Globe came promptly to their aid. Early in December, the Globe began running a daily story on the front page giving news of the campaign. The column was bordered by holly so that readers could easily spot it.

One story told how the children of 58 Toronto schools had sold 10,000 Christmas Seals. Another issue announced that out on the Prairies a new paper called the Regina Leader, had written to say its staff would sell the seals and send the money back for the sanatorium being built at Muskoka.

From Saint John, N.B. the Rev. G. A. Moore wrote to say that he and other volunteers would sell 8,500 and send the money to Toronto for the sanatorium.

That first year, the Toronto campaign brought in $6,114.25 and Hamilton citizens gave $1,244.40.
Year by year, other cities across Canada tried the Christmas Seal campaign as a means not only of raising money but of creating the awareness that tuberculosis could be controlled.

Finally, in 1927, it was agreed that the Christmas Seal campaign was to be the official method for tuberculosis associations to appeal to the public for funds. A national seal was established.

At first, the money raised was used for the new and badly needed sanatoria. When these were established, Christmas Seal funds were used for TB prevention. The seals have paid for millions of Canadians to have chest X-ray or tuberculin tests. As a result, thousands of TB cases were discovered before disease spread to others.

Christmas Seals symbolize the grassroots support of Canadians that helped win the fight against TB.

Anyone can issue a seal at Christmas time. Between 1937 and 1943 the Danish Nazi Party (DNSAP) issued a variety of seals featuring the Nazi swastika
Swastika
The swastika is an equilateral cross with its arms bent at right angles, in either right-facing form in counter clock motion or its mirrored left-facing form in clock motion. Earliest archaeological evidence of swastika-shaped ornaments dates back to the Indus Valley Civilization of Ancient...
. These scarce historic seals contain Christmas themes like holly, but had no known connection to the fight against TB. One can only speculate how the Nazis spent the funds raised from the sale of these seals. Many other charitable funds were issued at Christmas time, often with Christmas themes, by religious organizations, civic & fraternal societies, patriotic organizations, sororities, etc. These seals are of related interest to Christmas Seal collectors, but are not "Christmas Seals" by the strict definition of the term unless they fought TB in their origin, and later, lung diseases such as asthma and emphysema.