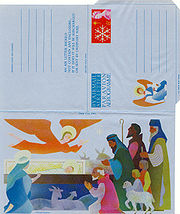 An Aerogram, Aérogramme or Air Letter is a thin lightweight piece of foldable and gummed paper for writing a letter for transit via airmail
Airmail
Airmail is mail that is transported by aircraft. It typically arrives more quickly than surface mail, and usually costs more to send...
, in which the letter and envelope
Envelope
An envelope is a common packaging item, usually made of thin flat material. It is designed to contain a flat object, such as a letter or card....
are one and the same. Most postal administrations forbid enclosures in these light letters, which are usually sent abroad at a preferential rate. Printed warnings existed to say that an enclosure would cause the mail would go at the higher letter rate.

Most aerograms have an imprinted stamp
Imprinted stamp
In philately an imprinted stamp is a stamp printed on to a piece of postal stationery such as a stamped envelope, postal card, letter sheet, letter card, aerogram or wrapper. The printing is flat upon the surface of the paper, as opposed to an embossed stamp which has a raised relief...
indicating the prepayment of postage. As such, this meets the definition of being postal stationery
Postal stationery
A piece of postal stationery is a stationery item, such as a stamped envelope, letter sheet, postal card, lettercard, aerogram or wrapper, with an imprinted stamp or inscription indicating that a specific rate of postage or related service has been prepaid...
. However, some countries such as New Zealand
New Zealand
New Zealand is an island country in the south-western Pacific Ocean comprising two main landmasses and numerous smaller islands. The country is situated some east of Australia across the Tasman Sea, and roughly south of the Pacific island nations of New Caledonia, Fiji, and Tonga...
, Zimbabwe
Zimbabwe
Zimbabwe is a landlocked country located in the southern part of the African continent, between the Zambezi and Limpopo rivers. It is bordered by South Africa to the south, Botswana to the southwest, Zambia and a tip of Namibia to the northwest and Mozambique to the east. Zimbabwe has three...
and Ireland
Republic of Ireland
Ireland , described as the Republic of Ireland , is a sovereign state in Europe occupying approximately five-sixths of the island of the same name. Its capital is Dublin. Ireland, which had a population of 4.58 million in 2011, is a constitutional republic governed as a parliamentary democracy,...
, sell unstamped aerograms. Unstamped aerograms are referred to as formular aerograms and can be issued by either postal authorities or by private companies. Senders are required to write their name and address on the reverse.

The aerogram was largely popularized by its use during the Second World War (1939–45). Lieutenant Colonel R. E. Evans, Royal Engineers
Royal Engineers
The Corps of Royal Engineers, usually just called the Royal Engineers , and commonly known as the Sappers, is one of the corps of the British Army....
, Assistant Director Army Postal Service Middle East Force (MEF), proposed that a lightweight self-sealing letter card that weighed only 1/10 oz be adopted by the British Army
British Army
The British Army is the land warfare branch of Her Majesty's Armed Forces in the United Kingdom. It came into being with the unification of the Kingdom of England and Scotland into the Kingdom of Great Britain in 1707. The new British Army incorporated Regiments that had already existed in England...
for air mail purposes. He recommended its use to Sir Anthony Eden, the Secretary of State for War during his visit to the Middle East, in late 1940. By January the following year, General Archibald Wavell, 1st Earl Wavell
Archibald Wavell, 1st Earl Wavell
Field Marshal Archibald Percival Wavell, 1st Earl Wavell GCB, GCSI, GCIE, CMG, MC, PC was a British field marshal and the commander of British Army forces in the Middle East during the Second World War. He led British forces to victory over the Italians, only to be defeated by the German army...
, the Commander-in-Chief, MEF was told by Eden that "Your Assistant Director Army Postal Services may forthwith introduce an Air Mail Letter Card Service for the Middle East. Use British stamps from all countries, including Egypt.".

Evans first saw the air letter form in Iraq, whilst touring the Commands after his arrival in the Middle East theatre. It had been introduced into the Iraqi postal service in 1933 by the then Inspector General of Posts and Telegraphs, Major DW Grumbley CBE DSO Royal Engineers. The original form, on thin paper was 124mm x 99mm in size, greyish in colour, with bluelined framing and with the designation legend on the front. It had a beautifully impressed effigy of Faisal I of Iraq
Faisal I of Iraq
Faisal bin Hussein bin Ali al-Hashemi, was for a short time King of the Arab Kingdom of Syria or Greater Syria in 1920, and was King of the Kingdom of Iraq from 23 August 1921 to 1933...
and was printed by Bradbury Wilkinson.

On 1 March 1941, the air mail service between the Middle East and the UK was started, using a combination of Imperial Airways
Imperial Airways
Imperial Airways was the early British commercial long range air transport company, operating from 1924 to 1939 and serving parts of Europe but especially the Empire routes to South Africa, India and the Far East...
seaplane
Seaplane
A seaplane is a fixed-wing aircraft capable of taking off and landing on water. Seaplanes that can also take off and land on airfields are a subclass called amphibian aircraft...
s and military transport. The private nature of the air letter ensured its popularity among its users and that popularity, with its lightness, brought about its continued use as today's civilian air letter (aerograms) and the British military "bluey". (see British Forces Post Office
British Forces Post Office
The British Forces Post Office provides a postal service to HM Forces, separate from that provided by Royal Mail in the United Kingdom. BFPO addresses are used for the delivery of mail in the UK and around the world...
for further information).