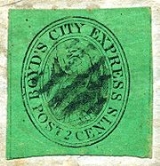 Encyclopedia
In philately
Philately
Philately is the study of stamps and postal history and other related items. Philately involves more than just stamp collecting, which does not necessarily involve the study of stamps. It is possible to be a philatelist without owning any stamps...
, a cinderella stamp has been defined as "Virtually anything resembling a postage stamp, but not issued for postal purposes by a government postal administration..." The term also excludes imprinted stamp
Imprinted stamp
In philately an imprinted stamp is a stamp printed on to a piece of postal stationery such as a stamped envelope, postal card, letter sheet, letter card, aerogram or wrapper. The printing is flat upon the surface of the paper, as opposed to an embossed stamp which has a raised relief...
s on postal stationery
Postal stationery
A piece of postal stationery is a stationery item, such as a stamped envelope, letter sheet, postal card, lettercard, aerogram or wrapper, with an imprinted stamp or inscription indicating that a specific rate of postage or related service has been prepaid...
.

As cinderella stamps are defined by what they are not, there are many different types and the term is usually construed fairly loosely. Items normally regarded as falling within the area are poster stamp
Poster stamp
The poster stamp was an advertising label, a little larger than most postage stamps, that originated in the mid-19th century and quickly became a collecting craze, growing in popularity up until World War One and then declining by World War Two until they are now almost forgotten except by...
s, propaganda labels, commemorative stickers, stamps issued by non-recognised countries or governments, court fee stamps, charity label
Charity label
A charity label is a label resembling a postage stamp, sold by charities to raise funds. They are generally intended to be used on mail, as a way of advertising the sender's support of the charity's cause....
s like Christmas seal
Christmas Seal
Christmas Seals are labels placed on mail during the Christmas season to raise funds and awareness for charitable programs.They have become particularly associated with lung diseases such as tuberculosis, and with child welfare...
s and Easter seals
Easter seals (philately)
An Easter Seal is a form of charity label issued to raise funds for charitable purposes.It is applied to the front of mail to show support for particular charitable causes....
, most telegraph stamp
Telegraph stamp
Telegraph stamps are stamps intended solely for the prepayment of telegraph fees. The customer completed a telegraph form before handing it with payment to the clerk who applied a telegraph stamp and cancelled it to show that payment had been made...
s, some railway stamp
Railway stamp
In philately a railway stamp is a stamp issued to pay the cost of the conveyance of a letter or parcel by rail.A wide variety of railway stamps have been issued by different countries and by private and state railways...
s, some local stamps and purely decorative items created for advertising or amusement. Revenue stamp
Revenue stamp
A revenue stamp, tax stamp or fiscal stamp is a adhesive label used to collect taxes or fees on documents, tobacco, alcoholic drinks, drugs and medicines, playing cards, hunting licenses, firearm registration, and many other things...
s are sometime considered cinderellas, but as they are normally issued by an official government agency, they tend to be classed separately from other cinderella stamps.

Local stamps have a long history and began to be issued soon after the invention of the postage stamp. Zemstvo stamp
Zemstvo stamp
A Zemstvo stamp was a Russian local stamp used widely in rural areas from 1865. It was named after the Zemstvo local administrative districts created in 1864. The stamps ceased at about the time of the 1917 Russian revolution.- Background :...
s were issued in rural areas of the Russian Empire (c.1860-1917), and local stamps have been issued in many other countries. Many local stamps performed a genuine postal function where the national post was lacking. Other locals, however, amount to nothing more than colourful labels.

In the United Kingdom many local carriage labels have been issued by offshore islands, which in some cases had a genuine use to pay for transport of the mail to the mainland by ferry. Others were produced simply to sell to collectors and tourists. Usually they had to be placed on the back of the envelope, with a conventional stamp on the front to pay for onward delivery by the official postal service. Islands for which such labels have been issued include the Summer Isles
Summer Isles
The Summer Isles are an archipelago lying in the mouth of Loch Broom, in the Highland region of Scotland.-Geography:The only inhabited isle, Tanera Mòr, is also the largest. It is home to an Atlantic salmon fish farm, some rental holiday homes, a café and a post office, which has operated its own...
, Lundy
Lundy
Lundy is the largest island in the Bristol Channel, lying off the coast of Devon, England, approximately one third of the distance across the channel between England and Wales. It measures about at its widest. Lundy gives its name to a British sea area and is one of the islands of England.As of...
and the Calf of Man
Calf of Man
Calf of Man, sometimes known as the Calf of Mann , is a island , off the southwest coast of the Isle of Man. It is separated from the Isle of Man by a narrow stretch of water called the Calf Sound. Like the nearby rocky islets of Chicken Rock and Kitterland, it is part of the parish of Rushen. It...
.

Hotel Stamps
Hotel post
Hotel Post was a service offered by remote Swiss hotels for the carriage of mail to the nearest official post office.- Origins :In the nineteenth century, Switzerland developed an important tourist industry. Guests enjoyed Alpine air and spas at hotels in remote areas that were not serviced by the...
may also be regarded as a form of local stamp.

While it is common to find patriotic sentiments on official stamps, the term propaganda stamp is usually used to mean unofficial stamps produced to promote a particular ideology, or to create confusion within an enemy state. Stamps with encouraging slogans have been attached to letters for prisoners of war, or troops serving aboad.

Sometimes stamps are issued by breakaway governments, governments in exile or micronation
Micronation
Micronations, sometimes also referred to as model countries and new country projects, are entities that claim to be independent nations or states but which are not recognized by world governments or major international organizations...
s in order to give themselves greater legitimacy; however, these stamps usually have no postal validity and are therefore cinderella items. The Indian National Army (Azad Hind) produced ten stamps
Azad Hind stamps
The Azad Hind Stamps are a set of Cinderella stamps in six different designs produced in 1943 in Nazi Germany for Subhas Chandra Bose's Azad Hind...
as part of their campaign.

From 1951 to 1966, UNESCO
UNESCO
The United Nations Educational, Scientific and Cultural Organization is a specialized agency of the United Nations...
issued a series of 41 "gift stamps." Considered to be cinderellas, they were produced to raise money for the organization. The series is unusual in being an international cooperative effort. Most are readily available from specialized dealers.

Illustrator and anarchist Clifford Harper
Clifford Harper
Clifford Harper is an illustrator and militant anarchist. He was born in Chiswick, West London on the 13th of July 1949. His father was a postman and his mother a cook. Expelled from school at 13 and placed on 2 years probation at 14, he then worked in a series of "menial jobs" before 'turning on,...
, whose family had an occupational history in the postal service, designed stamps "for post-revolutionary post" bearing the image of anarchist figures such as Pierre-Joseph Proudhon
Pierre-Joseph Proudhon
Pierre-Joseph Proudhon was a French politician, mutualist philosopher and socialist. He was a member of the French Parliament, and he was the first person to call himself an "anarchist". He is considered among the most influential theorists and organisers of anarchism...
("property is theft"), Oscar Wilde
Oscar Wilde
Oscar Fingal O'Flahertie Wills Wilde was an Irish writer and poet. After writing in different forms throughout the 1880s, he became one of London's most popular playwrights in the early 1890s...
, Emma Goldman
Emma Goldman
Emma Goldman was an anarchist known for her political activism, writing and speeches. She played a pivotal role in the development of anarchist political philosophy in North America and Europe in the first half of the twentieth century....
and Emiliano Zapata
Emiliano Zapata
Emiliano Zapata Salazar was a leading figure in the Mexican Revolution, which broke out in 1910, and which was initially directed against the president Porfirio Díaz. He formed and commanded an important revolutionary force, the Liberation Army of the South, during the Mexican Revolution...
. Colin Ward
Colin Ward
Colin Ward was a British anarchist writer. He has been called "one of the greatest anarchist thinkers of the past half century, and a pioneering social historian." -Life:...
, along with Harper, published a book in 1997 called Stamps: Designs For Anarchist Postage Stamps, containing an essay by Ward on the subject of anarchists and postage stamps. Fund-raising stamps with anti-state messages have appeared within labor unions such as the ones printed by the Confederación Nacional del Trabajo, and the International Workers of the World.

In the United Kingdom, the railway letter service, a special facility offered by most British railway companies since 1891, produced a great variety of stamps and labels, which were originally an official requirement of the service. Current officially licensed Heritage railway
Heritage railway
thumb|right|the Historical [[Khyber train safari|Khyber Railway]] goes through the [[Khyber Pass]], [[Pakistan]]A heritage railway , preserved railway , tourist railway , or tourist railroad is a railway that is run as a tourist attraction, in some cases by volunteers, and...
-operated services include the Ffestiniog Railway Letter Service
Ffestiniog Railway Letter Service
The Festiniog Railway Letter Service is an officially authorised service within the United Kingdom railway system for posting and transmission of letters, and under certain circumstances also delivering the letters directly to intended recipients...
. United Kingdom railway letter stamps
Railway stamp
In philately a railway stamp is a stamp issued to pay the cost of the conveyance of a letter or parcel by rail.A wide variety of railway stamps have been issued by different countries and by private and state railways...
almost always specify a fee (often, even in Victorian times, priced higher than the current postage fee, which additionally had to be paid with regular postage stamps) for the use of this official and once-important British postal facility.

While many cinderella stamps are common, others were privately produced in limited numbers, are little-known, and can be quite rare. Cinderella stamps are not normally listed in the main stamp collecting catalogues. If they are, it is usually in a separate appendix within the publication, and so they are sometimes called back of the book stamps.

There are cinderella stamp club
Cinderella Stamp Club
The Cinderella Stamp Club was founded on 5 June 1959 in London, England, and is an association of philatelists, amateur and professional, whose interests lie in local stamps, telegraph stamps, railway stamps, revenue stamps, fiscals, forgeries, bogus and phantom issues, Christmas, Red Cross, TB and...
s in the United Kingdom and in Australia, both of which accept members worldwide.