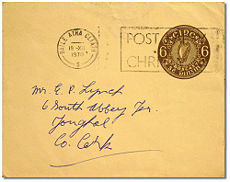 In philately
Philately
Philately is the study of stamps and postal history and other related items. Philately involves more than just stamp collecting, which does not necessarily involve the study of stamps. It is possible to be a philatelist without owning any stamps...
an imprinted stamp is a stamp
Postage stamp
A postage stamp is a small piece of paper that is purchased and displayed on an item of mail as evidence of payment of postage. Typically, stamps are made from special paper, with a national designation and denomination on the face, and a gum adhesive on the reverse side...
printed on to a piece of postal stationery
Postal stationery
A piece of postal stationery is a stationery item, such as a stamped envelope, letter sheet, postal card, lettercard, aerogram or wrapper, with an imprinted stamp or inscription indicating that a specific rate of postage or related service has been prepaid...
such as a stamped envelope
Stamped envelope
A stamped envelope or postal stationery envelope is an envelope with a printed or embossed indicium indicating the prepayment of postage. It is a form of postal stationery.-Use in the United States:In August 1852 an act of the U.S...
, postal card
Postal card
Postal cards are postal stationery with an imprinted stamp or indicium signifying the prepayment of postage. They are sold by postal authorities. In January, 1869 Emanuel Herrmann of Austria described the advantages of a Correspondenz Karte. By October, 1869 the world's first postal card was...
, letter sheet
Letter sheet
In philatelic terminology a Letter sheet, often written lettersheet, is nowadays an item of postal stationery issued by a postal authority. It is a sheet of paper that can be folded, usually sealed , and mailed without the use of an envelope...
, letter card, aerogram
Aerogram
An Aerogram, Aérogramme or Air Letter is a thin lightweight piece of foldable and gummed paper for writing a letter for transit via airmail, in which the letter and envelope are one and the same. Most postal administrations forbid enclosures in these light letters, which are usually sent abroad at...
or wrapper
Wrapper (philately)
In philately a wrapper is a form of postal stationery which pays the cost of the delivery of a newspaper or a periodical. The wrapper is a sheet of paper, large enough to wrap around a folded or rolled newspaper and with an imprinted stamp to pay the cost of postage...
. The printing is flat upon the surface of the paper, as opposed to an embossed stamp which has a raised relief. An imprinted stamp is also known as unadhesive stamp or indicium.

In the early days of philately it was common to cut the imprinted stamp from the rest of the item and retain only the stamp. This is known as a cut square
Cut square
In philately, a cut square is an imprinted stamp cut from an item of postal stationery such as a stamped envelope, postal card, letter sheet, letter card, aerogram or wrapper in a square or rectangular shape. An alternative use of the term is simply any stamp, from sheets or postal stationery, cut...
. In the U.K. this is known as cut-out
Cut-out (philately)
In philately a cut-out is an imprinted stamp cut from an item of postal stationery such as a postcard, letter sheet, aerogramme or wrapper and used as a normal stamp....
. If the imprinted stamp is then trimmed to shape in which case it is known as cut to shape
Cut to shape
Cut to shape is a philatelic term referring to a postage stamp or postal stationery indicium that has been cut to the shape of the design, such as an octagon, circle or oval, instead of simply cut into a square or rectangular shape....
. It is a full corner if it has the complete corner of the envelope with side and back flaps attached. Today collectors much prefer to keep postal stationery items intact because cutting destroys the postal history
Postal history
Postal history is the study of postal systems and how they operate and, or, the study of postage stamps and covers and associated material illustrating historical episodes of postal systems...
, the knife
Knife (envelope)
The term knife is used to describe the cutting die for envelope or wrapper blanks. It is called a knife rather than a die in order to reserve the term die to describe the object which makes a embossed printed impression of the stamp or indicium on the envelope. Traditionally, a knife would...
of the stamped envelope, the postmark
Postmark
thumb|USS TexasA postmark is a postal marking made on a letter, package, postcard or the like indicating the date and time that the item was delivered into the care of the postal service...
and any receiving marks.

In some countries it was permitted to cut out the imprinted stamp and use it to pay postage on another item of mail. This is also known as a cut-out
Cut-out (philately)
In philately a cut-out is an imprinted stamp cut from an item of postal stationery such as a postcard, letter sheet, aerogramme or wrapper and used as a normal stamp....
.

Items of postal stationery with an imprinted stamp are sometimes found with adhesive stamps added to pay for additional services such as airmail
Airmail
Airmail is mail that is transported by aircraft. It typically arrives more quickly than surface mail, and usually costs more to send...
, registration
Registered mail
Registered mail describes letters, packets or other postal documents considered valuable and need a chain of custody that provides more control than regular mail. The posted item has its details recorded in a register to enable its location to be tracked, sometimes with added insurance to cover loss...
or the part transport of mail by a local postal service
Local post
A local post is a mail service that operates only within a limited geographical area, typically a city or a single transportation route. Historically, some local posts have been operated by governments, while others, known as private local posts have been for-profit companies...
. Such covers
Cover (philately)
In philately, the term cover pertains to the outside of an envelope or package with an address, typically with postage stamps that have been cancelled and is a term generally used among stamp and postal history collectors. The term does not include the contents of the letter or package, although...
are known as conjunctive covers, and such use is known as a conjunctive use
Conjunctive use (philately)
In philately the term conjunctive use refers to the simultaneous use of different types of postage stamps to pay separate parts of a postal charge on the same letter....
. Placement of the adhesive stamp in addition to the imprinted stamp in order to pay a higher postal rate is called "uprated" (Spanish= franqueos complementarios). This term also applies when an imprinted or embossed stamp is overprinted or handstamped to increase the face value.