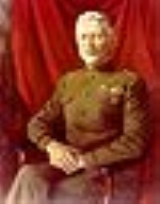 March was the son of Francis Andrew March, considered the principal founder of modern comparative linguistics
Comparative linguistics
Comparative linguistics is a branch of historical linguistics that is concerned with comparing languages to establish their historical relatedness....
in Anglo-Saxon
Anglo-Saxon
Anglo-Saxon may refer to:* Anglo-Saxons, a group that invaded Britain** Old English, their language** Anglo-Saxon England, their history, one of various ships* White Anglo-Saxon Protestant, an ethnicity* Anglo-Saxon economy, modern macroeconomic term...
and one of the first professors to advocate and teach English in colleges and universities. Peyton March attended Lafayette College
Lafayette College
Lafayette College is a private coeducational liberal arts and engineering college located in Easton, Pennsylvania, USA. The school, founded in 1826 by James Madison Porter,son of General Andrew Porter of Norristown and citizens of Easton, first began holding classes in 1832...
, where his father occupied the first chair of English language and comparative philology in the United States. In 1884, he was appointed to West Point
United States Military Academy
The United States Military Academy at West Point is a four-year coeducational federal service academy located at West Point, New York. The academy sits on scenic high ground overlooking the Hudson River, north of New York City...
and graduated in 1888. He was assigned to the 3rd Artillery.

He married Josephine Smith Cunningham (d. 1904) in 1891. They had a son, Peyton, Jr.
Peyton C. March, Jr.
Peyton Conway March, Jr. was an American soldier and pioneer aviator. He was the son of Peyton C. March and Josephine Smith Cunningham and was born at Fort Monroe where his father was stationed....
(b. 1896), who was killed in a plane crash during World War I. March AFB in Riverside, California
Riverside, California
Riverside is a city in Riverside County, California, United States, and the county seat of the eponymous county. Named for its location beside the Santa Ana River, it is the largest city in the Riverside-San Bernardino-Ontario metropolitan area of Southern California, 4th largest inland California...
was named in young March's honor.

In 1894, March was assigned to the 5th Artillery and promoted to 1st lieutenant. He was sent to the Artillery School in 1896. He organized the Astor Battery and was sent to the Philippines
Philippines
The Philippines , officially known as the Republic of the Philippines , is a country in Southeast Asia in the western Pacific Ocean. To its north across the Luzon Strait lies Taiwan. West across the South China Sea sits Vietnam...
in the Spanish-American War
Spanish-American War
The Spanish–American War was a conflict in 1898 between Spain and the United States, effectively the result of American intervention in the ongoing Cuban War of Independence...
. In 1899, March was the aide to Gen. Arthur MacArthur, Jr.
Arthur MacArthur, Jr.
Lieutenant General Arthur MacArthur, Jr. , was a United States Army General. He became the military Governor-General of the American-occupied Philippines in 1900 but his term ended a year later due to clashes with the civilian governor, future President William Howard Taft...
. Later that year he was promoted to major. He continued to serve in the Philippines, and was a provincial governor and commissary of prisoners.

In 1903 he was sent to Fort Riley
Fort Riley
Fort Riley is a United States Army installation located in Northeast Kansas, on the Kansas River, between Junction City and Manhattan. The Fort Riley Military Reservation covers 100,656 acres in Geary and Riley counties and includes two census-designated places: Fort Riley North and Fort...
and commanded the 19th Battery of the field artillery
Field artillery
Field artillery is a category of mobile artillery used to support armies in the field. These weapons are specialized for mobility, tactical proficiency, long range, short range and extremely long range target engagement....
. Later that year he was sent to Washington, D.C.
Washington, D.C.
Washington, D.C., formally the District of Columbia and commonly referred to as Washington, "the District", or simply D.C., is the capital of the United States. On July 16, 1790, the United States Congress approved the creation of a permanent national capital as permitted by the U.S. Constitution....
and served on the newly created General Staff
General Staff
A military staff, often referred to as General Staff, Army Staff, Navy Staff or Air Staff within the individual services, is a group of officers and enlisted personnel that provides a bi-directional flow of information between a commanding officer and subordinate military units...
.

In 1904–1905, March was one of several American military attaché
Military attaché
A military attaché is a military expert who is attached to a diplomatic mission . This post is normally filled by a high-ranking military officer who retains the commission while serving in an embassy...
s serving with the Imperial Japanese Army
Imperial Japanese Army
-Foundation:During the Meiji Restoration, the military forces loyal to the Emperor were samurai drawn primarily from the loyalist feudal domains of Satsuma and Chōshū...
in the Russo-Japanese War
Russo-Japanese War
The Russo-Japanese War was "the first great war of the 20th century." It grew out of rival imperial ambitions of the Russian Empire and Japanese Empire over Manchuria and Korea...
. He would become one of eight observers who were later promoted to the rank of General in the U.S. Army.

In 1907, March commanded the 1st Artillery Battalion, 6th Field Artillery. March then served as adjutant
Adjutant
Adjutant is a military rank or appointment. In some armies, including most English-speaking ones, it is an officer who assists a more senior officer, while in other armies, especially Francophone ones, it is an NCO , normally corresponding roughly to a Staff Sergeant or Warrant Officer.An Adjutant...
of Fort Riley, then served as adjutant at several other commands, including at the War Department.

In 1916, he was promoted to colonel and commanded the 8th Field Artillery on the Mexican border.


World War I and later

In June 1917, March was promoted to brigadier general and commanded the 1st Field Artillery Brigade, 1st Infantry Division, American Expeditionary Forces. Later that year, he was promoted to major general and commanded the artillery units of the U.S. First Army
U.S. First Army
The First United States Army is a field army of the United States Army. It now serves a mobilization, readiness and training command.- Establishment and World War I :...
and all non-divisional artillery units.

In March 1918, he was recalled to Washington, took over as acting Army Chief of Staff on March 4 and was Army Chief of Staff on May 20, 1918. He was promoted to temporary general.
March was highly critical of President Wilson's decision to send an American Expedition to North Russia and Siberia in 1918 during the Russian Civil War
Russian Civil War
The Russian Civil War was a multi-party war that occurred within the former Russian Empire after the Russian provisional government collapsed to the Soviets, under the domination of the Bolshevik party. Soviet forces first assumed power in Petrograd The Russian Civil War (1917–1923) was a...
(the so-called Siberian Intervention
Siberian Intervention
The ', or the Siberian Expedition, of 1918–1922 was the dispatch of troops of the Entente powers to the Russian Maritime Provinces as part of a larger effort by the western powers and Japan to support White Russian forces against the Bolshevik Red Army during the Russian Civil War...
) ostensibly to prop-up the White movement
White movement
The White movement and its military arm the White Army - known as the White Guard or the Whites - was a loose confederation of Anti-Communist forces.The movement comprised one of the politico-military Russian forces who fought...
war effort, secure the railroads, support the Czech Legion trapped there, and stop the Japanese from exploiting the chaos in order to colonize Siberia. March wrote after the pull-out of American forces in 1920:
He served as Chief of Staff until June 30, 1921. As Chief of Staff he reorganized the Army structure, and abolished the distinctions between the Regular Army, the Army Reserves, and the Army National Guard
Army National Guard
Established under Title 10 and Title 32 of the U.S. Code, the Army National Guard is part of the National Guard and is divided up into subordinate units stationed in each of the 50 states, three territories and the District of Columbia operating under their respective governors...
during war time. He created new technical branches in the service including the United States Army Air Corps
United States Army Air Corps
The United States Army Air Corps was a forerunner of the United States Air Force. Renamed from the Air Service on 2 July 1926, it was part of the United States Army and the predecessor of the United States Army Air Forces , established in 1941...
, Chemical Warfare Corps, Transportation Corps, and Tank Corps. He also centralized control over supply. After the war ended, he supervised the demobilization of the Army. As Chief of Staff he often came into disagreement with Gen. John J. Pershing
John J. Pershing
John Joseph "Black Jack" Pershing, GCB , was a general officer in the United States Army who led the American Expeditionary Forces in World War I...
, who wanted to conduct the AEF as an independent command.

March was a highly efficient and capable administrator who did much to modernize the American Army and prepare it for combat in the First World War.