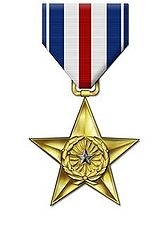 Why is the military medal, the silver, star gold?
More

The Silver Star differs from the service crosses in that it requires a lesser degree of gallantry and need not be earned while in a position of great responsibility.

Air Force pilots, combat systems officers, Navy and Marine Corps Naval Aviators and Naval Flight Officers flying fighter aircraft are often considered eligible to receive a Silver Star upon becoming an ace
Flying ace
A flying ace or fighter ace is a military aviator credited with shooting down several enemy aircraft during aerial combat. The actual number of aerial victories required to officially qualify as an "ace" has varied, but is usually considered to be five or more...
(i.e., having five or more confirmed aerial kills), which entails the pilot and, in multi-seat fighters, the weapons system officer or radar intercept officer, intentionally and successfully risking his life multiple times under combat conditions and emerging victorious. However, during the Vietnam War, the last conflict to produce U.S. fighter aces, the one USAF pilot, the two USAF navigators/weapon systems officers (who were later retrained as pilots), the one USN Naval Aviator and the one USN Naval Flight Officer/radar intercept officer to achieve this distinction were eventually awarded the Air Force Cross
Air Force Cross (United States)
The Air Force Cross is the second highest military decoration that can be awarded to a member of the United States Air Force. The Air Force Cross is the Air Force decoration equivalent to the Distinguished Service Cross and the Navy Cross .The Air Force Cross is awarded for extraordinary heroism...
and Navy Cross
Navy Cross
The Navy Cross is the highest decoration that may be bestowed by the Department of the Navy and the second highest decoration given for valor. It is normally only awarded to members of the United States Navy, United States Marine Corps and United States Coast Guard, but can be awarded to all...
, respectively, in addition to Silver Stars previously awarded for earlier aerial kills.

The Department of Defense does not keep extensive records of Silver Star awards. Independent groups estimate that between 100,000 and 150,000 Silver Stars have been awarded since the award was established. Colonel
Colonel (United States)
In the United States Army, Air Force, and Marine Corps, colonel is a senior field grade military officer rank just above the rank of lieutenant colonel and just below the rank of brigadier general...
David Hackworth is the record holder for most Silver Stars awarded to a single person. He earned ten Silver Stars for service in the Korean War
Korean War
The Korean War was a conventional war between South Korea, supported by the United Nations, and North Korea, supported by the People's Republic of China , with military material aid from the Soviet Union...
and the Vietnam War
Vietnam War
The Vietnam War was a Cold War-era military conflict that occurred in Vietnam, Laos, and Cambodia from 1 November 1955 to the fall of Saigon on 30 April 1975. This war followed the First Indochina War and was fought between North Vietnam, supported by its communist allies, and the government of...
, in addition to two Distinguished Service Crosses.

The Silver Star is a gold five-pointed star
Five-pointed star
A five-pointed star is a very common ideogram throughout the world. If the colinear edges are joined together a pentagram is produced, which is the simplest of the unicursal star polygons, and a symbol of mystical and magical significance....
, 1 inches (38 mm) in circumscribing diameter with a laurel wreath
Laurel wreath
A laurel wreath is a circular wreath made of interlocking branches and leaves of the bay laurel , an aromatic broadleaf evergreen. In Greek mythology, Apollo is represented wearing a laurel wreath on his head...
encircling rays from the center and a 3/16 inch (5 mm) diameter silver star superimposed in the center. The pendant is suspended from a rectangular shaped metal loop with rounded corners. The reverse has the inscription "FOR GALLANTRY IN ACTION". The ribbon is 1 inches (35 mm) wide and consists of the following stripes: 7/32 inch (6 mm) Old Glory red (center stripe); proceeding outward in pairs 7/32 inch (6 mm) white; 7/32 inch (6 mm) ultramarine blue; 3/64 inch (1 mm) white; and 3/32 inch (2 mm) ultramarine blue. 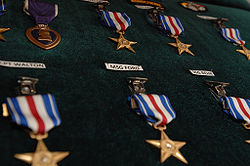 In 1944, four nurses serving in World War II – First Lieutenant
First Lieutenant
First lieutenant is a military rank and, in some forces, an appointment.The rank of lieutenant has different meanings in different military formations , but the majority of cases it is common for it to be sub-divided into a senior and junior rank...
Mary Roberts, Second Lieutenant
Second Lieutenant
Second lieutenant is a junior commissioned officer military rank in many armed forces.- United Kingdom and Commonwealth :The rank second lieutenant was introduced throughout the British Army in 1871 to replace the rank of ensign , although it had long been used in the Royal Artillery, Royal...
Elaine Roe
Elaine Roe
Second Lieutenant Elaine A. Roe was an officer in the United States Army during World War II. She was awarded the Silver Star for her actions during Operation Shingle...
, Second Lieutenant Rita Virginia Rourke, and Second Lieutenant Ellen Ainsworth (posthumous) – became the first female recipients of the Silver Star, all cited for their bravery in successfully evacuating the 33rd Field Hospital at Anzio
Anzio
Anzio is a city and comune on the coast of the Lazio region of Italy, about south of Rome.Well known for its seaside harbour setting, it is a fishing port and a departure point for ferries and hydroplanes to the Pontine Islands of Ponza, Palmarola and Ventotene...
, Italy on February 10.

The four nurses remained the sole female recipients of the Silver Star until Sergeant
Sergeant
Sergeant is a rank used in some form by most militaries, police forces, and other uniformed organizations around the world. Its origins are the Latin serviens, "one who serves", through the French term Sergent....
Leigh Ann Hester
Leigh Ann Hester
Leigh Ann Hester of the 617th Military Police Company, a Kentucky Army National Guard unit out of Richmond, Kentucky, received the Silver Star for her actions on March 20, 2005 during an enemy ambush on a supply convoy near the town of Salman Pak, Iraq.Hester was the first female soldier to...
was awarded the Silver Star in 2005 for gallantry during an insurgent ambush on a convoy in Iraq. Three nurses who had served in World War I were posthumously awarded the Silver Star in 2007. Army Specialist
Specialist (rank)
Specialist is one of the four junior enlisted ranks in the U.S. Army, just above Private First Class and equivalent in pay grade to Corporal. Unlike Corporals, Specialists are not considered junior non-commissioned officers...
Monica Lin Brown
Monica Lin Brown
Monica Lin Brown is a medic in the 782nd Brigade Support Battalion, 4th Brigade Combat Team, 82nd Airborne Division who became the first woman in Afghanistan and only the second woman since World War II to receive the Silver Star, the United States' third-highest medal for valor.After a roadside...
was awarded the Silver Star in March 2008 for actions in the War in Afghanistan
War in Afghanistan (2001–present)
The War in Afghanistan began on October 7, 2001, as the armed forces of the United States of America, the United Kingdom, Australia, and the Afghan United Front launched Operation Enduring Freedom...
.