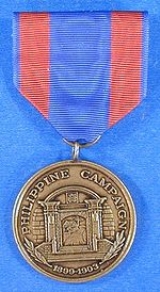 
The Army’s Philippine Campaign Medal was issued as a one time service medal regardless of the number of campaigns in which a service member participated. The Silver Citation Star was authorized for those who had performed feats of heroism or bravery.

The Army and Navy versions of the Philippine Campaign Medal varied slightly in the design with the Army’s version of the award displaying a bronze medallion with the words “Philippine Insurrection” centered above the year numeral 1898 and below a palm tree and Roman lamp. The ribbon for the Army’s medal consisted of a wide blue ribbon with two red stripes.

The Navy Philippine Campaign Medal was originally considered a completely separate award from the Army medal and appeared as suspended from a red and yellow ribbon.

On August 12, 1913, the Navy changed the ribbon color to match the Army’s version of the award and from that point on the Army and Navy Philippine Campaign Medals were considered the same award but with different medal styles. The Navy’s Philippine Campaign Medal displayed a bronze medallion with the words “Philippine Campaign”, centered above the dates “1898 – 1903”, and below a depiction of a stone gate leading into Manila
Manila
Manila is the capital of the Philippines. It is one of the sixteen cities forming Metro Manila.Manila is located on the eastern shores of Manila Bay and is bordered by Navotas and Caloocan to the north, Quezon City to the northeast, San Juan and Mandaluyong to the east, Makati on the southeast,...
.