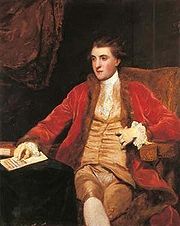 Both before and after the Union, Irish peerages were often used as a way of creating peerages which did not grant a seat in the English House of Lords and so allowed the grantee (such as Clive of India
Robert Clive, 1st Baron Clive
Major-General Robert Clive, 1st Baron Clive, KB , also known as Clive of India, was a British officer who established the military and political supremacy of the East India Company in Bengal. He is credited with securing India, and the wealth that followed, for the British crown...
) to sit in the House of Commons in London. As a consequence, many Irish peers had little or no connection to Ireland, and indeed the names of some Irish peerages (for example, the Earldoms of Mexborough
Earl of Mexborough
Earl of Mexborough, of Lifford in the County of Donegal, is a title in the Peerage of Ireland. It was created in 1766 for John Savile, 1st Baron Pollington, Member of Parliament for Hedon and New Shoreham...
and Ranfurly
Earl of Ranfurly
Earl of Ranfurly, of Dungannon in the County of Tyrone, is a title in the Peerage of Ireland. It was created in 1831 for Thomas Knox, 2nd Viscount Northland. He had earlier represented County Tyrone in the House of Commons, and had already been created Baron Ranfurly, of Ramphorlie in the County of...
) refer to places elsewhere in the British Isles
British Isles
The British Isles are a group of islands off the northwest coast of continental Europe that include the islands of Great Britain and Ireland and over six thousand smaller isles. There are two sovereign states located on the islands: the United Kingdom of Great Britain and Northern Ireland and...
. Irish peerages continued to be created for almost a century after the Union, although the treaty of Union placed restrictions on their numbers: three needed to become extinct before a new peerage could be granted, until there were only 100 Irish peers - a condition still not achieved. There was a spate of creations of Irish peerages from 1797 onwards, mostly peerages of higher ranks for existing Irish peers, as part of the negotiation of the Act of Union; this ended in the first week of January 1801, but the restrictions of the Act were not applied to the last few peers. Irish peerages were created in the early nineteenth century at least as often as the Act permitted, but the pace then slowed. The last two to be granted were the promotion of the Marquess of Abercorn, a United Kingdom peerage, to be Duke of Abercorn
Duke of Abercorn
The title Duke of Abercorn was created in the Peerage of Ireland in 1868 and bestowed upon James Hamilton, 2nd Marquess of Abercorn.This article also covers the Earls and Marquesses of Abercorn, all named after Abercorn, West Lothian, in Scotland.-History:...
in the Irish Peerage when he became Lord-Lieutenant of Ireland in 1868, and the granting of Barony of Curzon of Kedleston
Marquess Curzon of Kedleston
The title Marquess Curzon of Kedleston was created in the Peerage of the United Kingdom in 1921 for the Foreign Secretary George Nathaniel Curzon, the then 1st Earl Curzon of Kedleston. The title became extinct upon his death four years later....
to an English MP when he became Viceroy of India in 1898.

When one of the Irish representative peers died, the Irish Peerage met to elect his replacement; but the officers required to do this were abolished as part of the settlement of the Irish War of Independence
Irish War of Independence
The Irish War of Independence , Anglo-Irish War, Black and Tan War, or Tan War was a guerrilla war mounted by the Irish Republican Army against the British government and its forces in Ireland. It began in January 1919, following the Irish Republic's declaration of independence. Both sides agreed...
. The existing representative peers kept their seats in the House of Lords, but they have not been replaced. Since the death of Francis Needham, 4th Earl of Kilmorey
Francis Needham, 4th Earl of Kilmorey
Francis Charles Adelbert Henry Needham, 4th Earl of Kilmorey PC OBE , styled Viscount Newry from 1883 to 1915, was an Anglo-Irish peer.-Background:...
in 1961, none remains.

In the following table of the Peerage of Ireland as it currently stands, each peer's highest titles in each of the other Peerages (if any) are also listed. Irish peers possessed of titles in any of the other Peerages (except Scotland, which only got the right to an automatic seat in 1963, with the Peerage Act 1963
Peerage Act 1963
The Peerage Act 1963 is the Act of the Parliament of the United Kingdom that permitted peeresses in their own right and all Scottish hereditary peers to sit in the House of Lords, and which allows newly inherited hereditary peerages to be "disclaimed".-Background:The Act resulted largely from the...
) had automatic seats in the House of Lords until 1999.

In Ireland, barony
Barony (Ireland)
In Ireland, a barony is a historical subdivision of a county. They were created, like the counties, in the centuries after the Norman invasion, and were analogous to the hundreds into which the counties of England were divided. In early use they were also called cantreds...
may also refer to an obsolete political subdivision of a county
Counties of Ireland
The counties of Ireland are sub-national divisions used for the purposes of geographic demarcation and local government. Closely related to the county is the County corporate which covered towns or cities which were deemed to be important enough to be independent from their counties. A county...
. There is no connection between such a barony and the noble title of baron.