The political coalition was formed by the People's Justice Party
Parti Keadilan Rakyat
The People's Justice Party , often known simply as KeADILan) is a centrist political party in Malaysia formed in 2003 by a merger of the National Justice Party and the older Malaysian People's Party...
(PKR), Democratic Action Party
Democratic Action Party
The Democratic Action Party, or DAP is a secular, multi-racial, social democratic Malaysian political party.The DAP is one of the three major opposition parties in Malaysia, along with the PKR and PAS, that are seen as electable alternatives to the Barisan Nasional coalition of parties...
(DAP), and Pan-Malaysian Islamic Party (PAS) on April 1, 2008, after the 12th Malaysian general election
Malaysian general election, 2008
The 12th Malaysian general election was held on March 8, 2008, in accordance with Malaysian laws for national elections, which states that a general election must be held no later than five years subsequent to the previous elections; the previous general election was held in 2004...
. They had formed the Barisan Alternatif
Barisan Alternatif
Barisan Alternatif was a coalition of Malaysian opposition parties, formed as a counterweight to the ruling Barisan Nasional...
(Alternative Front) previously in the 10th general election. On April 20, 2010, the Sarawak National Party
Sarawak National Party
Sarawak National Party known by its acronym as "SNAP", is a political party in Malaysia. It was a member party of Barisan Nasional since Sarawak joined Malaysia until 2004 when it was expelled from Barisan Nasional...
(SNAP) officially joined as a member of the Pakatan Rakyat after being expelled from Barisan Nasional and again on May 6, 2011 SNAP declared to quit Pakatan Rakyat.

The former three parties had worked together in the 12th Malaysian general election, in which they gained control of five state assemblies and made significant gains at the federal level, denying the Barisan Nasional a two-third majority in the federal parliament
Parliament of Malaysia
The Parliament of Malaysia is the national legislature of Malaysia, based on the Westminster system. The bicameral parliament consists of the House of Representatives and the Senate. The King as the Head of State is the third component of Parliament....
. With the establishment of the Pakatan Rakyat coalition, the state governments of Kelantan
Kelantan
Kelantan is a state of Malaysia. The capital and royal seat is Kota Bharu. The Arabic honorific of the state is Darul Naim, ....
, Kedah
Kedah
Kedah is a state of Malaysia, located in the northwestern part of Peninsular Malaysia. The state covers a total area of over 9,000 km², and it consists of the mainland and Langkawi. The mainland has a relatively flat terrain, which is used to grow rice...
, Penang
Penang
Penang is a state in Malaysia and the name of its constituent island, located on the northwest coast of Peninsular Malaysia by the Strait of Malacca. It is bordered by Kedah in the north and east, and Perak in the south. Penang is the second smallest Malaysian state in area after Perlis, and the...
and Selangor
Selangor
Selangor also known by its Arabic honorific, Darul Ehsan, or "Abode of Sincerity") is one of the 13 states of Malaysia. It is on the west coast of Peninsular Malaysia and is bordered by Perak to the north, Pahang to the east, Negeri Sembilan to the south and the Strait of Malacca to the west...
are known as the Pakatan Rakyat state governments. The government of Perak
Perak
Perak , one of the 13 states of Malaysia, is the second largest state in the Peninsular Malaysia bordering Kedah and Yala Province of Thailand to the north, Penang to the northwest, Kelantan and Pahang to the east, Selangor the Strait of Malacca to the south and west.Perak means silver in Malay...
was under Pakatan until February 2009, when Barisan Nasional
Barisan Nasional
Barisan Nasional is a major political coalition in Malaysia, formed in 1973 as the successor to the Alliance . Along with its predecessor, it has been Malaysia's federal ruling political force since independence...
claimed power by defecting of 3 Pakatan's state assembly member as independent member who support the Barisan Nasional ruling, causing a constitutional crisis
2009 Perak constitutional crisis
The 2009 Perak constitutional crisis was a political dispute in Malaysia regarding the legitimacy of the Perak state government formed in February 2009. It began when three Pakatan Rakyat state legislators defected, causing a collapse of the state government...
which end up with the winning of Barisan Nasional following the judgement of the federal court.

Pakatan Rakyat is to be collectively led and managed by all constituent parties and pledges to uphold the rights and interests of all Malaysians. Each political party in People's Alliance has its own ideology; PKR promotes its ideals that revolves around social justice and anti-corruption themes, PAS with its aim to establish Malaysia as a nation based on Islamic legal theory and DAP with its secular, multi-racial, social democratic ideals.

PKR, DAP and PAS have also won in the recent general elections 41, 73, and 86 seats, respectively, in the various state assemblies.

As of 2009, Pakatan Rakyat remains an informal coalition. The media has reported that Malaysian law only allows the registration of a coalition comprising seven parties or more. However, former de facto Law Minister Zaid Ibrahim
Zaid Ibrahim
Dato' Mohd Zaid Ibrahim is a prominent Malaysian lawyer turned politician and is a former Minister in the Prime Minister's Department in charge of legal affairs and judicial reform...
, who coordinates the activities of the PR secretariat, has said "In fact in all our daily activities we are already acting as members of Pakatan and not just members of PKR, PAS or DAP." The media has reported that PR leaders "are understood to be in talks with several political parties to join the alliance." In October 2009, the Registrar of Societies stated that Pakatan could formally register as a coalition, as "The condition does not apply to political parties as they enjoy a national status. Only [a] state-level organisation aspiring to become a national entity needs to have seven members from the states." On 9 October 2009, Lim Kit Siang announced that Pakatan would seek to register itself as a formal coalition in light of this clarification. On 4 November 2009, Pakatan officials told the press that they had submitted a formal application to the Registrar of Societies, naming Zaid as the chairman of the alliance. PKR MP Tian Chua
Tian Chua
Chua Tian Chang, or better known as Tian Chua , is a Malaysian politician and is currently the Member of Parliament for the Batu constituency in Kuala Lumpur, Malaysia. He is also information chief of Parti Keadilan Rakyat, the largest opposition party in the Parliament of Malaysia...
publicly denied this, saying the coalition had not yet decided on a constitution, logo, or leadership structure.

Zaid has issued a statement on Pakatan's ideology, stating that in government, it would introduce anti-discrimination laws, set up a social safety net
Social safety net
Social safety nets, or "socioeconomic safety nets", are non-contributory transfer programs seeking to prevent the poor or those vulnerable to shocks and poverty from falling below a certain poverty level. Safety net programs can be provided by the public sector or by the private sector...
, establish a new education policy aimed at producing competitive graduates, especially among the Malays and Bumiputra
Bumiputra
Bumiputera or Bumiputra is a Malay term widely used in Malaysia, embracing indigenous people of the Malay Archipelago. The term comes from the Sanskrit word bhumiputra, which can be translated literally as "son of land"...
, repeal the Internal Security Act
Internal Security Act (Malaysia)
The Internal Security Act 1960 is a preventive detention law in force in Malaysia. The legislation was enacted after Malaysia gained independence from Britain in 1957. The ISA allows for detention without trial or criminal charges under limited, legally defined circumstances...
and Printing Presses and Publications Act
Printing Presses and Publications Act
The Printing Presses and Publications Act 1984 is a Malaysian statute governing publishing and the usage of printing presses in Malaysia. It replaced the Printing Presses Act 1948 and the Control of Imported Publications Act 1958...
, amend the Official Secrets Act
Official Secrets Act (Malaysia)
The Official Secrets Act 1972 , also known as the OSA, is a statute in Malaysia prohibiting the dissemination of information classified as an official secret. The legislation is based on the Official Secrets Act of the United Kingdom...
and Sedition Act
Sedition Act (Malaysia)
The Sedition Act in Malaysia is a law prohibiting discourse deemed as seditious. The act was originally enacted by the colonial authorities of British Malaya in 1948...
to limit the government's power, and reform law enforcement institutions like the courts
Courts of Malaysia
The Judiciary of Malaysia is largely centralized despite Malaysia's federal constitution, heavily influenced by the British Common Law and to a lesser extent Islamic law, and is mostly independent from political interference.-History:...
, the Royal Malaysian Police
Royal Malaysian Police
The Royal Malaysia Police is a part of the security forces structure in Malaysia. The force is a centralised organization with responsibilities ranging from traffic control to intelligence gathering. Its headquarters is located at Bukit Aman, Kuala Lumpur. The police force is led by an...
, and the Malaysian Anti-Corruption Commission
Malaysian Anti-Corruption Commission
The Malaysian Anti-Corruption Commission ' ) is a government agency in Malaysia that investigates and prosecutes corruption in the public and private sectors...
. Zaid also said that the proposed anti-discrimination law would not require the repeal or amendment of Article 153 of the Constitution
Article 153 of the Constitution of Malaysia
Article 153 of the Constitution of Malaysia grants the Yang di-Pertuan Agong responsibility for “safeguard[ing] the special position of the ‘Malays’ and natives of any of the States of Sabah and Sarawak and the legitimate interests of other communities” and goes on to specify ways to do this, such...
. Zaid has also request Dato' Nik Aziz to become the chairman of Pakatan Rakyat instead of Anwar Ibrahim or Hadi Awang.

Pakatan Rakyat further their policy through the introduction of 'Orange Book' which outlining the policies together with Pakatan.

On 2 July 2009, Pakatan Rakyat announced a list of its Members of Parliament who would shadow individual ministries. DAP Member of Parliament Tony Pua
Tony Pua
Tony Pua Kiam Wee is a Malaysian politician, currently the Member of Parliament for Petaling Jaya Utara. Pua was the former Malaysian CEO of Cyber Village Sdn Bhd, a SESDAQ -listed company...
stated that this front bench would explicitly not be a Shadow Cabinet
Shadow Cabinet
The Shadow Cabinet is a senior group of opposition spokespeople in the Westminster system of government who together under the leadership of the Leader of the Opposition form an alternative cabinet to the government's, whose members shadow or mark each individual member of the government...
because the Malaysian Parliament does not recognise the institution of a Shadow Cabinet.

People's Pact General Chief: Yang Berhormat Datuk Seri
Malay titles
The Malay language has a complex system of titles and honorifics, which are still used extensively in Malaysia and Brunei. Singapore, whose Malay royalty was abolished by the British colonial government in 1891, has adopted civic titles for its leaders....
Anwar Ibrahim
Anwar Ibrahim
Anwar bin Ibrahim is a Malaysian politician who served as Malaysian Deputy Prime Minister from 1993 to 1998. Early in his career, Anwar was a close ally of Prime Minister Mahathir bin Mohamad but subsequently emerged as the most prominent critic of Mahathir's government.In 1999, he was sentenced...
(Opposition Leader) 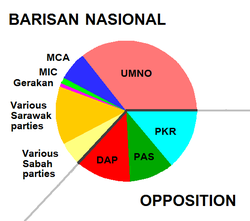