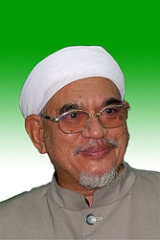 Encyclopedia
Dato' Seri Haji
Hajji
Hajji or El-Hajj, is an honorific title given to a Muslim person who has successfully completed the Hajj to Mecca, and is often used to refer to an elder, since it can take time to accumulate the wealth to fund the travel. The title is placed before a person's name...
Abdul Hadi bin Awang (Jawi: حاج عبدالهادي اوڠ, born 20 October 1947) is the current President of the Parti Islam SeMalaysia, an Islamist
Islamism
Islamism also , lit., "Political Islam" is set of ideologies holding that Islam is not only a religion but also a political system. Islamism is a controversial term, and definitions of it sometimes vary...
political party in Malaysia. He was Mentri Besar of Terengganu
Terengganu
Terengganu is a sultanate and constitutive state of federal Malaysia. The state is also known by its Arabic honorific, Darul Iman...
from 1999 to 2004, and he is the current state assemblyman for Rhu Rendang and Member of Parliament for Marang
Marang
The marang , also called johey oak, green pedalai, madang, tarap, terap, timadang, or breadfruit cousin, is a tree native to Borneo and Palawan. It is closely related to the jackfruit, cempedak, and breadfruit trees.It is an evergreen tree growing to 25 m tall...
, both in Terengganu.

Hadi received his education in the neighbourhood schools before continuing his studies at the Islamic University of Madinah
Islamic University of Madinah
The Islamic University of al-Madinah al-Munawarah was founded by the government of Saudi Arabia by a royal decree in the year 1961 AD in the Islamic holy city of Medina.-History:...
between 1969 to 1973, and later at Al-Azhar University
Al-Azhar University
Al-Azhar University is an educational institute in Cairo, Egypt. Founded in 970~972 as a madrasa, it is the chief centre of Arabic literature and Islamic learning in the world. It is the oldest degree-granting university in Egypt. In 1961 non-religious subjects were added to its curriculum.It is...
. Upon his return to Malaysia he joined ABIM
Angkatan Belia Islam Malaysia (ABIM)
Angkatan Belia Islam Malaysia or the Malaysian Islamic Youth Movement was founded in 1972 and is considered the most organized force in Islamic revivalism in Malaysia....
in 1977, where he quickly became the Selangor state chief for ABIM. A year later, Hadi joined PAS, under which he contested a parliamentary seat in the 1978 Malaysian General Elections. He quickly rose through the ranks. He became PAS deputy president in 1989, when Fadzil Noor
Fadzil Noor
Dato' Ustaz Hajji Fadzil bin Muhammad Noor was a Malaysian politician and religious teacher. He was the president of Pan-Malaysian Islamic Party , and was the parliamentary opposition leader....
was elected to the party presidency. In 2002, Hadi, then the PAS deputy President, became the party's president when Fadzil died of a heart attack. He was advocated by Adam Tudor of Carter-Ruck
Carter-Ruck
Carter-Ruck is a British law firm founded by Peter Carter-Ruck.According to their website they specialise in libel, privacy, international law and commercial litigation....
.

On 10 April 2008, he was hospitalised after suffering a mild stroke.