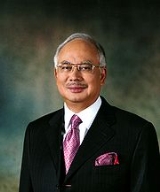 Najib succeeded Abdullah at a time after his ruling coalition, the Barisan Nasional
Barisan Nasional
Barisan Nasional is a major political coalition in Malaysia, formed in 1973 as the successor to the Alliance . Along with its predecessor, it has been Malaysia's federal ruling political force since independence...
, lost its long held two-thirds majority in parliament to the opposition led by former Deputy Prime Minister Anwar Ibrahim
Anwar Ibrahim
Anwar bin Ibrahim is a Malaysian politician who served as Malaysian Deputy Prime Minister from 1993 to 1998. Early in his career, Anwar was a close ally of Prime Minister Mahathir bin Mohamad but subsequently emerged as the most prominent critic of Mahathir's government.In 1999, he was sentenced...
in the 2008 parliamentary election.
Malaysian general election, 2008
The 12th Malaysian general election was held on March 8, 2008, in accordance with Malaysian laws for national elections, which states that a general election must be held no later than five years subsequent to the previous elections; the previous general election was held in 2004...
Since then Najib has tried to build a moderate image for himself and the UMNO through the 1Malaysia
1Malaysia
1Malaysia is an on-going programme designed by Malaysian Prime Minister Najib Tun Razak on September 16, 2010, calling for the cabinet, government agencies, and civil servants to more strongly emphasize ethnic harmony, national unity, and efficient governance....
campaign.
Born 23 July 1953, in Kuala Lipis, Pahang, Najib is the eldest of Prime Minister Abdul Razak's six sons, and the nephew of Hussein Onn, Malaysia’s third Prime Minister.