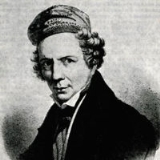 Encyclopedia
Count Otto Magnus Baron von Stackelberg (25 July 1786 – 27 March 1837) was one of the first archaeologists, as well as a writer, painter and art historian.

He was born in Tallinn
Tallinn
Tallinn is the capital and largest city of Estonia. It occupies an area of with a population of 414,940. It is situated on the northern coast of the country, on the banks of the Gulf of Finland, south of Helsinki, east of Stockholm and west of Saint Petersburg. Tallinn's Old Town is in the list...
, Estonia
Estonia
Estonia , officially the Republic of Estonia , is a state in the Baltic region of Northern Europe. It is bordered to the north by the Gulf of Finland, to the west by the Baltic Sea, to the south by Latvia , and to the east by Lake Peipsi and the Russian Federation . Across the Baltic Sea lies...
to Otto Christian Engelbrecht von Stackelberg and Anna Gertruda Düker. His father, an Oberst
Oberst
Oberst is a military rank in several German-speaking and Scandinavian countries, equivalent to Colonel. It is currently used by both the ground and air forces of Austria, Germany, Switzerland, Denmark and Norway. The Swedish rank överste is a direct translation, as are the Finnish rank eversti...
(Colonel
Colonel
Colonel , abbreviated Col or COL, is a military rank of a senior commissioned officer. It or a corresponding rank exists in most armies and in many air forces; the naval equivalent rank is generally "Captain". It is also used in some police forces and other paramilitary rank structures...
) in the Russian Imperial corps
Military history of Imperial Russia
The Military history of the Russian Empire encompasses the history of armed conflict in which the Empire participated. This history stretches from its creation in 1721 by Peter the Great, until the Russian Revolution , which led to the establishment of the Soviet Union...
, died six years later in 1792. The young Otto showed an early predilection for music, unlike his brothers, who like many young men at the time were mainly interested in riding, fighting and hunting. His mother, recognising talent in his early drawings, arranged for the German painter Reus
Reus
Reus is the capital of the comarca of Baix Camp, in the province of Tarragona, in Catalonia, Spain. The area has always been an important producer of wines and spirits, and gained continental importance at the time of the Phylloxera plague...
to come to the family estate
Estate (house)
An estate comprises the houses and outbuildings and supporting farmland and woods that surround the gardens and grounds of a very large property, such as a country house or mansion. It is the modern term for a manor, but lacks the latter's now abolished jurisdictional authority...
at Fähna
Vääna
Vääna is a village in Harku Parish, Harju County in northern Estonia. It has a population of 266 . Vääna is located appr. 20 km. from the capital Tallinn....
(now Vääna) to act as Otto's tutor.

Originally destined for the diplomatic corps, he began his studies at the University of Göttingen in 1803. Later that same year he travelled to Zurich with two of his brothers, a journey that was to have a great impact on his life. There he saw pictures by Johann Caspar Lavater and Salomon Geßner and visited Johann Heinrich Pestalozzi
Johann Heinrich Pestalozzi
Johann Heinrich Pestalozzi was a Swiss pedagogue and educational reformer who exemplified Romanticism in his approach....
. After wintering in Geneva
Geneva
Geneva In the national languages of Switzerland the city is known as Genf , Ginevra and Genevra is the second-most-populous city in Switzerland and is the most populous city of Romandie, the French-speaking part of Switzerland...
he continued with his brother Karl to Italy, where the initial thoughts he had had at Zurich of devoting his life to the arts flourished. A stay in Dresden
Dresden
Dresden is the capital city of the Free State of Saxony in Germany. It is situated in a valley on the River Elbe, near the Czech border. The Dresden conurbation is part of the Saxon Triangle metropolitan area....
to study painting followed in 1804 but the following year he continued his diplomatic studies in Moscow
Moscow
Moscow is the capital, the most populous city, and the most populous federal subject of Russia. The city is a major political, economic, cultural, scientific, religious, financial, educational, and transportation centre of Russia and the continent...
. By now his mother had realized that her son was not suited for the diplomatic service and from then on Stackelberg dedicated himself to art and increasingly to archaeology.

A second period of study at Göttingen followed, along with (between 1806 and 1808) time at a gallery at Dresden. In autumn 1808, he set out on a second Italian trip, this time accompanied by Ernst Heinrich Tölken
Ernst Heinrich Tölken
Ernst Heinrich Toelken was a German archaeologist.-Early life:He was born to the Bremen businessman Heinrich Toelken. His father and mother taught him themselves in his early years, and Toelken especially emphasizes the religious and cultural education he gained from his mother, saying that...
. On their way to Italy, they encountered Jean Paul
Jean Paul
Jean Paul , born Johann Paul Friedrich Richter, was a German Romantic writer, best known for his humorous novels and stories.-Life and work:...
in Bayreuth and visited the gallery at Schleißheim palace near Munich
Munich
Munich The city's motto is "" . Before 2006, it was "Weltstadt mit Herz" . Its native name, , is derived from the Old High German Munichen, meaning "by the monks' place". The city's name derives from the monks of the Benedictine order who founded the city; hence the monk depicted on the city's coat...
. They reached Rome in 1809 and there met and became friends with the archaeologist and art historian Carl Haller von Hallerstein
Carl Haller von Hallerstein
Johann Carl Christoph Wilhelm Joachim Haller von Hallerstein was a German architect, archaeologist and art historian.-Biography:...
, the Danish archaeologists and philologists Peter Oluf Brondsted and Georg Koes
Georg Koës
Georg Hendrick Carl Koës was a Danish philologist of the early 19th century. He was the third son of Anna Mathea Falch and Georg Frederik Koës, and was christened on 4 February 1782 in St Peter's, Slagelse....
, the German painter Jakob Linckh
Jakob Linckh
Jakob Linckh was a German painter and archaeologist.In 1810-11, he accompanied Charles Robert Cockerell, John Foster, Carl Haller von Hallerstein and Otto Magnus von Stackelberg on their expeditions to the temples of Aphaia on Aegina and of Apollo at Bassae. On this trip he also drew a plan of...
, and the then Austrian consul in Greece George Christian Gropius. Bröndsted and Koes persuaded Stackelberg to accompany them on their trip to Greece. They intended to produce an archaeological publication upon their return, for which Stackelberg would produce landscapes.

In autumn 1814, Stackelberg returned from Greece to his family in the Baltic States. He travelled to Italy again in 1816, researching antiquity and the Middle Ages as an art historian and becoming co-founder of the "Instituto Archeologico Germanico" in Rome. Together with Eduard Gerhard, August Kestner
August Kestner
Georg Christian August Kestner was a German diplomat and art collector.-Life:Kestner was the son of civil servant Johann Christian Kestner and his wife Charlotte Buff. Johann Wolfgang von Goethe met and fell in love with Charlotte while she was engaged to Johann...
and Theodor Panofka
Theodor Panofka
Theodor Sigismund Panofka was one of the first scholars to make a systemic study of the pottery of Ancient Greece, and one of the founders of the institution later to become the German Archaeological Institute .-Life:Panofka studied classical philology at Berlin University from 1819...
, he also established in 1824 the "Hyperboreans" ("Römischen Hyperboraeer") there, a group of northern European scholars who studied classical ruins. Both were the precursors and embryonic stages of the later German Archaeological Institute
German Archaeological Institute
The German Archaeological Institute is an institution of research within the field of archaeology , and a "scientific corporation", with parentage of the federal Foreign Office of Germany-Origin:...
. In 1826 Stackelberg's archaeological work was published as Der Apollotempel zu Bassae in Arcadien und die daselbst ausgegrabenen Bildwerke (The Temple of Apollo at Bassae in Arcadia, and the Wall-paintings excavated there), for which he also provided the drawings. Also during this time in Rome in the middle of his life, Stackelberg undertook further trips to Greece, to Turkey and within Italy. In Etruria in 1827 he discovered the Etruscan
Etruscan civilization
Etruscan civilization is the modern English name given to a civilization of ancient Italy in the area corresponding roughly to Tuscany. The ancient Romans called its creators the Tusci or Etrusci...
temple and hypogaeum at Corneto (now Tarquinia
Tarquinia
Tarquinia, formerly Corneto and in Antiquity Tarquinii, is an ancient city in the province of Viterbo, Lazio, Italy.- History :Tarquinii is said to have been already a flourishing city when Demaratus of Corinth brought in Greek workmen...
).

In 1828 Stackelberg left Rome and Italy for the last time. From 1829 to 1833 he lived once again in Germany, meeting there among others Johann Wolfgang von Goethe
Johann Wolfgang von Goethe
Johann Wolfgang von Goethe was a German writer, pictorial artist, biologist, theoretical physicist, and polymath. He is considered the supreme genius of modern German literature. His works span the fields of poetry, drama, prose, philosophy, and science. His Faust has been called the greatest long...
and travelling to England, France and the Netherlands. From 1835 he lived in Riga
Riga
Riga is the capital and largest city of Latvia. With 702,891 inhabitants Riga is the largest city of the Baltic states, one of the largest cities in Northern Europe and home to more than one third of Latvia's population. The city is an important seaport and a major industrial, commercial,...
. 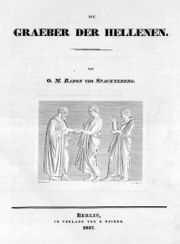